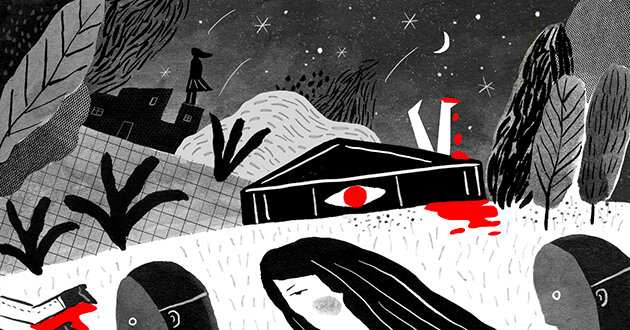 For a psychopath, Chloe Sevre is unusually astute about what social media can say about a person. “Will Bachman drinks too much and hangs out with people who don’t look after him,” she notes, analyzing the Instagram account of a fellow college student she intends to murder in Vera Kurian’s NEVER SAW ME COMING (Park Row, 400 pp., $27.99). “Will Bachman has 60 days to live.”

This book’s high-concept premise is that Chloe and six other students, all psychopaths, have enrolled in a secret program at John Adams University to help them become productive, noncriminal members of society. (They get free tuition in exchange for participating.) Chloe’s elaborate plan for killing Will, who sexually assaulted her in high school, is complicated by the fact that other members of the program are being murdered, one by one. Can she trust Charles, who is hot and clever, and avoid being killed herself?

It is an absurd idea, but done with panache and wit. I devoured this riveting book through a day of travel — in a taxi, at the T.S.A. checkpoint, on the plane, in the next taxi — and into the night. My desire to rush to the end clashed with my desire to savor every word. Who would be the last psychopath standing?

As an antihero, Chloe is more Dexter than Ripley — a bad person with a moral compass of sorts, someone you can’t help rooting for. And as quixotic as it is, the psychopath-rehabilitation program in which she’s enrolled demonstrates an admirable belief in the redemptive possibilities of the human race. Are the participants learning anything? As one says, “I learned to at least resemble a human being.”

“I have wanted, many times in the last 18 years, to reach out to you,” reads the letter sent to Paloma Evans’s adoptive parents from the Sri Lankan orphanage that was once her home. “To let you know of the terrible truth surrounding the adoption of Paloma.”

We long to find out what this horrible secret is, of course, but in the fiendish, full-of-twists MY SWEET GIRL (Berkley, 372 pp., $26), the Sri Lankan author Amanda Jayatassi keeps us guessing and worrying until the very end. Whatever it is, it is tormenting Paloma. Brought to San Francisco as a young girl by loving parents who have given her a “perfectly wonderful life that never felt like it was mine to begin with,” she says, she is now a 30-year-old mess.

As Paloma confronts a series of bewildering crises in the present that make her question if she’s just being paranoid or if people are genuinely out to get her, we’re brought back, in alternate chapters, to her life in the orphanage. Who wouldn’t want to escape from Little Miracles Girls’ Home? Among other things, one of the residents is covered in burns and prone to hovering menacingly over other girls’ beds at night and saying things like, “When you die, can I have your skin?”

Foulmouthed and self-destructive, a heavy drinker who’s not above framing other people for her own advantage, Paloma does her best to push the reader away, as she has always pushed her parents away. (They love her just the same. They’re away on vacation, but in their postcards they call her “my sweet girl.”) As her past collides with her present, you begin to understand something of the confluence of forces that brought her here. Culpability is a relative thing. There’s more than one villain in this story.

The opening pages of Julia Dahl’s THE MISSING HOURS (Minotaur, 278 pp., $25.99) sound wearyingly, awfully familiar. Claudia Castro, an N.Y.U. freshman, wakes up in her dorm room covered in bruises, her skirt hiked up and her underwear missing. She has no memory of how she got there. “The details of whatever happened were gone from her mind, but present all over her body,” Dahl writes.

But this isn’t a book about how nobody believes her; it’s a book about how she plots to take back her life from the two classmates who wronged her. (Yes, they were dumb enough to make a video.) What starts as a story about rape and victim-blaming turns into an adventure thriller as Claudia goes into hiding to orchestrate her revenge, her family tries to find her and the shady father of one of her assailants works to shut the whole thing down.

There are payoffs and bribes, attacks with a baseball bat and a box cutter, people taking drugs, a guy with a gun, questions about money and class and the way that bad parenting leads to bad kids, and a great reckoning with the moment we find ourselves in. Claudia’s rich, privileged family might be right out of “Gossip Girl,” but they earn our admiration.

“People are getting sick of this feminist ‘me too,’ ‘rape culture,’” the brother of one of the boys who assaulted Claudia tells her mother. “Your daughter is a privileged little princess who had a temper tantrum because she got too drunk and couldn’t keep her legs together. And now my brother’s life is ruined.”

“Your brother is a rapist,” Claudia’s mother says.