A spinoff of “The Goldbergs” debuts on ABC. And Rodrigo Cortés’s horror film “Down a Dark Hall” is available to stream.

SCHOOLED 8:30 p.m. on ABC. Adam F. Goldberg trades Toto for Nirvana in this spinoff of “The Goldbergs” — Goldberg’s successful sitcom built partly on nostalgia for the 1980s. In “Schooled,” he and the writer Marc Firek (both creators of the new show) move a decade ahead to the ’90s, where AJ Michalka’s character, Lainey — previously a fashion school dropout with rock singer aspirations — is beginning a job as a teacher at the prep school she once attended. Tim Meadows’s guidance counselor character is now a principal.

THE DICTATOR’S PLAYBOOK 10 p.m. on PBS (check local listings). The first episode of PBS’s new documentary series on dictators follows the rise of the North Korean leader Kim Il Sung, who began the Kim dynasty and the Korean War during his reign, from 1945 until he died in 1994. The episode begins with his death, after which, the journalist Jean H. Lee explains, the country was “shocked because they had been raised to think of him as a god; they didn’t know that he was even mortal.” The program pays special attention to the use of fear, violence and propaganda by several dictators and draws parallels among their tactics; later episodes cover Benito Mussolini, Idi Amin, Saddam Hussein and others. 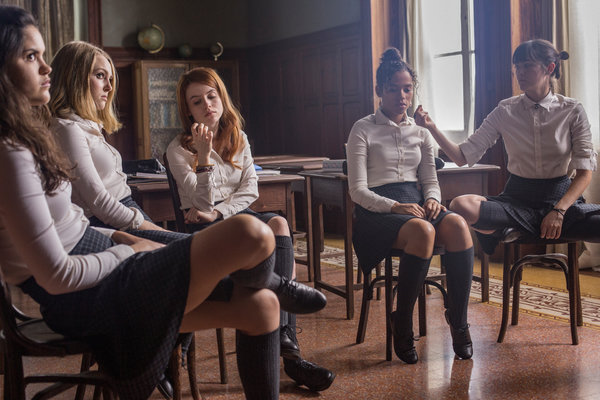 DOWN A DARK HALL (2018) on HBO streaming services and Vudu. This oddball horror film from Rodrigo Cortés concerns a teenager (AnnaSophia Robb) who is sent to a boarding school led by a strict headmistress (Uma Thurman). She eventually finds out that the source of creative inspiration at the school stems from the souls of dead artists, who possess young students. In her review for The New York Times, Teo Bugbee wrote that Cortés “approaches the supernatural elements of this thriller with surprising elegance, using the film’s sound mix to wring scares from shrouded horrors.” She called the movie “genuinely strange.”

THE COMMUTER (2018) on Hulu. The first thing you should know about this Jaume Collet-Serra-directed action movie is that it stars Liam Neeson as a middle-aged former cop. You can probably fill in some of the blanks: Neeson’s character sees his life of suburban contentment shattered, in this case after a mysterious woman, Joanna (Vera Farmiga), offers him $100,000 to identify another passenger on his commuter train. Punches are thrown. Neeson’s suit stays in one piece when you think it shouldn’t. But in his review for The Times, A. O. Scott wrote that the film’s first act holds some tonal surprises. “Until the particulars of Joanna’s scheme start to reveal themselves — roughly until the first fight sequence — Mr. Collet-Serra cultivates a clammy, hallucinatory, Hitchcockian vibe,” he said. After the movie settles into more standard action fare, viewers who have ridden the Metro-North Railroad can enjoy seeing familiar train cars repurposed as an arena for human punching bags.