INGLOURIOUS BASTERDS (2009) Stream on Netflix; rent on Amazon, Google Play, Vudu or YouTube. Quentin Tarantino returns to the big screen this weekend with “Once Upon a Time… in Hollywood,” a dramedy set in 1969 Los Angeles starring Brad Pitt and Leonardo DiCaprio. Ten years ago, Tarantino and Pitt joined forces in this gruesome action flick, whose title, minus the misspellings, was borrowed from Enzo G. Castellari’s 1978 war movie. Set in Nazi-occupied France, the story follows two separate plots to bring an end to the Third Reich that ultimately converge: There’s a band of Jewish-American soldiers — the so-called basterds — who land in France to scalp and kill Nazis, and then there’s a vengeful Jewish-French woman (Melanie Laurent) who runs a movie theater under a pseudonym. In true Tarantino fashion, the movie is packed with pop culture references, heaps of bloody violence and rambling dialogue. But it’s Christoph Waltz’s villain, an Austrian officer nicknamed the Jew Hunter, who steals the show. 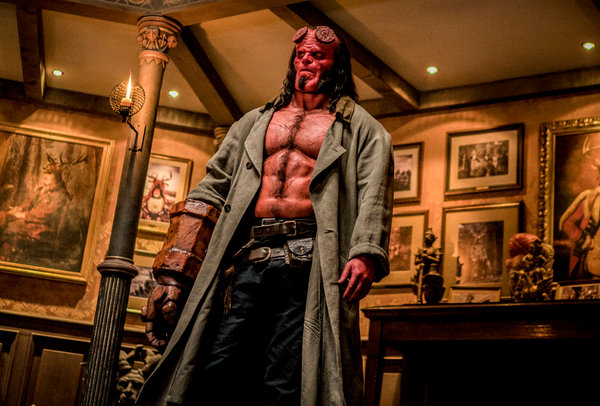 HELLBOY (2019) Stream on Amazon. Guillermo del Toro began the “Hellboy” film franchise, adapted from Mike Mignola’s cult comics, in 2004, and delivered a successful sequel in 2008, “The Golden Army.” Then he backed out of the series, and Neil Marshall stepped in to direct this reboot, which critics say doesn’t live up to its predecessors. David Harbour (“Stranger Things”) stars (and does a decent job) as the wisecracking half-demon paranormal investigator, who sets out to save the world from a sorceress (Milla Jovovich) who had been defeated — and cut up into pieces — by King Arthur. Fans of the original comics may delight in this remake's imaginative creatures, but they may also be put off by its confusing subplots and over-the-top violence.

WHO KILLED GARRETT PHILLIPS? 8 p.m. on HBO; stream on HBO platforms. For years, Potsdam, a small town in upstate New York, was consumed with a case that seemed crystal clear to so many residents. In 2011, 12-year-old Garrett Phillips was strangled to death in his home. The police identified Oral Nicholas Hillary, a soccer coach and a former boyfriend of Phillips’ mother, as the primary suspect. Hillary said he was innocent. But he was charged with second-degree murder in 2014, despite the lack of conclusive forensic evidence. The county prosecutor said the investigation was over, but two years later, Hillary was acquitted. In this new two-part documentary, those involved with the case unpack why Hillary was swept up in it and point to questions that remain unanswered.

CASH PAD 10 p.m. on CNBC. The hosts Jordan Rodgers and JoJo Fletcher (of “The Bachelorette”) help homeowners spruce up and transform their properties into coveted short-term rentals in this new series. The show begins with a married couple in Stonewall, Tex., who want to give their empty cottage a second life.