MYSTERY SCIENCE THEATER 3000 on Netflix. It’s been 30 years since this cult series, known for its playful evisceration of B-movies, began on a Minnesota TV station. While the creator and original host, Joel Hodgson, has ceded hosting duties to Jonah Ray, the Netflix version of the show still does the same thing as the original: It shows old, campy films while riffing on them. Ray’s character is imprisoned on a spaceship by mad scientists (Patton Oswalt and Felicia Day), who force him to deliver these movie riffs alongside a pair of robot puppets (Baron Vaughn and Hampton Yount). “Until video games, movies felt like the biggest thing in the world,” Hodgson recently told The New York Times. “So we had to be in awe of them: ‘Don’t do anything to the movies, we need them, keep them intact, please!’ What originally motivated me to do ‘Mystery Science Theater 3000’ was my impulse to respond: ‘Oh, you can talk back to these things.’”

DAMASCUS COVER (2018) on Hulu. John Hurt’s last role was as an Israeli intelligence director in this spy thriller, which follows a Mossad agent (Jonathan Rhys Meyers) in Syria, where he eventually encounters a photojournalist played by Olivia Thirlby. The plot is confused, Helen T. Verongos wrote in her review for The Times, and the film will “leave the viewer hungry for a slickly executed espionage movie.” But she also wrote that the overall message “provides a worthy payoff: the idea that there are alliances that transcend religious wars and nationalistic sentiments for the sake of saving lives.” 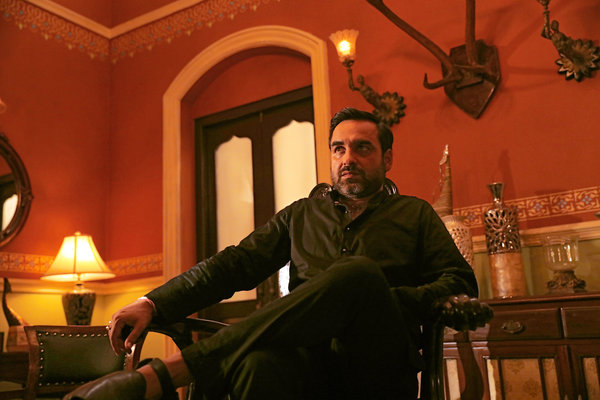 MIRZAPUR on Amazon Prime. This gritty Indian crime series centers on a wealthy carpet exporter (Pankaj Tripathi) who’s better known locally as the mafia don of Mirzapur, India. Some of the story’s tension comes from the power struggle between this don and his son (Divyendu Sharma). More comes in the interactions between their family and that of an upstanding lawyer, with one son played by Ali Fazal (Abdul in “Victoria & Abdul”).

A CHARLIE BROWN THANKSGIVING (1973) on Amazon. Those preparing Thanksgiving feasts this week have had a lot to consider. Should they serve sweet potato pie or pumpkin pie? Apple? Should they buy so much they’re guaranteed to eat leftovers for a week? Should they brine the turkey? In this classic animated special, the holiday feast includes jelly beans, popcorn and toast made yellow with butter — an idiosyncratic meal that fits Charles M. Schulz’s weird world.

SPIDER-MAN: HOMECOMING (2017) 9:45 p.m. on Starz. Tom Holland stars in this Spider-Man reboot, in which the young superhero is mentored by Marvel’s Iron Man (Robert Downey Jr.). Stan Lee has a cameo; if you time it right, you may be able to catch Lee in both this and IRON MAN (2008), at 8 on TNT, in which Lee appears dressed as Hugh Hefner.