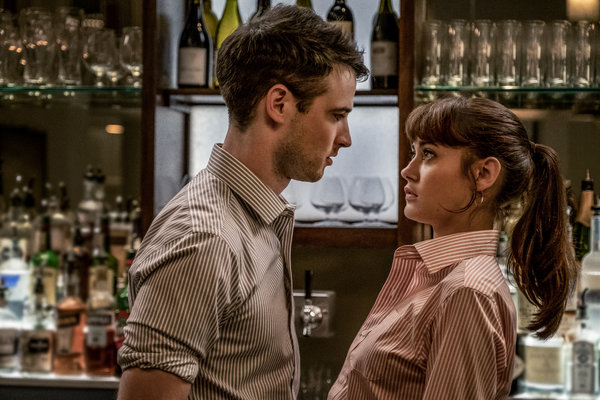 SWEETBITTER 9 p.m. on Starz. Last year Starz added this drama series — adapted from the novel by Stephanie Danler — to the list of shows about young women navigating life in the Big Apple (think “Girls” and “Sex and the City”). The focus here is on Tess (Ella Purnell), a 20-something naïf who leaves the Midwest and is offered a trial position at a high-end Manhattan restaurant. In the first season, she discovered the inner-workings of the dining world, got a taste of New York City night life and found a love interest (or two). Season 2 debuts with two back-to-back episodes and picks up after Tess has been handed the job. No longer the new girl in town, she’s a little more at ease but realizes there is plenty to learn if she wants to keep her head above water.

TOP GEAR 8 p.m. on BBC America. Despite some mishaps, this motor show is still going strong. In Season 27, the host Chris Harris returns alongside new faces Freddie Flintoff and Paddy McGuinness. Their first challenge? Buying examples of their first cars and driving them out to Ethiopia’s sweltering Danakil Depression.

GRANTCHESTER 9 p.m. on PBS (check local listings). If one crime-solving vicar doesn’t do the trick, two just might. The fourth season of this cozy mystery series sees the end of our protagonist, Sidney Chambers (James Norton), a clergyman who moonlights as a detective in 1950s England. In his place, the quaint village of Grantchester gets a new, younger priest: the rebellious reverend Will Davenport (Tom Brittney). The show, based on the series of novels by James Runcie, returns with a two-hour episode in which Sidney gets involved in the Civil Rights movement and Geordie Keating (Robson Green) looks into a slum’s shady happenings.

GONE BABY GONE (2007) Stream on Amazon, Hulu or Netflix; rent on Amazon, Google Play, iTunes, Vudu or YouTube. Ben Affleck first showed off his directing chops with this gripping thriller adapted from the Dennis Lehane novel. When 4-year-old Amanda is kidnapped from her mother’s home in working-class Boston, the child’s aunt and uncle enlist the help of the young private detectives Patrick (Casey Affleck) and Angie (Michelle Monaghan). The pair know the neighborhood well, and the family believes they can get more out of locals than the police. Still, the detectives work with the cops on the investigation and inevitably clash with them as they turn one stone after another. The loose ends will grab your attention, but it’s the personal dramas that will hold it. “‘Gone Baby Gone’ pays closer heed to the enigmas of soul and heart than to clues and guesswork,” Manohla Dargis wrote in her New York Times review. “There are false leads, dead ends, brandished guns and nightmarish discoveries, as well as shadows and controlled camerawork, but mostly there are human frailties and thrown-away, forgotten lives.”