Watch the satire “Sorry to Bother You.” Or stream the FX comedy series “Baskets.”

SORRY TO BOTHER YOU (2018) on iTunes, Amazon, Google Play, Hulu, and YouTube. The activist and rapper Boots Riley tackles societal ills in this comic, unpredictable and sometimes unsettling dystopian tale about a young slacker. At the outset, Cassius (Lakeith Stanfield) is out of a job, lives in his uncle’s garage and is behind on rent. After he lands a gig at a telemarketing firm, an older colleague suggests he use his “white voice” — which is actually that of David Cross — and the money will flow from there. The tactic works, but Cassius’s success alienates his co-workers and idealistic girlfriend (Tessa Thompson) and pulls him into a dark world that only grows stranger by the minute. In his review for The New York Times, A.O. Scott wrote, “If Mike Judge’s ‘Office Space’ and Robert Downey Sr.’s ‘Putney Swope’ hooked up after a night of bingeing on hallucinogens, Marxist theory and the novels of Paul Beatty and Colson Whitehead, the offspring might look something like this.”

YOU KIDDIN’ ME?! 3 p.m. on Facebook Watch. This celebrity family take on “Punk’d” ends its first season with the sisters Sara and Erin Foster pranking their father, the musician and producer David Foster, who thinks he’ll be mentoring aspiring producers at a restaurant but is instead set up to behave like an obnoxious diva. And all the patrons are in on the joke. 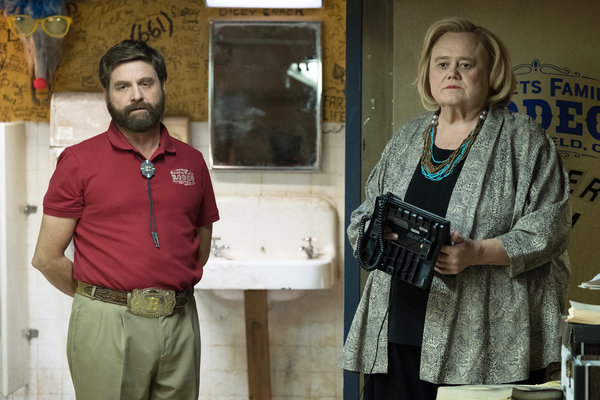 BASKETS on Amazon, Google Play, Hulu and YouTube. Stream the third season of this wry FX comedy series about a rodeo business in Bakersfield, Calif., run by a failed French clown (Zach Galifianakis), his meanspirited twin brother (also Galifianakis) and their mother (an Emmy-winning Louie Anderson). If you haven’t watched the show yet, consider starting from the beginning before it returns for a fourth season next year.

JIRO DREAMS OF SUSHI (2012) on iTunes, Amazon, Google Play, Hulu, Vudu and YouTube. This portrait homes in on the unrelenting work ethic of 85-year-old Sukiyabashi Jiro, a chef and owner of a Japanese sushi restaurant that was awarded three Michelin stars in 2008. It may verge on hagiography, but the tantalizing shots will leave your stomach rumbling.

TOMB RAIDER (2018) 8 p.m. on HBO. For better or worse, 2018 has been defined by reboots. This is one revival that came up short. Alicia Vikander stars as Lara Croft, a bike courier in London who sets out on a quest to find a mythical tomb her father had been searching for before vanishing years ago. Along the way, she survives a violent storm, comes up against a slave-owning leader who is out for the same prize and makes a startling discovery about her life. “The first ‘Tomb Raider’ movies are ridiculous, but they have their minor satisfactions,” Manohla Dargis wrote in The Times, referring to Angelina Jolie’s “badass superbabe.” But here, she adds, “Vikander never settles comfortably into Lara, whether she’s delivering the empty, often risible dialogue or running the movie’s endless obstacle course.”