Inspiring women take center stage in “Women, War & Peace II.” And an intruder upends a couple’s life in “The Salesman.”

WOMEN, WAR & PEACE II 9 p.m. on PBS (check local listings). Who runs the world? This limited series returns with four films about women who have led nonviolent movements for peace and human rights. The program begins with “Wave Goodbye to Dinosaurs,” about the Northern Ireland Women’s Coalition, a political party established in 1996 to secure representation of women in peace negotiations. (The party disbanded in 2006.) “The Trials of Spring,” which centers on three Egyptian women fighting for “bread, freedom and social justice” during the Arab Spring in 2011, follows at 10. The second half of the series airs Tuesday at 9. 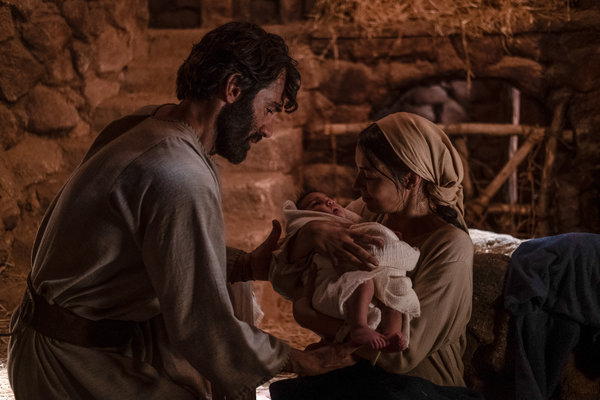 JESUS: HIS LIFE 8 p.m. on History. The biblical drama “Mary Magdalene” will hit theaters next month with Rooney Mara in the title role alongside Joaquin Phoenix as Jesus. The story of Mary — a Jewish woman who traveled with Jesus and witnessed his crucifixion and resurrection — is also told in this new series that is part drama, part documentary, along with the tales of seven other figures who played important roles in Jesus’s life. The first episode reimagines Jesus’s birth with a focus on Joseph.

ONE NATION UNDER STRESS (2019) 9 p.m. on HBO; Stream on HBO platforms. The neurosurgeon and medical reporter Sanjay Gupta crisscrosses the United States to understand why the country’s life expectancy rate has been steadily dropping in this sobering documentary by Marc Levin (“Class Divide”). Gupta emphasizes the rise of “deaths of despair” caused by cirrhosis, drug overdose and suicide, while researchers point to obesity and chronic stress. What’s important, the film conveys, is to discover the cause of the cause — which seems to be mainly greater depression and social isolation. We see the human side of the issue when Gupta visits a town in Pennsylvania where a plant closure has left hundreds of residents jobless and stressed out.

THE SALESMAN (2017) Stream on Amazon; Rent on Amazon, Google Play, iTunes, Vudu or YouTube. The Iranian filmmaker Asghar Farhadi won his second Oscar for this suspenseful drama about a married couple in Tehran. At the outset, Emad (Shahab Hosseini) and Rana (Taraneh Alidoosti), theater actors working on a production of Arthur Miller’s “Death of a Salesman,” move out of their rundown apartment before it crumbles over their heads. A fellow actor helps them settle in a new place, but the previous tenant left behind many belongings and doesn’t seem to be returning for them. Emad and Rana soon understand why the apartment is filled with clutter, but only after a troubling incident causes a rift between them and pushes Emad down a vengeful spiral. A. O. Scott named the film a Critic’s Pick in his New York Times review. “With exquisite patience and attention to detail,” he wrote, Farhadi “builds a solid and suspenseful plot out of ordinary incidents, and packs it with rich and resonant ideas.”