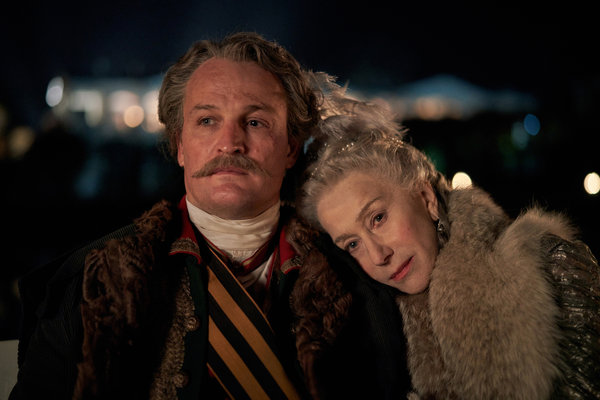 CATHERINE THE GREAT 10 p.m. on HBO. Stream on HBO platforms. Helen Mirren’s run as the Russian empress comes to a close. In the fourth and final installment of the mini-series, the aging Catherine must contend with personal and political pressures. She clashes with Grigory Potemkin (Jason Clarke), her ailing lover, and works to ensure that she gets to choose her successor. But as her country’s supreme ruler, the personal and the political are tightly woven together. She argues with Potemkin, who is also her military leader, about tactics and foreign policy, while her succession plans, one means by which she hopes to assure her political legacy, cut through her family. She struggles with her son Paul who worries that Catherine’s grip on the levers of power will remain tight even after her death.

A SINGLE MAN (2009) Stream on Netflix. Colin Firth stars in Tom Ford’s directorial debut as George, a professor living in Los Angeles in the early 1960s. He is haunted by the death of his partner, Jim (Matthew Goode). But George’s loneliness and pain are not only a consequence of his loss. His isolation, he realizes, is more existential than circumstantial and so decides to take his own life. The film, which is based on a novel by Christopher Isherwood, follows George through what he believes will be his final day and the encounters he has with his friend Charley (Julianne Moore), a flirtatious student named Kenny (Nicholas Hoult) and Carlos, a prostitute (Jon Kortajarena).

L’ENFANT SECRET (1979) Stream on Mubi. For Philippe Garrel, family it is not only a subject that he returns to again and again. It’s also an essential part of how he makes films. His father, Maurice Garrel, appeared in much of his work and, more recently, his son and daughter, Louis and Esther, have become frequent collaborators. In this autobiographical film, for which Garrel mined his relationship with the Velvet Underground singer Nico, Jean-Baptiste (Henri de Maublanc) and Elie (Anne Wiazemsky) are a couple for whom love and self destruction are not opposed. Created in the period when Garrel was starting to marry his experimental tendencies and love of silent film with more developed narratives, the story is told elliptically in beautifully shot black and white.

TRAPPED (2017-19) Stream on Amazon Prime. In the first season of this Icelandic mystery series, the residents of a small northern town are isolated by a blizzard just as a dismembered corpse is found by fisherman off the coast. Andri (Olafur Darri Olafsson), the chief of police, discovers more than he bargained for — about his neighbors, his family and himself — in pursuit of the killer. In Season 2, Andri, now a cop in Reykjavík, returns to the north to investigate a politically motivated attack on one of the country’s top officials.