A six-part drama series wraps up on TNT. And a new special about a Michael Jackson documentary is on HBO.

I AM THE NIGHT 9 p.m. on TNT. This mini-series draws from the life of Fauna Hodel, an author who, after learning she was adopted by African-American parents, discovered that one of her grandfathers was George Hodel, a prime suspect in the unsolved Black Dahlia murder of 1947. But the rest of the story is largely fiction, and “the result is a bland hodgepodge,” Mike Hale wrote in his review in The New York Times. Chris Pine, as Jay, a journalist who clings to Fauna (India Eisley) for his own reporting, may be the show’s strongest asset. In this series finale, the Watts riots erupt in Los Angeles as Jay sits in a cell and Fauna desperately searches for a way home.

AMERICA’S HIDDEN STORIES 8 p.m. on Smithsonian. The Smithsonian channel claims to shed new light on pivotal moments of American history with this series. In the first episode, scholars scour old documents and use 3-D computer mapping techniques to uncover the site of the 17th-century Salem witch trial hangings. Later episodes highlight the Spanish influenza of 1918, the treason of Benedict Arnold and a spy ring involved in the Pearl Harbor attack.

INSIDE MY HEART (2018) 9 p.m. on Starz. For nearly three years, the photojournalist and director Debra Kellner filmed three families that fled war-torn Syria and Afghanistan for safer lives elsewhere. In this touching documentary, we see the families take risky journeys, contemplating sacrifices made and the future that awaits. One refugee only looks forward and defiantly declares, “Going back is no longer an option.” 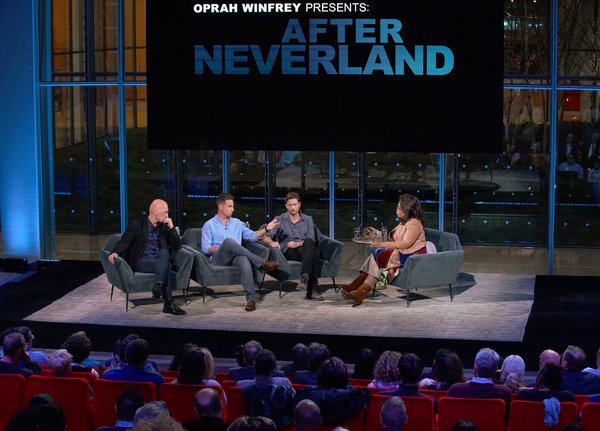 OPRAH WINFREY PRESENTS: AFTER NEVERLAND (2019) 10 p.m. on OWN and HBO; streaming on HBO platforms. This special follows the second half of the HBO documentary “Leaving Neverland,” in which Wade Robson and James Safechuck accuse Michael Jackson of abusing them from childhood into adolescence. In a recent interview with CBS, Robson said of Jackson, “I find it hard to believe that he had boys around for any other reason than to sexually abuse them.” Here, Oprah Winfrey unpacks the film with Robson, Safechuck and the director Dan Reed in front of an audience of survivors of sexual abuse.

EDWARD SCISSORHANDS (1990) Stream on Amazon or Hulu; rent on Amazon, Google Play, iTunes, Vudu or YouTube. This “Beauty and the Beast”-like fantasy drama is the first onscreen collaboration between Tim Burton and his favorite eccentric, Johnny Depp. Depp stars as the title character, a man-made creation whose inventor died before giving him human hands (hence the name). After years of isolation, Edward is discovered by a saleswoman who invites him to stay with her family in their suburban neighborhood. His shears initially frighten the residents, then he finds his place as a coveted hairstylist. But trouble begins when a teenager (Winona Ryder) falls for the innocent man behind Edward’s pale skin and lethal fingers.