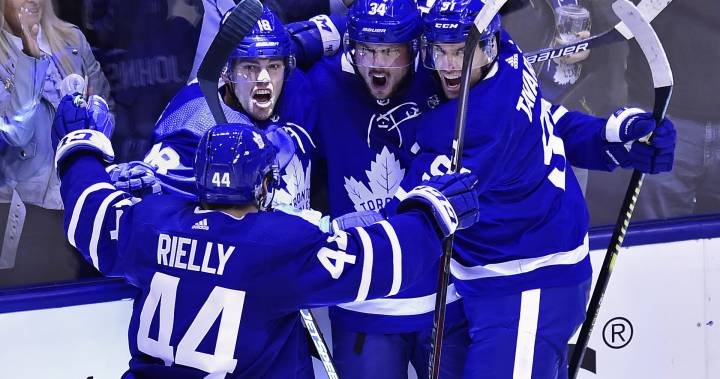 Going to a live sporting event means being immersed in a multimedia sensory overload with big-screen video, 3D projection effects, images and messages zipping around a display that runs the circumference of the arena (that’s called a “power ring,” by the way). And, of course, music. Lots and lots of music.

A few years back, an unlikely encounter led me to be hired by Maple Leaf Sports and Entertainment to revamp the music heard within the confines of the ACC (now the Scotiabank Arena) before, during, and after Maple Leaf home games. Not only was the team rebuilding on the ice, behind the bench, and in the front office, there was a renewed focus on the fan experience. Part of the mission was to refresh the Leafs’ musical image.

In-game music is the domain of a division called game operations. This department executes all the stuff we hear and see in the arena beyond the game itself. The person in charge of game ops creates a script that details every sponsored moment, every non-game video segment, every PA announcement, every break for a contest in the crowd, and any special effects required. In the case of my tenure with the Leafs, the game ops guy sat in a room in the press box with organist Jimmy Holmstrom (he actually plays a number of keyboards) and a person in charge of playing all the music — the team DJ.

After a front office briefing on what kind of sonic image the team was hoping to create, I went to work with Dave, my partner in this venture.

We began by researching the musical preferences of Leaf fans using data from a number of proprietary sources used by radio stations and record labels. Songs evaluated on the basis of era, energy, genre, key, subject matter, and even the image and reputation of the artist. For example, Gary Glitter’s Rock and Roll Part 2, once a global sports anthem, is completely toxic since Glitter’s conviction on pedophile charges.

Knowing the Toronto hockey fans are steeped in tradition and had strong opinions about everything involved in going to a game, we ran a preliminary list of songs past game ops and several people in the front office. At the time, fan sentiment leaned strongly towards rock, which was also the safest when it came to intergenerational tastes. We also sprinkled things with a few current pop, country, dance, and hip-hop tracks that we’d end up changing up every six weeks. The longest conversation was the goal song, the track played every time the Leafs scored. (We eventually decided on Feelin’ Good by The Sheepdogs.)

Another consideration was the needs of a major record label who paid for the privilege of having a slight majority of a game’s music come from artists on its roster. Anything played during the game had to conform to the terms of that contract.

There are anywhere from 60-80 moments within a game during which the DJ needs to play something appropriate for the situation. He or she needs to create a soundtrack for the game in real time. To increase the DJ’s reaction time, some 500 songs are plugged into a spreadsheet and then separated into categories for use in specific situations. Here are a few of the categories we used.

Pre-game music: As fans make their way into the arena, music plays an important part in setting the mood. Here the DJ has the greatest latitude as he/she slowly builds excitement.

Warm-up music: This varies from team to team. In the case of the Leafs during my time in game ops, the players nominated one of their own to create a 15-minute mix which was switched up occasionally during the season. During my time with game ops, the teams preferred some heavy EDM/dubstep.

Standard situations: Certain moments in the game require the same song every time throughout the season. That includes when the home team hits the ice. With the Leafs, Joker and the Thief from Wolfmother was a big favourite as was [email protected]#king in the Bushes by Oasis.

Hype/get loud songs: Tracks designed to raise the energy of the crowd. The most impactful songs tend to be AC/DC’s Thunderstruck, Rock and Roll from Led Zeppelin, and the ultra-ubiquitous Seven Nation Army from The White Stripes. Those and a few others are universally beloved by all crowds across all sports the world over.

Incidental songs: Whenever there’s a stoppage in play for a TV timeout, a quick scrape of the ice, a player injury and so on, the gap has to be filled with music. It doesn’t make sense to play a hype song during such a long break, so you need a bunch of songs that will maintain the energy without pushing the crowd too far.

Crowd cam songs: The Kiss Cam, Dance Cam, and all the other times featuring shots of the crowd all need their own songs.

Fight songs: Fights required their own musical choreography and thus their own category. (You Gotta) Fight for Your Right (to Party) from The Beastie Boys was a favourite, although it’s always fun to inject a little humour with something like Bowie’s Let’s Dance or maybe the theme from Mortal Combat.

Opposition goals: The crowd always sags following an opposition goal, so it’s important that the music following offer hope. Mid-tempo major key songs like I Won’t Back Down from Tom Petty seemed to work as did Don’t Fear the Reaper from Blue Oyster Cult. It also didn’t hurt to throw in Stronger (What Doesn’t Kill You) from Kelly Clarkson. If it’s a blowout, Don’t Stop Believin’ from Journey is a safe pick.

Leaf penalty: No one likes to see the home team play shorthanded. Time to play something like Problem from Ariana Grande and Iggy Azalea or The White Stripes’ Icky Thump.

Shoot-out music: Time for something to maximize the excitement and tension. One of the best bits to play is the opening guitar sequence from Welcome to the Jungle by Guns N’ Roses.

Post-game music: Did the team win or lose? The DJ needs to match the music to the mood as everyone files out.

Once all the songs were neatly categories, MP3s were loaded into a special music playback program similar to iTunes but much, much more powerful and specifically designed for live sporting events. It allowed for even more manipulation of the music for ultra-fast access. With only a second or two to react, you can’t have the DJ fumbling to fast-forward to the chorus of Rock and Roll All Nite from KISS. With this software, that clip and hundreds of others can be prepared for instant playback.

Even after things were all organized and loaded, game music required constant maintenance. I spent many a night in the press box gauging crowd reaction to songs, then swapping tracks in and out in pursuit of the perfect music mix. We also made roadtrips to Tampa, Columbus, LA, and Edmonton to spy on what other teams did with their in-game music.

But all things must pass. My time with the Leafs lasted two seasons before the game ops division was reorganized for the team’s 100th anniversary. For a music and hockey fan, it was an amazing experience.

Alan Cross is a broadcaster with 102.1 the Edge and Q107, and a commentator for Global News.