The Los Angeles photographer John Houck creates multiple layers of visual trickery in deceptively simple still lifes by shooting and reshooting life-size color prints that he alters as he goes. In “Accumulator #20, 3 Colors #B2DAE5, #B4867B, #B46E5C,” for example, the diptych that opens his first solo show at Marianne Boesky’s New York gallery, “Holding Environment,” he folded the prints before reshooting to incorporate vivid trompe l’oeil creases, complete with graded shadows, in the final images. But the actual prints on display, carefully floated behind glass, are also creased, and it’s the difficulty of distinguishing the “real” folds from the illusory ones that gives the work its substance. What other deceptive appearances, you have to wonder, have taken you in on your way into the gallery?

Most of the work in the exhibition, however, is concerned less with truth and perception than it is with painting. Along with bits of blue tape, frayed canvas edges and lots more colored paper, Mr. Houck has begun photographing his own rudimentary oil paintings. There's a domestic scene in one photograph, and hands holding bicycle handlebars or a cellphone in others. The overall compositions look great, but the point of incorporating paintings, unfortunately, isn't really clear. Photography’s fraught and complicated relationship to the older genre may be too heavy a subject for Mr. Houck’s austere approach. 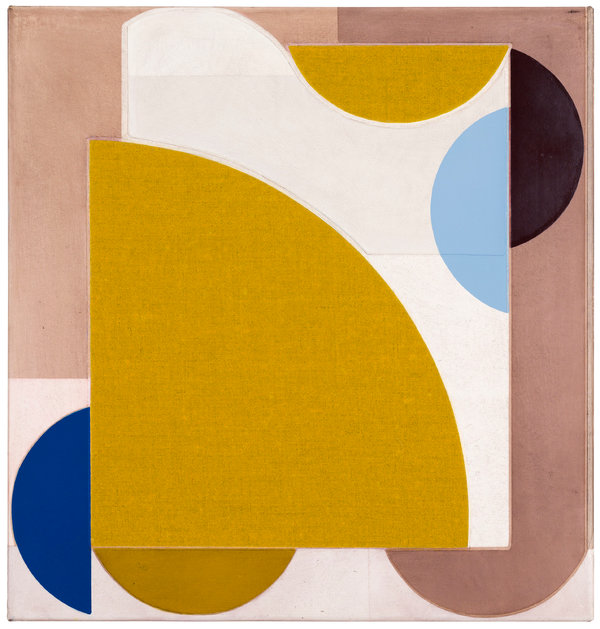 Svenja Deininger’s “Crescendo,” open concurrently at Boesky Gallery’s space next door, also excels at satisfying the demand that contemporary art should both look like something and be about something. But what this Viennese painter’s work looks like is what it’s about: Building up body with coat after coat of gesso, stripping off paint with turpentine and scraping sharp borderlines between brilliant colors, Ms. Deininger uncovers extraordinary beauty in her materials.

She also, as if in passing, makes use of subtle optical tricks like Mr. Houck's. In one small, nearly square, untitled canvas, she surrounds a golden quarter circle with narrow rectangular sections of beige and off-white. Smaller half circles of indigo, black, light blue and the same yellow gold enliven this arrangement; an elegant white double curve shape stretches across the center all the way to the top edge. Because the golden part is brighter, and in the center, it looks overset until you get close to the surface. Then, suddenly, because the off-white and beige sections are so thickly applied, while the gold is so thin you can see the canvas’s weave, the image reverses itself. WILL HEINRICH

Didier William’s works are often called paintings because they are rectangular, mounted on the wall and approximate the size of traditional easel paintings. The works in “Curtains, Stages, and Shadows, Act 1” at James Fuentes and “Curtains, Stages and Shadows, Act 2” at Anna Zorina, however, are barely painted at all. Instead, Mr. William’s method is a clever mix of different two-dimensional mediums: He carves directly into birch panels and arranges his own patterned prints on the surface, using ink and the occasional dash of acrylic paint for emphasis.

This approach, through appearance and illusion, also suits the subject matter of Mr. William, who was born in Haiti. Drawn from the country’s history and folklore, as well as his experience of growing up in Miami, his works also probe the idea of having to perform blackness or any kind of identity. Shadowy figures — built from hundreds of tiny eyes that carved into the panels like pixels and return the viewer’s gaze — represent family members, Voodoo spirits or leaders in the Haitian Revolution. (Mr. William shifted from abstract painting to representing black bodies after Trayvon Martin, an unarmed teenager, was shot to death in 2012.) And machetes suggest violent massacre as well as “tire machet,” the traditional Haitian martial art.

Mr. William’s crafty, enigmatic and sometimes cryptic oeuvre is underscored by his titles, which are in untranslated Haitian Kreyòl, and include proverbs, family expressions and crude street slang. None of theatrical effects would matter, though, if Mr. William’s paintings didn’t grab your attention and hold it, building a sense of tension — even anticipation for Act 3. MARTHA SCHWENDENER

‘Works From the Collection of John Ashbery’

The poet and critic John Ashbery described his friend, the painter Fairfield Porter, in a 1983 Newsweek review, as “one of those innovators whose originality can come perilously close to seeming old-fashioned.” It’s an apt gloss for Porter’s 1952 portrait “John Ashbery (Argyle Socks),” as well as for most of the two dozen other demure treasures making up “Works From the Collection of John Ashbery” at Kasmin. (Ashbery died in 2017, leaving instructions that his extensive art collection, only a small portion of it represented in this show, be sold to support experimental artists working now.)

Showing Ashbery sprawled on a leather sofa in gray slacks and tan sport jacket, with an expression somewhere between ease and irritation, Porter’s painting seems to be in earnest pursuit of a fidelity to mundane appearances, which was out of date even by the ’50s. But Porter’s attention actually cuts much deeper. By treating every small natural force as its own separate problem — registering the drape of his sitter’s pants with long, taut brush strokes, or the reflection from a cheekbone with a spot of pink impasto — he transforms an ordinary portrait into a phenomenal snapshot of the room as a whole.

The high contrast and graphic simplification of Alex Katz’s “Untitled (Rose),” a four-foot-square 1966 painting of an enormous white blossom against a dense, maroon background, let it function as a flat icon despite its buttery highlights, while the shapes that make up the face, fedora and gray lapels of Jean Hélion’s “Eduard” (1943) produce a strange kind of visual pressure very much like depth. But the show’s most daring, undercover masterpiece may be Jane Freilicher’s “The Painting Table” (1954). Its scattering of paint tubes evokes metallic crinkles despite Freilicher’s gauzy style, and the blue and green strokes she’s marked on the palette — are they “daubs,” or simply daubs? WILL HEINRICH 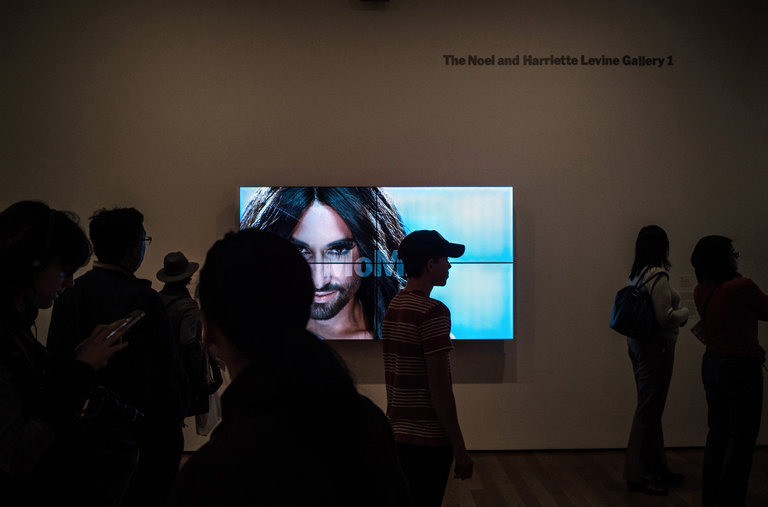 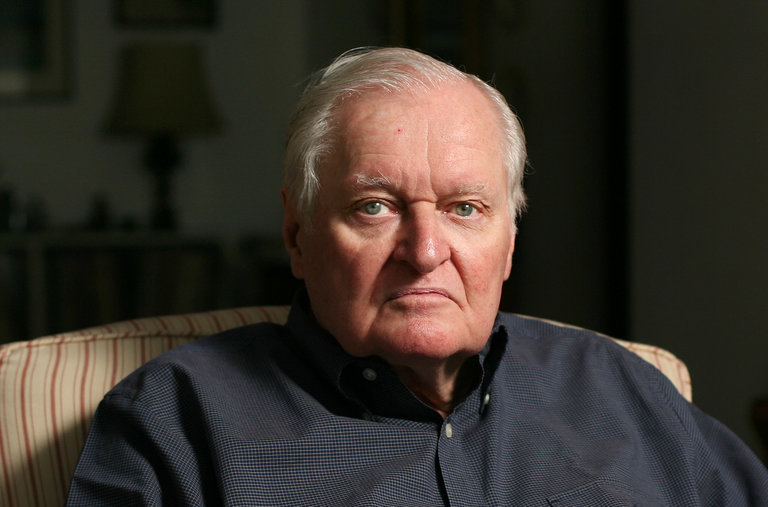