LOS ANGELES — Fluxus is fraught with contradiction. The interdisciplinary art movement, which emerged in the 1960s, is funny but serious; indefinite but authoritative; destructive but full of possibility.

So perhaps it is only fitting that Fluxus — for all its anti-bourgeois, anti-establishment, even anti-art swagger — is being celebrated here by the Los Angeles Philharmonic and the Getty Center, institutions with the baggage of corporate sponsors, an aging clientele and the cultural canon.

Yet, with sensitive programming and musicality both rigorous and open-minded, the two organizations have assembled a convincing festival of Fluxus music for the Philharmonic’s 100th-anniversary season. If Fluxus is about questioning the nature of art, then this festival is about an orchestra questioning the boundaries of performance as it reflects on the past century and looks ahead to the next.

“Fluxus forces us to think about how and why we do what we do,” said the composer and conductor Christopher Rountree, who organized the festival with Nancy Perloff of the Getty.

They have assembled music by some of the movement’s icons like La Monte Young and Yoko Ono, as well as George Maciunas, who coined the term Fluxus and wrote its scrappy manifesto in the early 1960s. Works by those artists, and about a dozen more, will be featured in a marathon performance at Walt Disney Concert Hall on Nov. 17.

Fluxus pieces will also be paired with more conventional programming. In the past few days, for example, people coming to hear Sibelius’s “The Tempest” have been greeted with George Brecht’s “Drip Music” outside before taking their seats.

“I think the audience who is used to going to the concert hall is going to realize right away that this is different,” Ms. Perloff said.

Of course, programming also includes John Cage, Fluxus’s father — though he is said to have preferred the term uncle. (He wasn’t the only one to resist association with the movement; in an interview, Mr. Young said he doesn’t consider himself a Fluxus artist, since it makes an anti-art statement and he views his music as “some of the most beautiful art in the world.”)

As a teacher at the New School for Social Research in the ’50s, Cage preached the gospel of chance and possibility in music. Those principles guide performances of his “Europeras 1 & 2,” a wild sendup of the European opera tradition, which last week received a rare and extraordinary staging by Yuval Sharon and his experimental company, the Industry, as one of the first major Fluxus Festival events of the season.

The scores of many Fluxus compositions are one-sentence directions like “Please wash your face” and “Draw a straight line and follow it.” Cage described his “Europeras” with similar concision: “For 200 years the Europeans have been sending us their operas. Now I’m sending them back.”

Created for the Frankfurt Opera in 1987, the piece was an anarchic pastiche of opera history. Elements of the production — musicians, costumes, lighting, set design — existed independently, sometimes harmoniously but often not, and they were presented through chance operations on a stage laid out in a grid of 64 hexagrams like the I Ching, the Chinese book of divination that inspired Cage. 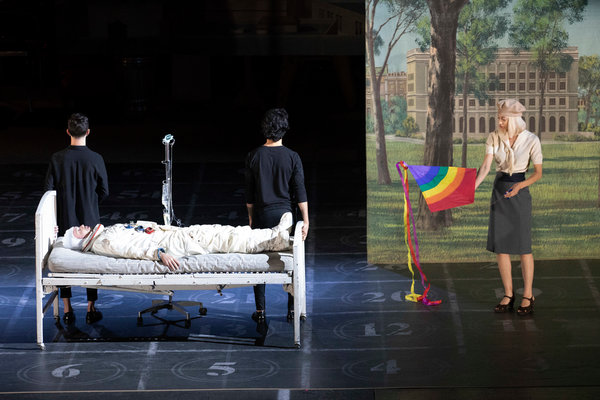 There’s a reason, aside from its difficulty, that this work doesn’t get staged in the United States. “Europeras” — which suggests the phrase “your operas” — amounted to a rejection of European art, returning it whence it came. And the piece’s concept relied on the nature of an opera house like Frankfurt’s: a repository of the costumes, sets and institutional expertise of a centuries-long history.

Mr. Sharon, who put a feminist spin on Wagner’s “Lohengrin” this summer at the Bayreuth Festival, came up with a creative solution to bringing “Europeras” across the Atlantic without contradicting its conceit: He staged it in the cavernous Stage 23 at Sony Pictures Studio in Culver City. If opera is the great European art form, his production argues, then movies are the American analogue.

In executing this idea, Mr. Sharon’s “Europeras” was loyal to the work’s Fluxus spirit while playfully satirizing Hollywood history. In the absence of opera sets and costumes, this production raided the collection of the film studio: hand-painted backdrops and a wide selection of outfits like everyday attire and the gaudy armor of epics in the vein of “Cleopatra.”

Everything was familiar; nothing was connected. Verdi’s “Un Ballo in Maschera” was interrupted by Ghostface from “Scream.” A tuba played “The Flight of the Valkyries” as, fittingly, a donkey piñata was hoisted from the rafters. Backdrops came down in front of singers mid-aria, and occasionally “Truckera,” a prerecorded track of 101 layered fragments from European operas, briefly drowned out everything like a passing subway train.

The juxtapositions were sometimes enlightening, revealing how Hollywood and opera share similar visual language and emotional sweep. But most often they were laugh-out-loud funny.

Mr. Sharon smartly emphasized the humor of “Europeras.” Cage must be taken seriously, but not too seriously. The same could be said for the Fluxus works on deck at the Philharmonic.

Keeping this in mind may be the best way to approach the festival. Consider what it means when a performance by Emanuel Ax is paired with Mr. Young’s “Piano Piece for David Tudor #1,” which instructs the musician to “bring a bale of hay and a bucket of water onstage for the piano to eat and drink.” But don’t be afraid to laugh.

And don’t shy away from rejecting a piece like that, either. Many people walked out of “Europeras”; this is likely to be a common occurrence during the festival.

“It’s O.K. for people to push back and say, ‘That is a step too far for me,’” said Chad Smith, the Philharmonic’s chief operating officer. “We don’t care how people respond to it. We just want people to respond to it.”

Mr. Rountree’s contribution to the festival, “Commitment Booth/Commitment Anthology (for Hope),” engages directly with the question of whether people buy into what Fluxus defines as music — which amounts to more or less anything, with some pieces consisting of nothing more than a thought in your head.

Audiences are asked to enter the booth and make a commitment, with three color-coded options. Green means you hear music in everything, yellow means you’re ambivalent, and gray means you don’t buy into Fluxus as music.

There are four additional performances of “Commitment Booth,” planned through June 1. I hope people visit it more than once. The Fluxus Festival is just warming up, and as people are increasingly exposed to its mind-opening music, who knows? Maybe some of those gray buttons will turn green.

The Fluxus Festival continues through June 1 in Los Angeles; laphil.com/fluxus.