If one vital function of art is to shake things up, look no further than an exhibition last year at the Museum of Art and Design at Miami Dade College in Florida.

It was the first survey in the United States of work by Forensic Architecture, a London-based research group known for using three-dimensional renderings of buildings and streetscapes to investigate potential human rights violations and other incidents.

The group had examined, for example, the fatal shooting of a Palestinian teenager by an Israeli border guard, evidence of the Russian military presence in eastern Ukraine and U.S. drone strikes in Pakistan.

Now, as part of the exhibition, Forensic Architecture planned to use the small museum as a staging area for an investigation of the nearby Homestead Emergency Care Shelter.

The privately run, but federally funded, facility had come under intense criticism from human rights activists and others. It had been used by the U.S. government to hold unaccompanied migrant children and was faulted in reports filed in federal court for its noisy and crowded conditions.

“This exhibition is an occasion to launch a joint investigation with local groups into human rights violations in the Homestead detention center,” Forensic Architecture’s founder, Eyal Weizman, said in a statement read aloud at the exhibition’s opening in February. 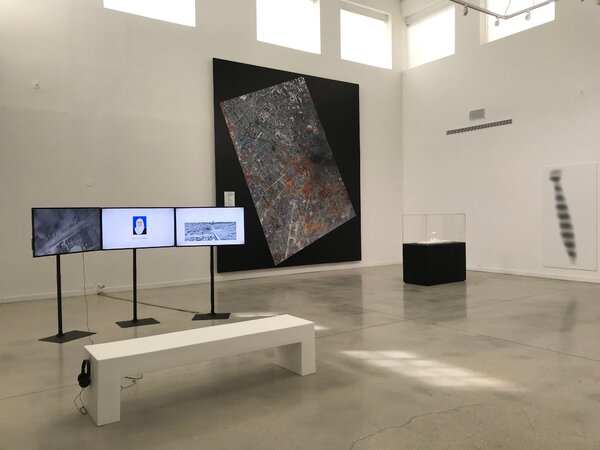 But what became evident is that, even though the museum was a known showcase for risk-taking, socially progressive art, its role as a platform for investigation was far from fully embraced by the college’s leadership.

“We were blindsided last night,” the college’s executive director of cultural affairs wrote to its interim president, “by the unexpected and inaccurate announcement of a partnership with FA to investigate the detention center that was not ran by nor approved by either the museum or the college leadership.”

Documents obtained by The New York Times under a Freedom of Information request indicate that, actually, officials at the college and the museum had been told of plans for the museum to host events in conjunction with the exhibition that would lay the groundwork for such an investigation. Language to that effect was in a news release sent out by the museum months before the opening of the show, called “Forensic Architecture: True to Scale.” And college and museum officials had been provided a copy of Mr. Weizman’s remarks a day before they were delivered.

But officials at the museum and the college, which receives state and federal funding, said in interviews that they became concerned that it appeared they had signed on to sponsor an investigation.

By the time the exhibition closed in March, because of the pandemic, the college had scaled back a plan to host programming that directly focused on the investigation. Forensic Architecture complained strongly but without success. Ultimately, the college told the curator who had coordinated the exhibition, Sophie Landres, that her contract would not be renewed.

“All of a sudden this was like a big snowball,” the museum’s executive director and chief curator, Rina Carvajal, said in an interview. “It was getting so complicated.”

The idea for the show had originated with Ms. Carvajal, who turned it over to Ms. Landres, a curator who had previously taught arts administration at Columbia University’s Teachers College. The museum Ms. Carvajal runs is affiliated with the Miami college, a part of Florida’s state system; the school has grown tremendously in the past 20 years and has an enrollment of 100,000 students, the vast majority of them people of color.

For Forensic Architecture, Miami offered proximity to the facility in Homestead, Fla., about 40 miles away, where the for-profit corporation that ran the center took in more than $1 million a day to house children. Those operations ceased in August 2019.

Mr. Weizman said in an email that he planned to work with academics, researchers, human rights advocates, students and others to interview people who had visited the prison, create a model of the facility, measure sound from a nearby air reserve base and examine whether the children had been exposed to toxins.

Ms. Landres said that Ms. Carvajal approved a proposal in September 2019 that listed the investigation as a central element, something Ms. Carvajal denied during an interview with The Times. Funding for the exhibition was provided by the John S. and James L. Knight Foundation as well as the state of Florida and the local county.

The museum’s grant application to the Knight Foundation, which Ms. Landres said was approved by Ms. Carvajal, mentioned the investigative component, saying the show would include an “embedded study center for learning about Forensic Architecture’s methodologies and using their techniques to investigate the Homestead Child Detention Center.”

In October 2019, Natalia Crujeiras, the college’s executive director of cultural affairs, began asking, as a matter of balance, that the exhibition’s public programming include reviews of how technology had been used to examine human rights issues in Cuba and Venezuela “in addition to the local focus on the Homestead detention center,” according to an email she sent Ms. Landres.

“We need to be mindful that although the College promotes academic and artistic freedom, this exhibit has controversial elements in our current political environment,” Ms. Crujeiras wrote. “While my aim is to respect and support your curatorial vision, I also believe it is in our best interest to find a way to include some exploration of Cuba and Venezuela to generate a balance.”

Months later, she sent an email that noted that including material on the Caribbean and Latin American countries would help “to properly serve and tailor to the interest and demographics of our diverse communities.”

Matters became more complicated in February as the exhibition neared its opening. Mr. Weizman could not obtain a visa to enter the United States to attend. Officials at the U.S. Embassy in London told him that an algorithm had identified an unspecified security threat related to him.

On the night of the opening, his exclusion was reported by The Times and by The Miami Herald, which also reported that Forensic Architecture was scheduled to start an investigation of Homestead “in partnership” with the museum.

Ms. Crujeiras then wrote her “blindsided” email to the college’s interim president, Rolando Montoya. Hours later she wrote Ms. Carvajal, directing her to “correct” language on the museum website that said it would host events “laying the groundwork for an investigation of the alleged crimes occurring within a nearby child migrant detention center.” She said the language, which was removed, was “confusing and basically an inaccurate description of what our intention with the public programs has been.”

In a recent interview, Ms. Crujeiras said she had expected that, as part of the public programming, there would be a discussion of how Forensic Architecture’s techniques could be used to examine events at Homestead, but added: “I don’t believe we ever agreed to do an investigation.”

Now it was Forensic’s turn to object. Mr. Weizman sent a three-page letter to the museum, calling what he described as the reversal of its plans “extremely troubling.” He said Forensic Architecture had agreed to an exhibition at the college “largely because MOAD was committed to producing a robust collaboration with local partners on the Homestead investigation.”

Ms. Carvajal responded that the museum, as part of a public academic institution, “must remain impartial” and had neither “the authority nor the credentials to be a collaborator in any type of investigation.”

Though the museum’s news release discussed hosting events related to a Homestead investigation, college and museum officials said the public programming had yet to be “finalized.” Ms. Landres disputed that contention. She said the college simply grew timid about what it had signed up for after Mr. Weizman could not obtain a visa.

“The notion that I suddenly needed to go through an extra formal approval process for the public programming / Homestead project only came about after Eyal was denied entry to the U.S.,” she said in an email.

In early March, Ms. Carvajal canceled an upcoming exhibition organized by Ms. Landres, citing the need to refocus her duties and “the external pressure on the museum,” a measure that Ms. Landres saw as punitive. Ms. Carvajal said in an interview that the cancellation was not meant to punish Ms. Landres, who she said was supposed to concentrate on creating public programming rather than on curating shows.

When an approved schedule for the Forensic Architecture show’s public programming was handed down on March 9 by college officials, it differed significantly from Ms. Landres’s proposal. None of the six panels or events were dedicated to the sort of examination of Homestead that had been cited on the museum website or in the news release. One was to feature a discussion of the U.S.-Mexico border wall. Others were to review issues that had arisen in Venezuela or Syria. The only place Homestead was mentioned was in an opening statement that said tutorials and panel discussions would consider how Forensic Architecture’s methodology can help illuminate allegations of human rights violations in Cuba, Venezuela, Colombia, Haiti and at the children’s shelter.

Three days later, the exhibition and the museum were closed to the public because of the coronavirus.

Ms. Landres said in an interview that she suggested converting the exhibition into virtual programming but was turned down, an assertion Ms. Carvajal denied. Some of the $120,000 in grant money from the Knight Foundation was then used, with the foundation’s blessing, to create a different online experience, “I Remember Miami,” in which people shared memories of the city.

“We want to create content that is meaningful, that creates unity, that reminds all of us of the beautiful moments in our city,” Ms. Crujeiras said in an online discussion of the arts in Miami. She described the Forensic exhibition to viewers as “sophisticated, beautiful,” but said it had “very complex elements” that made it difficult to present online during a pandemic.

Ms. Landres said that as disagreements over the Forensic exhibition deepened, Ms. Carvajal falsely accused her of acting without authorization and of running over the budget for “True to Scale.” Then in May, Ms. Landres said, Ms. Crujeiras told her that she was being put on paid leave and that her contract, which expired in June 2020, would not be renewed.

College and museum officials said they could not discuss the rationale for not renewing the contract, calling it a personnel matter.

In an email to The Times, Ms. Landres said she thought that the effort to “balance” the Forensic exhibition was designed to placate some of the college’s more conservative trustees. But one trustee, Marcell Felipe, an appointee of Gov. Ron DeSantis, a Republican, said he had not been aware of the show.

“I don’t think it was ever discussed” by the board, he said.

Now back in New York, Ms. Landres said the museum had failed to live up to its ideals and to the commitment it made to the group whose work it was exhibiting.

“They removed any possibility that we would actually arrive closer to the truth about Homestead,” she said. “That’s political censorship and it’s also a form of artistic censorship.”