“Prepare yourself,” my colleague warned me as I was about to travel to Aden, a port city in southern Yemen, to cover the devastating impact of the country’s war on women and girls. “It’s the worst I’ve ever seen.”

In 2015, a coalition of nine countries, led by Saudi Arabia and backed by the United States and Britain, began a bombing campaign against the Houthi rebels, a militia of Iranian-backed Zaydi Shiites from the northern part of Yemen that had seized control of much of the country. The coalition has since reclaimed some of the lost territory, but the Houthis continue to hold the capital, Sana, and the key port city of Hudaydah, which most humanitarian aid flows through, and the fighting has reached a stalemate. The war has officially claimed more than 10,000 lives, although the number is likely much higher, and has pushed 14 million people to the brink of starvation. Women and children make up most of the displaced people now living in makeshift camps and slums on the outskirts of Aden. Most of them are illiterate and are forced to beg or rely on humanitarian aid for survival. The United Nations reports that the war has destroyed government institutions responsible for protecting the most vulnerable members of society from abuse. Of the 22.2 million Yemenis in need of assistance, more than three million women and girls are at risk of domestic violence, sexual assault and rape.

The territory formerly known as North Yemen, which includes the capital, has always been repressive, according to women’s rights activists on the ground, while the region that was once South Yemen, a sovereign country between 1967 and 1990, was a bastion of women’s rights in the Arabian Peninsula. The years following South Yemen’s independence from British rule in 1967 were a golden age for women, who were educated, employed and empowered alongside men. Legislation adopted in 1974 codified a progressive women’s rights agenda that allowed women to petition for divorce on the same grounds as men, required a woman’s consent before a wedding could take place and set the minimum age of marriage for girls at 16.

Things began to change in 1990, when North and South Yemen unified into one country, and the balance of power tipped to favor northern politics, culture and customs. That same year, Saudi Arabia, Yemen’s northern neighbor, suspended residency privileges for Yemeni workers in retribution for the country’s support of Iraq, which had invaded Kuwait and was fighting Saudi Arabia and a coalition of support forces in the Persian Gulf war. The Saudis were intent on spreading Wahhabism, a puritanical branch of Sunni Islam that drastically limits women’s rights and role in society, across the region, and hundreds of thousands of Yemeni men returned from Saudi Arabia, bringing with them this ideology, learned in Saudi mosques and madrasas. 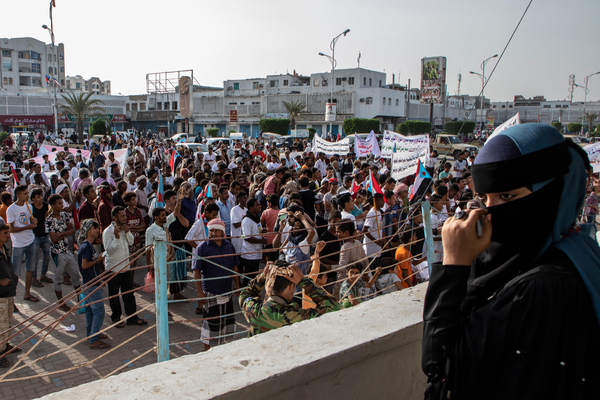 Nisma Mansoor, a 24-year-old engineering student and activist from Aden, remembers a time when there were no concrete walls, and children could run freely in the quiet streets. “This ‘hide your women’ thing happened only after unification,” she said. “Now you can barely see a woman that is not covering her face. Everyone is more conservative, asking, ‘Why are you going out? Why are you working? Why do you have male friends?’ Even the girls themselves have started to adopt this mentality.” Mansoor is working with the Peace Track Initiative, an organization of women’s activists, to petition the international community to include women in peace talks between the Houthis and Yemen’s internationally recognized government when they eventually take place. (On Monday, Yemen’s government agreed to participate in United Nations-sponsored peace negotiations in Sweden after the Houthis agreed to halt rocket and missile attacks against Saudi Arabia and its allies.) She believes that Yemen will never achieve stability or security if women are not included. As an engineer, Mansoor also wants the reconstruction of Yemen to include gender-sensitive projects, like building wells closer to remote villages so women do not have to walk as far and risk their safety to collect water and complete their daily tasks.

The Southern Transitional Council, a United Arab Emirates-backed organization of provincial leaders advocating the south’s secession, had scheduled a rally for Oct. 14 to commemorate the start of a revolt in 1963 against British colonial rule in South Yemen. The council canceled it last minute, saying they wanted to put the funds toward humanitarian projects instead. The growing secessionist movement fueled factional clashes among the Saudi-backed coalition earlier this year and has complicated the prospects of a peaceful resolution in Yemen. While the international committee has acknowledged the council’s demands, they are not a part of the upcoming peace talks in Sweden, according to United Nations officials.

[Sign up for the weekly At War newsletter to receive stories about duty, conflict and consequence.]

Despite the event’s being called off, hundreds turned out in the square. The atmosphere was celebratory but tense. Marching bands wove through crowds of men chewing mouthfuls of qat, a plant that induces a mild high. Pickup trucks with machine guns mounted on the back slowly drove down the street as young, armed men jumped on and off with excitement. On the main stage, political leaders, both men and women, were giving impassioned speeches to a steadily growing crowd. The women’s section made up half the stage. Female activists, wearing niqabs and abayas, draped their black-clad bodies with banners boldly displaying the flag of the southern separatist movement. They carried pink purses with messages of female empowerment written on the front, passionately chanting at the crowd. “They could have us burned alive or burn our children right before our eyes,” one activist said the day before. “We are willing to die here. We’re demanding some human rights here.”

After about 30 minutes, a scuffle broke out between two people in the crowd, causing people gathered below the stage to panic. Hundreds of people dispersed within seconds, leaving the square almost empty. The activists moved to a quiet street behind the stage, all while shaking their heads and chuckling. One of them had her young son with her. He, too, was smiling. “Don’t worry, everything is O.K.,” the mother told me. “You’re safe.”

When asked if it was prudent to bring a child to a rally with so many armed men, she said she wanted her children to understand the sacrifices made for freedom and equality, so they would never take these liberties for granted. These women remembered walking along the southern city’s packed beaches, heads uncovered, eating ice cream cones during a time when they could live freely without reprisal from roving gangs of armed, young, radicalized men who now patrol Aden’s streets on motorbikes.

It was getting dark, and we could hear cheers from the crowd reconvening in the square and patriotic trumpeting from the band floating through the air. The women adjusted their niqabs, climbed the stairs one by one and then walked back out onto the stage.

Neha Wadekar is a multimedia journalist based in Nairobi, Kenya. Her reporting focuses on conflict, foreign affairs and gender. She recently traveled to Yemen with support from The GroundTruth Project, where she is a GroundTruth Films fellow.