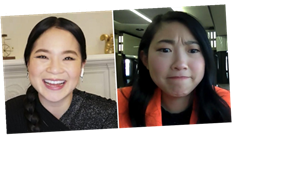 Raya and the Last Dragon is the latest Disney film to captivate audiences with its beautiful storytelling and characters. The movie, which premiered on March 5, follows Disney’s first Southeast Asian princess, Raya, as she sets on incredible adventure to find a dragon in order to restore peace to her land. In honor of the heartfelt film, POPSUGAR sat down with stars Kelly Marie Tran and Awkwafina for a little game of Disney princess movie trivia.

In addition to finishing lyrics from popular Disney tunes like “How Far I’ll Go” from Moana . . .

. . . they also shared tidbits about filming Raya and the Last Dragon, including their favorite part about being a part of the cast.

See how well they did on trivia above, and be sure to watch the film in theaters and on Disney+ with Premier Access.