Ariana Grande didn’t attend the Grammys, but that didn’t stop her from being at the center of the conversation about — and around — the ceremony.

On Friday she released an album, “Thank U, Next,” and a hot-button video for a new single, “Break Up With Your Girlfriend, I’m Bored.” And throughout Sunday, she found several ways — some earnest, some petty — to stay at the forefront of online discussion. When she won best pop vocal album, for “Sweetener,” she wrote on Twitter, “I try not to put too much weight into these things,” conceding, “this is wild and beautiful.” She appeared in a psychedelically disorienting commercial for Apple’s Memoji, with an animated Grande head performing “7 Rings.”

When Cardi B won best rap album, Grande fired off a couple of frustrated tweets; her ex-boyfriend, Mac Miller, who died last year, was a nominee. (She later apologized and deleted all of the tweets.) And she posted several photos of herself in the custom Zac Posen dress she was going to wear during the ceremony.

[Who soared and who flopped? See the best and worst of the Grammys.]

This wasn’t the Grammy experience Grande was planning to have. Up until a couple of days ago, she was slated to perform on the broadcast, a plan that imploded in spectacular fashion.

After the longtime show producer Ken Ehrlich said in an interview that Grande was no longer performing because she “felt it was too late for her to pull something together,” Grande replied with barbs.

“I’ve kept my mouth shut but now you’re lying about me,” Grande wrote on Twitter. “I can pull together a performance over night and you know that, Ken. It was when my creativity & self-expression was stifled by you, that I decided not to attend.”

And so on the night of the Grammys, all of the noise Grande generated was heard everywhere but the actual broadcast, making her one of several artists who made loud splashes without ever setting foot in the Staples Center.

This year’s ceremony was perhaps as notable for who didn’t show up — Kendrick Lamar, Childish Gambino (who won four awards, including record and song of the year for “This Is America”), Taylor Swift — as who did. And also for how it treated several of its biggest winners, including Drake, cutting off their speeches abruptly. (This, on a broadcast on which only nine awards were handed out over more than three and a half hours.) 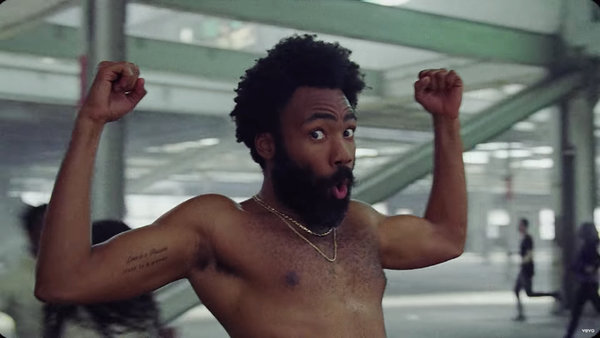 So perhaps the best place to communicate an unfettered message during the Grammys is anywhere but the actual ceremony. The show still conceives of itself as a linear television experience, when in fact the consumption of it — and especially the stars it relies upon — is wild, woolly and omnidirectional.

Consider 21 Savage, nominated for two awards for his role on Post Malone’s “Rockstar” but unable to attend because of his detention by Immigration and Customs Enforcement last week. When Post Malone performed, he didn’t mention his collaborator, which spurred a fierce backlash online. (Eventually, a photo of him wearing a 21 Savage T-shirt underneath his outfit was circulated.) Kei Henderson, one of 21 Savage’s managers, wrote on Twitter that she and others “attempted to solidify recognition for Savage during the performance of ‘Rockstar,’ it just didn’t work out that way.” The only person to mention 21 Savage during the broadcast was Ludwig Göransson, the Childish Gambino collaborator. The lack of other acknowledgment was glaring.

Some stars used the Grammys window to advertise their other endeavors. Childish Gambino appeared in a vivid ad for Google’s Playmoji in which he danced alongside an avatar of himself. Travis Scott had one of the most energetic performances of the show, but also released a new sneaker during the ceremony. Taylor Swift, who was nominated once this year, posted a photo on Instagram from the Baftas, in London. (Last year, the video for “The Middle” — the Zedd, Maren Morris and Grey collaboration — debuted during the Grammys as part of a Target advertising campaign; this year, it was nominated for record and song of the year. The side road works.)

While plenty of stars sought a way around the Grammy telecast pipeline, others used it to its fullest potential. Cardi B, who often appears to be the only performer in any field who still experiences genuine shock and gratitude, delivered an emotional speech after winning best rap album. Brandi Carlile’s performance of “The Joke” was outlandishly good, and Alicia Keys’s hosting had several slyly intriguing moments. Following a brutally boring Grammys last year that also deeply marginalized women, it was refreshing that most of this year’s high points came from female artists.

More often, though, when the Grammys had an opportunity to celebrate one of pop’s most prominent stars, it dropped the ball. Speeches from almost all the most relevant winners — Kacey Musgraves, Cardi B, Dua Lipa — were cut short.

In no case was this more egregious than with Drake, by far the most popular artist to win a Grammy this year. Drake was offered a performance slot, but turned it down (as did Lamar and Childish Gambino). So when he popped up onstage after he was announced as the winner of best rap song, it was a true surprise.

While his appearance was magnanimous — especially after his prior critiques of the Grammys — his speech was anything but. He took a swipe at his prior best rap song Grammy win for “Hotline Bling,” which is not (really) a rap song. He drew attention to the fact that those who vote for the Grammys might not be the best equipped to “understand, you know, what a mixed-race kid from Canada has to say, or a fly Spanish girl from New York, or anybody else, or a brother from Houston,” acknowledging Cardi B and Travis Scott.

And then, the real humdinger. “Look, if there’s people who have regular jobs who are coming out in the rain, in the snow, spending their hard-earned money to buy tickets to come to your shows, you don’t need this right here, I promise you. You already won.”

The Grammys, however, did not continue with him. The camera pulled back to a wide shot, and then the show quickly cut to commercial. (A representative for the show later said that producers mistook Drake’s pause for the end of his remarks.)

The Grammys made room for plenty of time-absorbers: Alicia Keys karaoke; umpteen tributes; a long montage dedicated to the Recording Academy’s beleaguered outgoing leader, Neil Portnow. But it is the show’s stubborn curse that it’s willing to cut off the most popular and meaningful artist in pop at the knees in order to preserve its sense of self-importance — a preposterous and careless choice. It is that same hubris that allows Ariana Grande to watch the Grammys from the couch rather than be on the stage, and that ensures the Grammys will continue to be a site of protest, of dissent, and dullness for years to come, pending changes in leadership and attitude.

After the ceremony, Drake posted a photo of the victory envelope bearing his name, and added the caption “Too raw for TV.” Now more than ever, that’s a fine way to be.