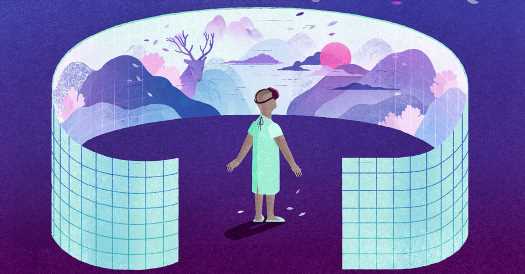 I was packing up at the end of a family vacation in Florida when my back went into an excruciating spasm unrelieved by a fistful of pain medication. As my twin sons, then 8 years old, wheeled me through the airport, one of them suggested, “Mom, if you think about something else, it won’t hurt so much.”

At the time, I failed to appreciate the wisdom of his advice. Now, four decades later, a sophisticated distraction technique is being used to help patients of all ages cope with pain, both acute and chronic. The method, called Virtual Reality Therapy, goes beyond simple distraction, as might result from watching television. Rather, it totally immerses the patient in an entertaining, relaxing, interactive environment that so occupies the brain, it has no room to process pain sensations at the same time.

“It’s not just a distraction — it’s like an endogenous narcotic providing a physiological and chemical burst that causes you to feel good,” said Jeffrey I. Gold, director of the pediatric pain management clinic at Children’s Hospital Los Angeles. “It’s different from reading a book or playing with a toy. It’s a multisensory experience that engages a person’s attention on a much deeper level.”

Virtual Reality Therapy is the new kid on the block for pain management, now gradually growing in use as the opioid epidemic continues to soar and the price of the needed equipment has plummeted. VR, as it is called, has been most widely and successfully used so far to help children and adults weather acute pain, as can accompany an IV insertion or debridement of burns. But it can also enhance the effectiveness of established techniques like physical therapy, hypnosis and cognitive behavioral therapy to treat debilitating chronic pain.

Hollie Davis, a 41-year-old resident of High Point, N.C., owes her current full mobility and cheerful disposition to a therapist at BreakThrough Physical Therapy in Greensboro, N.C., part of a network of outpatient physical therapy clinics run by Confluent Health. The therapist suggested she try VR as part of her treatment for persistent, life-inhibiting pain following a motorcycle accident. Months after suffering a concussion and extremely painful bruising when a car struck her motorcycle, “the prediction that I’d get better with time just wasn’t happening,” she told me.

“I found VR fascinating. I spent 10 or 20 minutes in a dark room while a head-mounted 3-D screen transported me to a very relaxing place, taught me about the nature of pain, how oxygen travels through the body, then how to breathe, focus on my breathing, relax my body and think of nothing else.” The device engages multiple senses, essentially flooding the brain with so much input that it cannot register pain signals. When pain messages try to get through, “the brain gives a busy signal,” Hunter Hoffman, director of the VR research center at the University of Washington in Seattle, said.

As a tool for overcoming pain and fear of an injection or IV insertion, for example, children may strive to earn points by launching Nerf balls at teddy bears on one VR program, Dr. Gold said. “Kids may say ‘When are you going to do it?’ and we’ve done it five minutes ago.”

One of the first VR programs, called SnowWorld, was designed by Dr. Hoffman for treating burn patients, who often say “getting their wounds cleaned is like being burned again,” he said. The virtual snowy environment is a stark contrast with the cause of their burns.

Of course, if the treatment of persistent pain only involved virtual reality, once the headset and its computerized program are removed, the pain can and would return. Larry Benz, a physical therapist and chief executive of Confluent Health, explained, “VR is not a cure — it’s an adjunct to other methods that we know work” but that often involve many months of costly treatment and still may not achieve a desired result.

Too often, patients with chronic pain become afraid to move, which can actually make their problem worse. Various VR programs get patients to gently exercise their injured body parts and extend their range of motion while blocking their brain’s ability to register pain.

“Using VR as an adjunct, we can teach coping skills, techniques patients can use on their own that will help diminish chronic pain,” Dr. Hoffman said. “Learning changes the brain and gives patients something that continues to work when they take the helmet off. When patients realize their pain isn’t inevitable, they’re more receptive to doing physical therapy exercises and more likely to move on their own.”

David R. Patterson, a University of Washington researcher who pioneered the combined use of VR and hypnosis, said the techniques can foster mindfulness, “enhancing patients’ ability to come into the moment rather than pay attention to their pain. Mindfulness can train the brain not to react to thoughts or emotions associated with suffering. Pain may be inevitable, but suffering isn’t.”

Dr. Gold explained, “Mindfulness teaches the mind how to quiet the body and nervous system through breathing and focusing on one’s breath. Thoughts may come into your head but then go out. You don’t obsess about them or catastrophize.”

Still, Dr. Patterson and others said, VR is not yet ready for prime time to treat chronic pain, nor should it be considered a replacement for medication.

“Pilot studies are underway using different kinds of VR content to help patients learn skills for managing their pain and be less quick to grab medication,” Dr. Gold said. With VR headsets now priced around $300 or $400, patients may be able to use them at home several times a day. A number of companies are developing various software programs that create therapeutic virtual environments, with the ultimate goal of using the mind to change the brain — “like learning to play the piano or ride a bike,” he said.

“VR is not a panacea or silver bullet, but a tool to teach many different things,” Dr. Gold said. “Unlike opioids, you don’t become dependent on VR. Rather, you learn skills that can generalize into life without VR. It’s a tool for breaking the cycle of pain and stress that drives the nervous system through the roof. You can learn to think yourself well instead of thinking yourself sick.”

Jane Brody is the Personal Health columnist, a position she has held since 1976. She has written more than a dozen books including the best sellers “Jane Brody’s Nutrition Book” and “Jane Brody’s Good Food Book.”