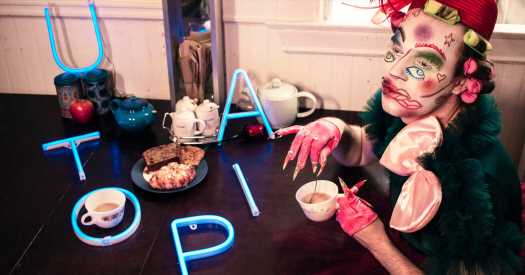 Quick etymology lesson: The word utopia comes from the Greek. It means “no place.” So maybe it makes sense that Charles L. Mee’s new play “Utopia,” produced by San Francisco’s Cutting Ball Theater and streaming through Nov. 15, feels so untethered. A whimsical ensemble drama, a dance performance and an online gallery show, it is so dissevered from the terrestrial that it melts into pixelated air.

“Utopia,” directed by Ariel Craft, begins with a girl (Chloe Fong) and her mother (Michelle Talgarow), framed in separate screens, about to enjoy breakfast.

“What are we doing here?” the girl asks.

“Making a life,” her mother answers.

Later, reading up on the show, I would learn that this sequence, like every sequence in the play, took place in a cafe. I didn’t guess this because the backgrounds, decorated with art from Creativity Explored, an organization that supports people with developmental disabilities, are so obviously domestic. I also didn’t recognize the three other twosomes as fellow patrons. I suppose Don Wood’s waiter should have tipped me off. Instead I wondered how he had made his way into people’s homes.

In duets and the occasional monologue, the characters discuss love, Mee’s typical preoccupation. Occasionally the screen shifts to movement sequences — shot at a park, a beach, an overlook — choreographed by Katie Wong of RAWdance. Mee has had a long relationship with dance, dating back to his early work with the director Martha Clarke and stretching forward to a current collaboration with Anne Bogart and Elizabeth Streb. But here the dance — angular, eventful — rarely seems in dialogue with the cafe conversations.

In terms of form, Mee, a historian by training, favors a composite approach. His collagelike works borrow liberally from books, newspaper articles, internet chitchat. This obsessive quotation can seem indulgent. But his decoupage style mirrors the way so many of us absorb information now — online, with multiple tabs open, trying to make some sense out of all the confusion.

“Utopia” seems somewhat less dependent on secondary sources. But Mee’s own words don’t lend the show much substance. A meditation on “eudaemonia,” or “the good life,” it belongs, frothily, to Mee’s cycle of Heaven on Earth plays. The actors enjoy themselves — dancing with a lamp, adopting a British accent, slinking through a door frame in a femme fatale get-up — but that pleasure doesn’t always extend past the screen. This is a softened ice cream sundae of a play, with accumulated sweets puddling onto the plate.

The dialogue, a bouquet of near non-sequiturs, tends toward the precious:

“I won’t say how many shoes I’ve got, but I have no regrets about any of them.”

“Sometimes I think I would like to take you in my arms and we would lie down on the back of a chicken and fly up into the clouds.”

Craft’s direction, too, has an air of calculated eccentricity, like a musical sequence in which one performer plays an accordion and another an egg beater, while a third toys with a child’s ball. The show concludes with a 20-minute dance sequence.

“Utopia” can be enjoyed as respite, a candy-coated breather from the horrors just outside our window — or rather indoors, in aerosol droplets. But this play, commissioned and written before the pandemic and the recent Black Lives Matter protests, dances out of step with the moment. Mee’s vision of a perfect future elides difference entirely. The pairs provide a bright assortment of races, ages, genders, sexual orientations and body types. None of that influences the action or enters the chitchat.

Maybe that’s utopian for some. The current conversation, however, isn’t about negating difference, but about acknowledging that all lives haven’t mattered in the same way. Should an imagined heaven on Earth — or even just heaven on Vimeo — erase that?