We asked, and you answered: What one theater production would you have put on your best of 2018 list that our chief theater critics, Ben Brantley and Jesse Green, left off theirs? You pointed us to Broadway and some tiny theaters beyond. You celebrated productions in cities far from New York. And from the sample you offered it seems like the Public Theater, in the East Village, had some especially satisfied customers. Here’s an edited sampling of your responses. SCOTT HELLER

I was fortunate enough to see my all-time favorite play, Tom Stoppard’s “Travesties,” in a magnificent revival by Roundabout Theater Company. (I live in the San Francisco Bay Area and traveled to N.Y. to see it, and it was utterly worth it.) Tom Hollander was brilliant in the lead role of Henry Carr. SUE TROWBRIDGE

“The Lifespan of a Fact” was the best written and acted play I had seen in ages; the ensemble of Cherry Jones, Bobby Cannavale and Daniel Radcliffe was simply a gift from the acting gods. DENNIS NOLLETTE

With revivals and jukebox musicals filling Broadway, “The Prom” was a welcome original production, with a rare combination of clever dialogue, excellent dancing and a serious message. DAVID MACHLOWITZ

“The Boys in The Band” CLINT and ANNE RICKARDS 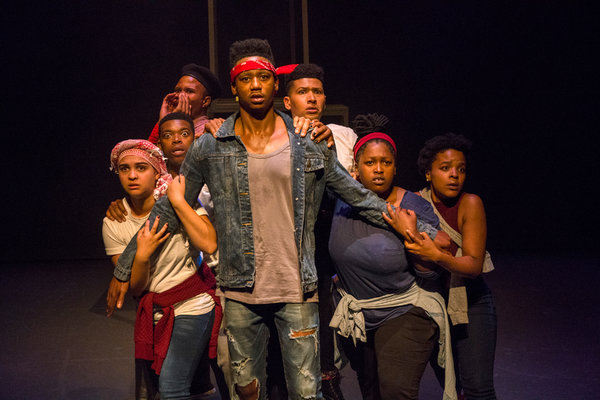 “The Resistible Rise of Arturo Ui” really made an impression on me — incredibly relevant to our current times (couldn’t believe how some of the dialogue written in the ‘40s is exactly what Trump says now) and the standout performances, especially Raúl Esparza. ALMA YEE

“The Fall,” written and performed by South African students about the 2015 student movement to have the statue of Cecil Rhodes removed from the University of Cape Town campus. BRUCE ALTSCHULER

“A Pink Chair (In Place of a Fake Antique)” by the Wooster Group. HUNTER GAUSE

Vonnegut’s “Mother Night.” Powerfully acted in a small theater with a difficult philosophical question at its heart: Does a double agent ultimately bear responsibility for the harm caused by his duplicitous actions? ALAN J. KLUGER

“Thom Pain (based on nothing)” at Signature Theater. Just a roller coaster of amazingly different feelings and insights. Masterful. LESLIE BHUTANI

My wife and I would include Manhattan Theater Club’s “The Niceties.” Brilliantly written counterarguments compellingly expressed by the actors. DONALD BRANT JR.

Praise for the Public

“Girl From The North Country.” This entirely fresh innovative and powerful presentation of a new musical form, coupled with Conor McPherson’s superb storytelling and the poetic musical genius of Bob Dylan, made our yearly trip to New York most memorable. KNUT KNUTSON

Both top 10 lists are terrific — who am I to question them? But the best thing I’ve seen in a long while is “Girl from North Country.” JOHN REEVES

“Cyrano” at Goodspeed Musicals. I went in for Peter Dinklage and came out shocked to find such an artistically adept retelling of the classic. BLAIR RUSSELL

David Ives’s “The Metromaniacs” because attention must be paid to the occasional farce which is both smart and brilliantly realized. It’s really hard to get a soufflé to come out just right. HOWARD LEVITSKY

I saw many plays in New York, London and the D.C. area where I live. But the best — for enterprise, relevance, and acting — was “Labour of Love.” The small Olney Theater in Olney, Maryland, was the only American theater company to import James Graham’s political comedy. It is about the Labour Party from 1990 to 2017, with many parallels to American politics. ELAINE SHOWALTER

“The Comedy of Errors” at the Shakespeare Theater Company in Washington. Fabulous set and costuming. Good voices for the clever music and lyrics that added an enormous amount to the dialogue and action. DIBBY JOHNSON

My hands-down nominee for the year’s best outside New York is the Wallace Buice Theater Company’s production of “Parade,” performed at the Lyric Studio Theater in Marietta, Ga., just a mile from where the victim, Mary Phagan, is buried and just two miles from where Leo Frank was lynched by an angry anti-Semitic mob. WENDELL W. BARNES JR.

“Soft Power,” which I saw at the Curran in San Francisco, was completely original and boundary-breaking. I can’t wait for New York to see it. DAN CASPER