Neon hues of orange and pink glistened off the wet sidewalks and the fulsome chrome grills of a Buick Super and Ford Customline. Outside a diner, under bluish curls of cigarette smoke, a crowd milled around in the darkness. Men well under the age of 70 unironically wore pants hitched high above their waists. And women accessorized their outfits with pillbox hats and pearls, illuminated by the glow of a storefront window rather than a smartphone.

Experiencing these predawn tableaux late last summer, it was as if one city block’s worth of mid-20th-century Americana had seeped from a well-preserved Kodachrome photo onto the streets of the West Village. But these street scenes were actually the stunning handiwork of the creators and the behind-the-scenes magicians of “The Marvelous Mrs. Maisel,” about an Upper West Side housewife (Rachel Brosnahan) who aspires to be a comedian in the New York of the late 1950s. (The show returned for a second season on Amazon on Wednesday.)

While period pieces are nothing new, the attention to detail on “Mrs. Maisel” transcends the usual nostalgic kitsch. As much consideration is paid to the paper coffee cups, pretzel tins and No. 2 pencils as to the dresses, suits and hats. Hoping to capture not just the look but the feel of the era, I photographed over several days and one long night the meticulous transformation of an old Williamsburg bank into the B. Altman department store, a Midtown Manhattan television studio into a telethon set circa 1959, and, for a flashback scene, a West Village luncheonette into a period diner. And to learn how “Mrs. Maisel” pulls off these dramatic changes, and what it’s like to be enveloped in this throwback world, Alexis Soloski spoke to the key members of the production team and an assortment of extras. — TODD HEISLER 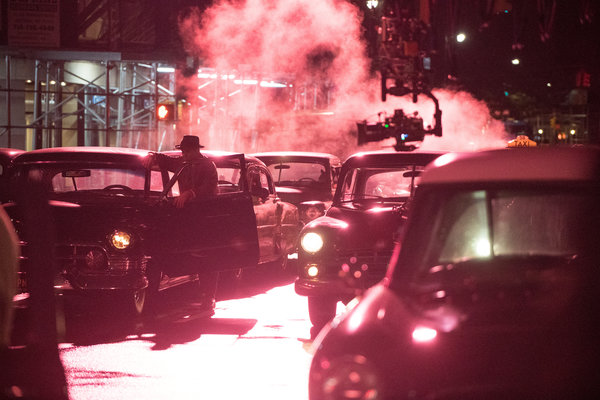 “I love that era. I was born in 1947, so I kind of relate to it. You hold your head up with a hat on and you smile differently, and you carry your handbag differently. You feel good.” — Carmen Cooper, an extra (below)

One of the charms of “Mrs. Maisel” is the way it whooshes viewers back to a dream of 1950s New York — a city of flair and sass. The colors sing; the interiors gleam. But the fantasy is deeply rooted in realism.

“We make sure all the details are just right,” said Bill Groom, the show’s production designer. “The color palette’s very important, the types of fabric, the technology of the period. We look through electrical catalogs and plumbing catalogs. When we go into a modern location, we change light switches and all sorts of things to make it real. We don’t want anything to pull the viewers out of the story.”

“Background work is a chance to meet people from a whole array of careers. It’s fun! And then you get that extra boost when family and friends say, I saw you on TV, even though it’s four or five seconds and you were blurred.” — Kevin Barksdale, extra (above, far right)

The energy and vitality of “Mrs. Maisel” depends on some active and surprisingly inventive camera work. The penultimate episode of the new season includes scenes set at a telethon. David Mullen, the show’s director of photography, couldn’t find working cameras of the period so he had dummy bodies built and inserted small black-and-white surveillance cameras underneath them.

“I will say, that’s the largest hat I’ve ever worn, it was so grand. There was a real sense of femininity and luxury.” — Courtney Leigh Halford, featured extra (above, right)

“When the assistant put me in the bra and the slip and I looked in the mirror at the very different body silhouette, she said to me, ‘Welcome to the ’50s.’’’ — Kilburg Reedy, extra (below, far left)

Donna Zakowska’s title is costume designer, but she’s responsible for much more. Every accessory and ornament — the hats, the gloves, the shoes, the stockings, the handbags, the jewelry, the ties, the handkerchiefs, the cuff links — fall under her purview.

“In terms of the men’s clothing, I used a lot of photos of Cary Grant,” she said. “That look is very classic to America — there’s a simplicity, a directness, a square, more boxy cut, very elegant. In 2018, some men don’t even know how to tie a tie, forget a bow tie. You also have to tell them, ‘Please, can you pull up your pants.’ For women, there is much more of an emphasis on clean lines and shape and the contrast between the waist and the hips.”

“We never want to go over the top with accessories, they just have to all work together. Every morning, before Rachel goes on set, we usually have the clothes in place and I have a tray filled with certain jewelry choices. We like to spend a few minutes playing. It’s the last thing, the cherry on the cake.”

When actors come in off the street, they’re scrubbed clean, then made up in a late-’50s style, under the direction of Patricia Reagan, the head of the makeup department.

“I have to be honest with you, I don’t wear any makeup — not ever,” she confided. “But for the show, I have one red lipstick that I absolutely love. It’s YSL 201. It’s the red that Rachel wears when she performs in the black dress. It’s a really rich, flawless, beautiful red. I have tried so many red lipsticks in the past couple of years. I would find beautiful colors, but they wouldn’t stay on, they wouldn’t read, but this lipstick is the perfect lipstick.”

Meanwhile, conjuring 1959 Manhattan on the 2018 New York grid is the job of the locations manager Amanda Foley. To recreate B. Altman & Company, the luxury department store where Midge works, Ms. Foley turned to a former bank building that now houses the Williamsburg Art & Historical Center.

“A lovely couple who are very into the arts, they rented it to us for two years,” Foley said. “The bones are there and we were able to have it for the whole first two seasons so we could spend a lot of time in there making it exactly what we needed it to be, this whole beautiful B. Altman department store. The exterior we shot at the original B. Altman department store on 34th Street. It’s now a CUNY library.”

When a diner was called for, Foley located the West Village spot La Bonbonniere. The production rechristened it The City Spoon. The interior was the simple part — once some photos were removed, it could pass for the era. The hard part? The street outside. 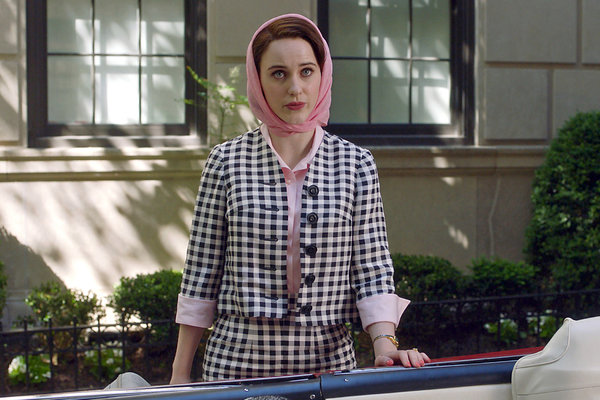 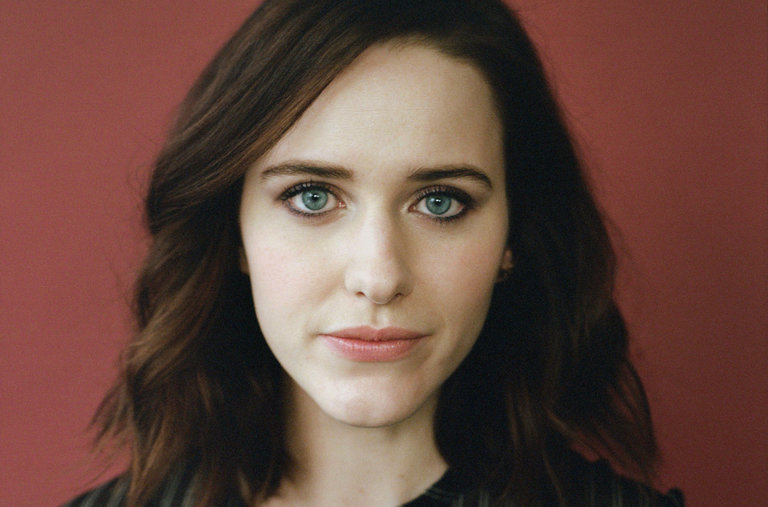