LIVERPOOL, England — On a recent Saturday, the Breunion Boys — a Dutch boy band set up in response to Britain’s planned departure from the European Union — stood in a dressing room in the basement of Liverpool University doing final warm-ups for their first show in Britain.

The five members stared into one another’s eyes and kicked their legs in time to orders from Flavia Faas, the band’s songwriter and dance coach. They tried not to laugh as the exercises got quicker and quicker, so much so it was silly.

“This is what we came here for!” Faas shouted as the group finished. 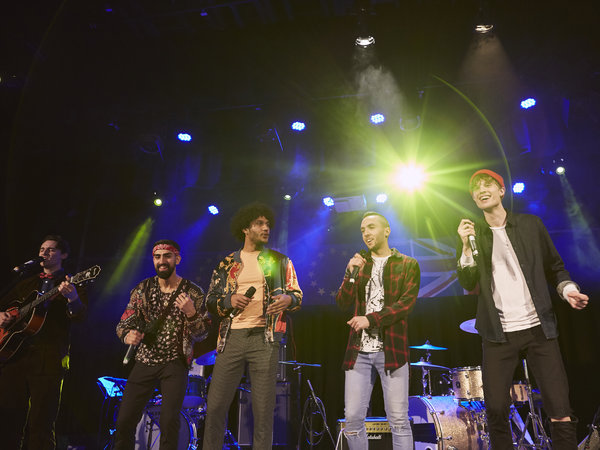 A few moments later, they took the stage at the “Rock for Europe” event. The audience in the student union hall was only about 60 people, and decades older than the crowd at a typical boy band gig. Most stood or sat at the back, looking tired after listening to hours of pro-European Union speeches.

“We don’t bite,” said Joshua Alagbe, 24, one of the band’s members, encouraging people forward. “We just want to show the real love between Britain and Europe.”

In the audience, David Murtagh, 69, a part-time roadside assistance coordinator, made a face to show it wasn’t his kind of music. “But I do like their shirts,” he said later.

The Breunion Boys may sound like a stunt, but the group has grabbed more attention than most activists in the bitter debate around Brexit, as Britain’s departure from the European Union is known, including in British media outlets that support the withdrawal. Since posting the clip for their debut song, “Britain Come Back,” online in December, they have appeared on daytime television and in tabloid newspapers.

The video for the song has also appeared on several comedy TV shows, especially a part when Seyed Hosseini, 22, raps “look at what you leave behind” while showing his abs. (John Oliver showed it on HBO’s “Last Week Tonight” then called the band “a pretty solid argument for leaving the E.U. on any terms necessary.”)

The Liverpool show was billed as the first of a British tour, although the only other stop scheduled so far is in London on March 29, the date Britain is scheduled to leave the bloc.

The woman behind the group, Julia Veldman, 30, an animator from the Netherlands, said in an interview that she genuinely believed the Breunion Boys could have an impact. “I’m very sincere,” she said. “People have tried a lot of facts and arguments and they haven’t moved the debate one inch. So we can but try with emotion.”

“We know this is funny,” she added. “But that’s the strength of it. There’s no light or air anywhere in the Brexit debate. Now people talk about us, and then we can say how we feel. We’re a bit like a Trojan horse.”

Veldman was living in New York when she heard the result of the 2016’s Brexit referendum. “That was literally the first time I realized there were people who didn’t like the European Union, which is stupid of course,” she said.

She started crying when she heard the news, she said, adding, “We’ve had peace and opportunity in Europe for so long, and I don’t want to lose that.”

The idea of using a boy band to deliver her message came quickly, Veldman said. There is nothing more British than a boy band, she added, mentioning groups like Take That and One Direction.

“Being vulnerable and asking someone to reconsider can be pathetic,” she said. “But when it’s young boys who can dance and sing and are hot, it’s different.”

Finding guys who could do that as well as discuss the intricacies of Brexit was difficult, Veldman added. Her search lasted a year. “There’s many people with political views,” she said. “They don’t all have sex appeal.”

Before the show in Liverpool, the group talked about sometimes feeling like a real boy band. They have several hard-core fans, they said, including a group of schoolgirls that regularly sends them drawings. But they also get the online abuse — including death threats and accusations they are funded by Russia or George Soros, the financier who is often villainized by many on the far right. (“I wish,” Veldman said, laughing.)

But all the members insisted they are doing this because they care about Brexit. Pablo Ramos, 25, the band’s best dancer and a hotel receptionist in Amsterdam, said he had been able to move to the Netherlands from Spain only because European Union citizens have the right to live and work in any member country. “Why make a limit, a border between us?” he said.

The Breunion Boys have only two original songs. (The second, “The Real Deal,” features lyrics like, “Oh, the treaties we have together / No one’s going to treat you better.”) But more songs will emerge as Brexit unfolds, Veldman said. She wants the band to sing about the potential return of a hard border between Ireland and Northern Ireland, but is concerned about getting the right tone.

At the Liverpool show, it was clear that even if the Breunion Boys cannot change the course of Brexit, their efforts were entertaining people. Within two songs, more than half the audience had moved near the stage. Most were swaying — and laughing — along.

Between numbers, the band asked the audience how they felt about Brexit. A student, who said he was originally from Germany, looked as if he were about to cry when he said he feared having to leave Britain. The boys jumped down from the stage and hugged him; the audience sighed.

But the biggest cheer came a few minutes later, as the group finished “Britain Come Back.”

It came just after Hosseini lifted his top and pointed to his abs.