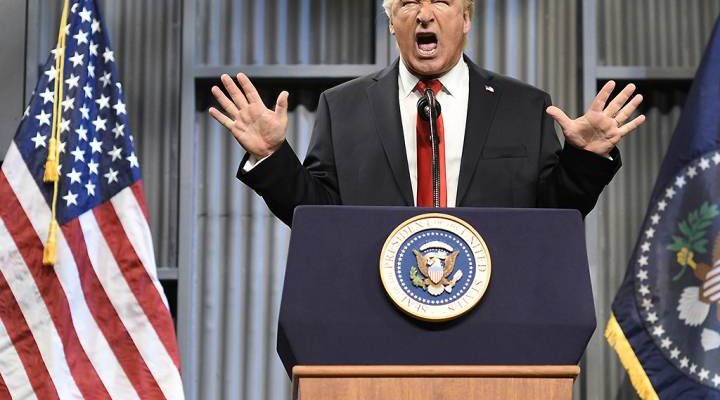 The Daily Show, Full Frontal with Samantha Bee and Last Week Tonight with John Oliver are a few of the many political satire shows providing a platform to poke fun of people in power, which experts say is “fundamental” to a healthy democracy.

And satire has been around for centuries, from Jonathan Swift’s Gulliver’s Travels, to George Orwell’s Animal Farm and more recently, Saturday Night Live’s Weekend Update.

Many of the recent satire shows, like SNL, have one thing in common: mocking U.S. President Donald Trump and his administration. Trump has so frequently been a target of SNL that the president even suggested the show’s satirical take on his administration might not be legal, calling it “one-sided.”

According to Sophia McClennen, professor of international affairs and comparative literature at Penn State, these types of shows have always poked fun at presidents, but she said there has been a spike of satire over the past years, and the Trump administration may be the reason.

And she added that a rise in satire is usually a sign of political turbulence.

“We see satire emerge when political discourse is in crisis and when it becomes important to use satirical comedy to put political pressure on misinformation, folly and the abuse of power,” she said.

However, she added that with the rise of social media, this is also creating “citizen satirists” who can take to Twitter and voice their displeasure at the powers that be, adding to the satire boom.

“Social media allows anonymous people to speak back to people in power. Just look at Trump’s Twitter account comments. Many are sassy,” she said.

But of course, political satire is not just tied to the U.S.

Satire is a natural human response to an abuse of power, McClennen said, and it exists in many other nations rocked with political instability, like Syria, Iran and Egypt.

For example, in 2011 during the Egyptian Arab Spring protests, a popular television satirist known as Egypt’s Jon Stewart started making waves across the country, during a very politically unstable time. Bassem Youssef’s satirical show took aim at politicians and ridiculed government propaganda, and his ratings skyrocketed. But with so many viewers watching, Youssef managed to upset the government and was arrested for insulting the president.

Egyptian authorities forced Youssef to flee in 2014 because of jokes he told and he now lives in the U.S.

“Satire has been around in every culture in every period of time,” McClennen said. “People like to sass people who are messing with them … especially in a time of crisis.”

So is the U.S. in a state of political crisis?

If satire news shows are on the rise, does this mean there is political turbulence in the Trump administration?

“The answer depends on what one considers turbulence or controversy. Many Conservatives considered Barack Obama controversial, but did we not see a rise in satire,” said Jody Baumgartner, professor in political science at East Carolina University.

“On the other hand, George W. Bush was controversial for liberals and we did see a rise in satire. But some people didn’t think [the U.S.] was in was political turmoil.”

Baumgartner said this is because, in the modern era of satire, the platform is largely a liberal enterprise. So if the Republicans are in the White House, political satire will rise.

South Park writers, Trey Stone and Matt Parker, known to go after anyone on the political spectrum, told the Australian Broadcasting Company in 2017 that criticizing the current U.S. administration has become challenging because “satire has become reality.”

McClennen added that another reason why political satire is booming under Trump is that it’s profitable.

“Colbert at first was trying to be middle of the road in politics, but the show was floundering. So he went back and got some teeth and his ratings popped,” she said.

“Satire does a better job of covering Trump than straight news. They go after lies and do not have to worry about fairness and talk with people on both sides,” she said.

McClennen said because many satire shows are typically left-leaning, this could lead to political polarization, but it’s difficult to tell.

“Can satire can increase polarization? That can be true, but it’s the cart before the horse argument. Polarization has been on the rise anyways and satire is just making fun of it.”

Baumgartner, who wrote an article called the Daily Show Effect, said although satire is fundamental for democracy, it can increase cynicism and distrust in politics.

“At the end of the day, a constant barrage of satire could make you more cynical, or it may just but reinforce it. Maybe already cynical people are already watching these shows.”