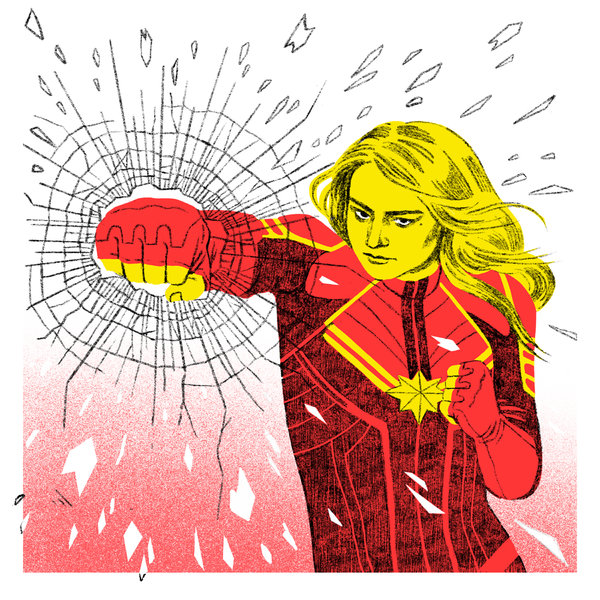 You’re reading In Her Words, where women rule the headlines. Sign up here to get it delivered to your inbox. Let me know what you think at [email protected].

“This is not a revolution, it’s a restoration. Girls have always read comics.”

— Kelly Sue DeConnick, the comic book writer whose reimagining of Captain Marvel was the basis of the new film

Trolls tried to torpedo the new “Captain Marvel” movie — but in the end, the shero Carol Danvers (who’s been Captain Marvel in the comic books since 2012) prevailed. The film sailed past $500 million in ticket sales in its first week.

ICYMI: Within hours of the movie’s release on March 8 (International Women’s Day), in what appeared to be a concerted effort, some 58,000 online reviews of “Captain Marvel” had tanked its rating on Rotten Tomatoes — leaving the film with an abysmal score of around 30 percent.

Rotten Tomatoes fixed the problem by that afternoon, removing about 50,000 of the reviews, which the site said had been written before the film was released. Among other measures, the site swiftly eliminated prerelease audience reviews altogether.

“We’re doing it to more accurately and authentically represent the voice of fans,” the site said, “while protecting our data and public forums from bad actors.”

Now, the movie’s audience score is around 62 percent, and the “Tomatometer,” which analyzes ratings from film critics, is at 79 percent, slightly below the average for Marvel movies.

But “Captain Marvel” is not the only recent female-led film in the comic or sci-fi realm to be swarmed by trolls. As my colleague Cara Buckley wrote this week: “The all-female remake of ‘Ghostbusters,’ ‘Black Panther’ and ‘Star Wars: The Last Jedi,’ which had a diverse cast, all found themselves in the cross hairs of armchair critics, some aligned with alt-right groups.”

Last year, a Facebook group called “Down with Disney’s Treatment of Franchises and Its Fanboys” posted an event called “Give Black Panther a Rotten Audience Score on Rotten Tomatoes.” The group had also claimed responsibility for sinking scores for “Star Wars: The Last Jedi.”

Those who appeared to have targeted “Captain Marvel” were most likely incited by comments made by Brie Larson, the titular star. Last year, Larson vowed to seek out more underrepresented journalists after noticing she was being interviewed by mostly white men. She had a similar critique about film critics: “I do not need a 40-year-old white dude to tell me what didn’t work for him about ‘A Wrinkle in Time.’ It wasn’t made for him.”

She also told “Entertainment Tonight” that the vision for the film was clear during an early meeting with Marvel: Make “a big feminist movie.”

Even if the trolls tried to stop her, make a big feminist movie she did.

Sign up here to get In Her Words delivered to your inbox!

Study: Even in a galaxy far, far away, women can’t have love and power.

As the “Star Wars” heroines Padmé Amidala and Princess Leia fell in love with Anakin Skywalker and Han Solo, respectively, their outfits grew more skimpy, they grew more helpless, and their focus shifted away from their roles as political leaders and toward more passive roles as romantic partners, according to a new study by researchers at Florida State University.

"Objectification is obvious with costumes like Leia's gold bikini or Padmé’s black leather corset dress,” said Mary C. King, one of the researchers. But it was the many subtle ways that characters’ looks were altered — more color, softer hairstyles — that she said surprised researchers the most.

What else is happening

Here are five articles from The Times you might have missed.

“You felt like you were a piece of meat.” Female veterans say a culture of harassment and discrimination exists in the V.A. medical system. [Read the story]

“I believe fundamentally there was a gender bias at issue.” After 55,000 old rape kits were finally tested with funds provided by the Manhattan district attorney’s office, 64 attackers were convicted. [Read the story]

“I am cozy because I have to be. I am cozy to survive.” Lena Dunham writes about her struggle with chronic pain and how coziness is her “religion.” [Read the story]

“Here is this amazing kid who volunteered to fight and die for our country.” In interviews, dozens of transgender troops said that they felt supported in the armed services, despite the hostile Trump administration. [Read the story]

“What does it take?” This week, the largest college entry scandal in the U.S. underscored the racial and economic disparities that plague access to higher education. [Read the story]

Are you in New York next week? Come celebrate Women’s History Month with a night of conversation and comedy, including “Handmaid’s Tale: The Musical,” with The New York Times Opinion section. Get tickets here.

For Women’s History Month, we’re highlighting stories of trailblazing women you may not know, but should. We’ll bring you two women each week in this newsletter. Head over to our Instagram for daily posts.

In her top hat and tuxedo, Gladys Bentley belted gender-bending original blues numbers and lewd parodies of popular songs, eventually becoming 1920s Harlem royalty. When not accompanied by a dazzling piano, the singer often swept through the audience, flirting with women and soliciting dirty lyrics from them as she sang.

By the early 1930s, Bentley was Harlem’s most famous lesbian figure and among the best-known black entertainers in the U.S. She was also the first prominent performer of her era to embrace a transgender identity.

Sign up here to get future installments of In Her Words delivered to your inbox.