‘I’m Just Going to Wing It’

Trevor Noah said that while “for months now, Warren has been releasing policies faster than Netflix releases documentaries about serial killers” and Harris issued a “powerful threat” to Congress regarding gun control, Buttigieg’s sidestepping questions about actual policies revealed his male privilege.

“You have to admit, running for president as a man is so much more fun because as a woman, you have to bring extra homework. Elizabeth Warren calculated 2 cents on every dollar over 50 million. Kamala is breaking down the statistics on maternal mortality as relates to race and class. But a dude can come and be like, ‘Yeah, I’m just going to wing it.’” — TREVOR NOAH

Conan O’Brien mentioned a new poll revealing that Joe Biden is the top candidate among college students, with Sanders in second place. “Apparently college students are excited to not show up to vote for either one,” he said. This led into his next joke about a hot topic at the town hall: Sanders’s belief that prisoners convicted of felonies should be able to vote.

“Bernie is building an unusual constituency made up of millennials and Bill Cosby.” — CONAN O’BRIEN

The Mueller report continued to offer late-night fodder, especially with the debate over impeachment. Michael Kostal, a “Daily Show” correspondent, illustrated why he thinks America should wait, using an extended metaphor.

“I know a lot of the younger Democrats want to impeach right away, but impeachment is a special thing that should be saved for the president who truly deserves it, O.K.? You don’t want to look back and regret who you impeached. In the meantime, there’s a lot of other ways Democrats can satisfy these urges they’re feeling. They can use their hands to issue subpoenas or use their mouth to denounce Trump’s actions, and if hands and mouth stuff isn’t good enough, they can practice impeaching themselves. It doesn’t feel the same, but it’s still good.” — MICHAEL KOSTAL

“Everything sounds more reasonable when you put it into cents. Genius! That’s why when they ask you to sponsor an African kid, they say, ‘For 80 cents a day, you can help this child.’ But if they say, ‘You can help this child for $298 a year,’ you will be like, ‘That’s an Xbox. You’re on your own, Mufasa.’” — TREVOR NOAH, on Elizabeth Warren’s framing of her tax proposal

“Elizabeth Warren says, ‘Free school for all,’ and methinks her idea hath some legs. So, come 2020, head to class in the fall and spend all of your money on kegs.” — JIMMY FALLON, paying tribute to William Shakespeare on his birthday by delivering the news in his style

“I get why Bernie is concerned about slippery slopes — partly because America has a history of using imprisonment to disenfranchise minority voters, and partly because slippery things are every old man’s worst nightmare.” — TREVOR NOAH

“Is that a town hall for Bernie or is that ‘Weekend at Bernie’s’?” — JIMMY FALLON, showing Bernie Sanders slumping in his chair during the CNN town hall

Many people have tried pairing “The Wizard of Oz” with Pink Floyd’s “Dark Side of the Moon.” On “Conan,” the comic and actor Vir Das shared his preferred pairing: President Trump’s late-night tweets and “Bohemian Rhapsody” by Queen.

Brie Larson will pop by “The Tonight Show” to talk about the upcoming “Avengers: Endgame.” 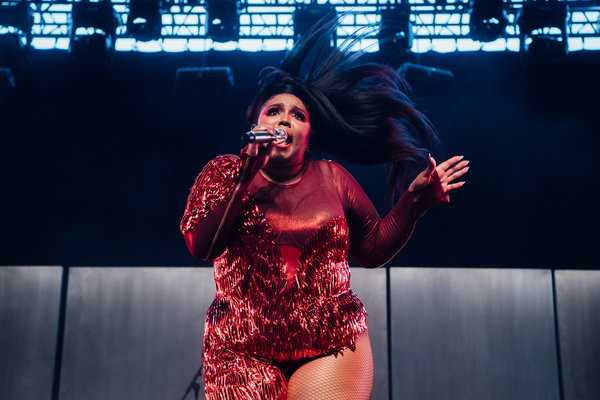 Lizzo’s new album “Cuz I Love You” features collaborations with Missy Elliott and Gucci Mane, but her single “Juice” is a notable standout. This week’s “Diary of a Song” delves into how the rapper, singer and flutist created a contemporary pop classic.