‘Who’s He Going to Go After Next?’

President Trump this week returned to one of his old hobby horses: attacking John McCain.

His latest remarks about the senator and war hero, who died last year from brain cancer, drew rebukes from the McCain family — and some exasperated ridicule from Trevor Noah.

Trump declared during a speech on Wednesday that he had “never liked him much,” then went on to exaggerate his involvement in McCain’s full-dress funeral. “I gave him the kind of funeral that he wanted, which as president I had to approve,” Trump said. “I don’t care about this. I didn’t get ‘thank you.’ That’s O.K.”

“That’s right folks, not even a thank you for the beautiful funeral I gave him. And worst of all, he slept through the entire thing, folks. But that’s O.K., folks, I don’t care. That’s why I’m bringing it up.” — TREVOR NOAH, impersonating Trump

“I really can’t believe Trump is beefing with a dead man — and losing. Like, I mean, who’s he going to go after next? [impersonating Trump] ‘Albert Einstein, big dummy. How can E equal MC? They’re different letters! It doesn’t work, folks.’” — TREVOR NOAH

Bee on the Democratic Field

With more than a dozen Democrats already in the presidential race and various others likely to join, Samantha Bee gave viewers a quick rundown of the field.

And she pointed out that Washington’s governor, Jay Inslee, “is the only candidate making climate change his top priority. So our only hope for the survival of humanity is a presidential victory for Jay Inslee — we are super [expletive].”

Stephen Colbert continues to breathlessly await the report of Robert S. Mueller III, the special counsel, on Russian interference in the 2016 election. Some sources close to Mueller have indicated that his investigation is close to concluding, but no official word has been given to the public.

“Everyone is breathlessly waiting for the Mueller report to come out, and there have been signs today that it might, maybe, possibly, definitely, or not, be released soon,” Colbert said on Wednesday.

“We just learned that one of Mueller’s prosecutors ‘has concluded her detail,’ making her the third senior member of Mueller’s team whose plans have been confirmed in recent weeks to leave. You know what that means! Probably something!” — STEPHEN COLBERT

“It’s like we’re three-quarters of the way through a ‘Scooby-Doo’ episode. Just pull the mask off the monster, O.K.? We know it’s Old Man Trump. [impersonating Trump] ‘I would’ve gotten away with it, too, if I wasn’t totally guilty.’” — STEPHEN COLBERT

“It’s the first day of spring! Can you feel it? You can feel it everywhere, right? I mean, you can tell. Here in New York, the winter street urine has begun to thaw, in Philadelphia, Gritty is shedding his winter coat, and in Washington, D.C., Ben Carson is coming out of hibernation.” — TREVOR NOAH

“A new CNN poll found that even though he’s not officially campaigning, Joe Biden is the front-runner for the Democratic nomination. Biden was thrilled. He said he hadn’t accomplished this much without doing anything since he was vice president.” — JIMMY KIMMEL

“Genetic testing company 23andMe can now tell customers if they are at a risk of developing Type 2 diabetes. ‘So can we,’ said Seamless.” — SETH MEYERS

Jimmy Kimmel lit a small firestorm this week in Spokane, Wash., when he said he wasn’t sure Gonzaga University was a real school. On Thursday, he looked at the defensive news coverage and angry tweets that his sarcasm elicited.

At “The Late Show’s” request, Representative Alexandria Ocasio-Cortez answered some questions. Like: “What’s the most surprising thing about Washington?” and “Do you have anything in common with Mitch McConnell?”

The seventh and final season of “Veep” will debut on HBO this month. On Thursday, Julia Louis-Dreyfus, the show’s star, will sit down with Jimmy Fallon. (Also appearing: the cast members of “Ain’t Too Proud” — a new Broadway musical about the Temptations — who will perform a song.) 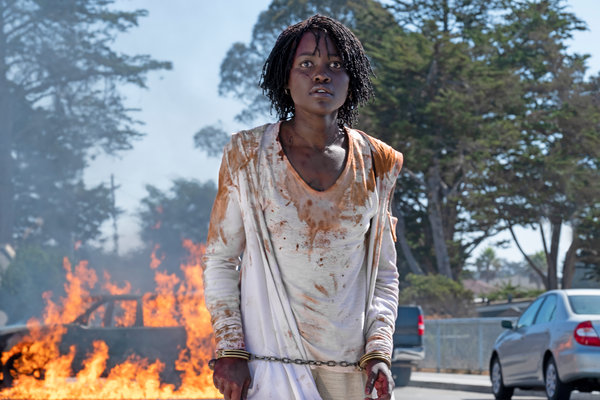 “Us,” Jordan Peele’s follow-up to his Oscar-winning directorial debut, “Get Out,” is finally here. And our co-chief film critic is raving about it. She calls it “an expansive philosophical hall of mirrors.”