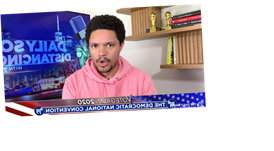 In his recap of Monday night’s Democratic National Convention opener, Trevor Noah praised former first lady Michelle Obama for bringing down the house and reviewed some of the flak she received from one particular critic.

Obama’s much-lauded speech took aim at President Donald Trump for sowing chaos and division and failing to lead with empathy. She said Trump was in over his head and urged voters to elect former Vice President Joe Biden in November.

The president hit back at Obama in a series of outraged tweets and in remarks at the White House on Tuesday.

“Well she’s in over her head, and frankly, she should’ve made the speech live, which she didn’t do,” Trump said. “She taped it. And it was not only taped, it was taped a long time ago, because she had the wrong deaths.”

Check out the clip on “The Daily Show” below: