It is an almost incomprehensible number: 46 million. That is how many items the New York Public Library says it has in its collection, and not all of them are books.

There is a 16th-century globe that shows how little European cartographers knew in those days. North America appears as a smattering of islands. Near the Equator are the Latin words for “Here lie dragons.”

There is a draft of the Bill of Rights with two possible constitutional amendments that were never ratified.

And there is a handwritten draft of the Declaration of Independence by Thomas Jefferson. There is what looks like a semicolon after “We hold these truths to be self-evident” — not the comma that appeared in the printed version. And there is material that was deleted before the Second Continental Congress adopted it, including a condemnation of the slave trade. What did Jefferson mean? And, did the comma make a difference in the very first line?

The president of the library, Anthony W. Marx, hopes that people will ask such questions when the library puts these treasures on display next year in a new gallery, along with a sizable list of other intriguing items that it has acquired over the years. Among them is a copy of “A Christmas Carol” by Charles Dickens — specifically, the copy that Dickens carried on an American tour in the mid-19th century, with notes he scribbled in the margins about passages he read aloud during lectures.

Want more Dickens? The gallery will have his letter opener, made from the paw of his cat Bob, to whom the curators say Dickens was passionately devoted.

Want a dog rather than a cat? The gallery will have Elizabeth Barrett Browning’s notebook. Amid drafts of poems is a page with a sketch of her dog Flush.

Also going into the gallery will be a copy of “The Green Book,” the guide for black travelers in the days of Jim Crow that was made famous by the 2018 film starring Viggo Mortensen and Mahershala Ali. At the Academy Awards on Feb. 24, the film won best picture, and Mr. Ali won best supporting actor.

These items have always been available to scholars and researchers, but the library hopes to broaden awareness by showing them in the new gallery in its main building on Fifth Avenue at 42nd Street in Manhattan. The goal is to pique the interest of visitors — to make them wonder what else the library stowed away over the years as it carried out its mission of collecting and preserving the world’s knowledge.

“At a time when the very notion of fact is in dispute, we store the records that have all the facts,” Dr. Marx said. “It’s essential that people understand that and use what’s here to be informed.”

And there is a lot to use. Dr. Marx, who became president of the library in 2011 after eight years as president of Amherst College, said that when he arrived, he was “stunned and shocked to see the treasures we have here that most people don’t know exist.”

“That’s because we don’t show them very often,” he said. “The Bill of Rights, we only showed at the Bicentennial for a couple of days” in 1976.

But the library is not a museum and is not trying to become one. Still, like a museum, it cannot show everything it has at any onetime. So for starters, Dr. Marx said that the library’s curators had picked some of its “most historically powerful and important material” for the exhibition space. 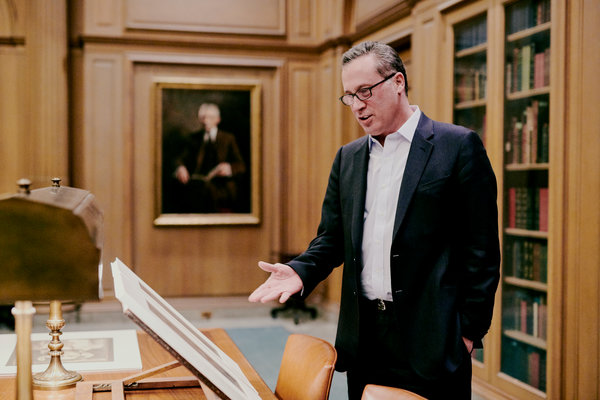 The gallery project is part of a $317 million master plan, adopted in 2017, that also calls for turning some office space into a cafe. The gallery will occupy a large room a few steps away — Gottesman Hall, which had housed temporary exhibitions.

The project — the remodeling of Gottesman Hall and the curator who will oversee it — is being paid for from a $12 million donation from the Polonsky Foundation and the financier Leonard S. Polonsky, who has long lived in London but has New York roots. He grew up in Brooklyn, attended Townsend Harris High School (where he was Student Council president and editor of the literary magazine) and New York University before going on to Oxford and the Sorbonne.

Also envisioned in the master plan is a new education center where high school and college classes can learn how to do primary research — and actually do some.

The gallery in Gottesman Hall will give the library a way to capitalize on New York’s tourism economy, which has defied predictions that the Trump administration’s protectionist policies and America-first rhetoric would change where travelers decide to go. The number of visitors to the city rose to a record high of 65.2 million in 2018, the ninth straight annual increase.

But tourism is not something the library tracks closely. Library officials do not have detailed data on how many people passing between the lions that keep watch at the main entrance are tourists visiting a famous New York landmark, how many are ordinary readers looking for a book and how many are scholars or researchers seeking to examine an obscure volume that can be found only at the library.

Still, Dr. Marx estimated that half are tourists and half are researchers. Surveys have indicated that about 30 percent of the visitors live outside of New York City.

Whatever the figures, the exhibition of treasures will be about much more than show and tell. “This isn’t simply an opportunity to see things in glass cases, but to understand the importance of primary research,” said William Kelly, the director of the library’s four research centers. “It’s a chance to unearth stories from the material.”

Consider the library’s copy of the Jefferson draft, one of four known to exist. Dr. Marx said it showed how he edited one of America’s essential documents. “You can see that the most hallowed document in American history was up for debate up to the very last minutes,” he said.

He and Dr. Kelly moved on to the only known copy of the first printing of a letter from Christopher Columbus from 1493 that said, as Dr. Marx put it, “I think I found something.” Dr. Marx said it summarized Columbus’s vision for the New World, opening the way to “every argument for colonialism that would be invented in the 300 years after.”

“It’s an amazing thing to contemplate,” he said. “I taught third-world development and colonialism at Columbia for 13 years, and I didn’t know this letter existed. It’s an amazing teaching tool. Read the original, debate it.”