LONDON — Edvard Munch wasn’t shy of suffering. When his fiancée accidentally shot him in the hand, in 1902, he insisted on a local rather than a general anesthetic, so that he could watch the operation to fix the damage.

Now, at the Royal Academy of Arts, the Norwegian painter has found a kindred spirit in the contemporary British artist Tracey Emin, whose work has an equally unflinching relationship to pain.

Ms. Emin is associated with the Young British Artists, or Y.B.A.s, who scandalized the British tabloids in the late 1980s and the 1990s: think of Mat Collishaw’s huge, blown-up image of a head wound, or Damien Hirst’s shark in formaldehyde. But Ms. Emin’s work has always blazed with a more eccentric, confessional energy.

Opening Dec. 7 and running through Feb. 28, 2021, the exhibition was supposed to inaugurate a new building for the Munch Museum in Oslo in the spring, but construction ran behind schedule, and then came the pandemic. The presentation at the Royal Academy was also delayed, by a four-week national lockdown in England that has just come to an end, and which will only make visitors more attuned to its title: “The Loneliness of the Soul.”

Born in 1963, exactly 100 years after Munch, Ms. Emin has been drawn to Munch since the start of her career, referencing his bristly, nervy painting style as far back as her graduating show from the Royal College of Art. So when the Munch Museum invited her to select work from its collection to display in dialogue with her own, it was “a magical chance of a lifetime,” she said in an acknowledgment in the catalog. 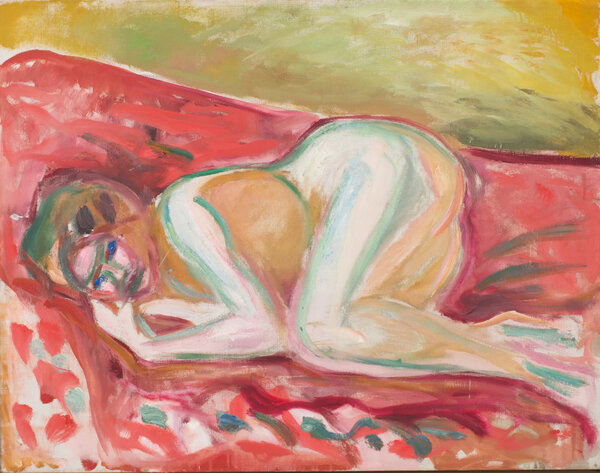 In her Super-8 video “Homage to Edvard Munch and All My Dead Children,” from 1998, Ms. Emin crouches in a fetal position at the end of a jetty in a fjord, before releasing guttural cry that lasts an unbearable whole minute. The work responds to Munch’s most famous work, and although there is plenty of existential angst in the Royal Academy show, there is no sign of “The Scream.”

Like Munch, whose output of 1,700 paintings tends to be overshadowed by his greatest hit, Ms. Emin is still notorious for her 1998 installation “My Bed,” which reconstructs the artist’s disheveled bedroom after a drunken night out, complete with stained sheets, cigarette butts, worn underpants, a used condom and empty vodka bottles. That work earned Ms. Emin a nomination for the Turner Prize, at a time when the award could make front-page news in Britain.

“My Bed” will feature in an expanded version of the exhibition when it finally reaches Oslo, where it will be Ms. Emin’s first major show in Scandinavia. But in the three galleries at the Royal Academy, the focus is on painting and the female nude, with 18 works by Munch, and 26 by Ms. Emin.

That energy arrests the visitor from the exhibition’s opening room. Seven large paintings by Ms. Emin are softly lit against dark teal walls, which accentuate the visceral colors of sketched figures writhing against bare canvas. Discreetly interspersed are Munch’s female nudes: A cluster of 10 studies in watercolor, as well as a painting of a woman curled forlornly on her side on a divan and another of a woman sitting naked in bed, her gaze cast aside. Sending a charge through the room is a neon sign in uppercase letters that refers (using a term too crude to print in The New York Times) to a vagina “wet with fear.”

Both artists are seduced by, and yet uneasy with, strong women. Munch had difficult romantic affairs throughout his life and never settled in a long-term relationship (remember his fiancée’s gunshot). In a journal entry, he wrote that “a lady has permission to intrigue,” and “seduce a man — ruin a man with lies.”

In his painting “The Death of Marat II,” from 1907, a naked woman stands in front of the sprawled body of a dead man. The title recalls the murder of the French revolutionary Jean-Paul Marat in his bathtub by Charlotte Corday, but now Munch appears to be the victim and there is blood on his hand.

Drawn from her own body, literally and figuratively, Ms. Emin’s nudes have a different power. “You Came to Me at Night,” a 2017 painting, features an ominous, faceless figure, head slightly lowered, with dark gray brushwork shrouding the torso and dripping onto the sketched knees and shins below. Other figures kneel or lie prone, their submissive positions suggesting a body that hurts and bleeds, that can be abused, impregnated and miscarry.

Many critics have been unconvinced by the emotional register of Ms. Emin’s paintings, considering them to be derivative of the emotionally expressive scrawls and dribbles of a pantheon of male artists.

Certainly, there are allusions beyond Munch, most notably to Egon Schiele’s febrile lines, Cy Twombly’s smudgy white clouds and shaky lettering, and Francis Bacon’s wrestling figures. But Munch also borrowed, from Paul Gauguin, Vincent van Gogh and Édouard Manet, among others. The old saying goes that “Good artists copy, and great artists steal,” but too often we accuse women of the former and celebrate men for the latter.

The real sting here is about authenticity. Can a work course with real pain if it exists in multiple, or pirates another voice? Does an expression of trauma have to be unique? Munch made two paintings, two pastels and several prints of “The Scream,” yet that image holds its force.

There is no intravenous connection to our pain. Artists can only work with their materials, to give an impression of their emotional landscape and perhaps provoke a sympathetic response in ours.

It is hard not to look at Ms. Emin’s anguished figures in light of her recent interview with The Sunday Times of London, in which she spoke candidly about a brutal struggle with cancer, including surgery to remove her uterus, fallopian tubes and ovaries, as well as parts of her colon and genitals. Her work has always grappled with the vulnerability of life, but now the specter of mortality hangs low, and the poignancy of these pictures feels more acute.