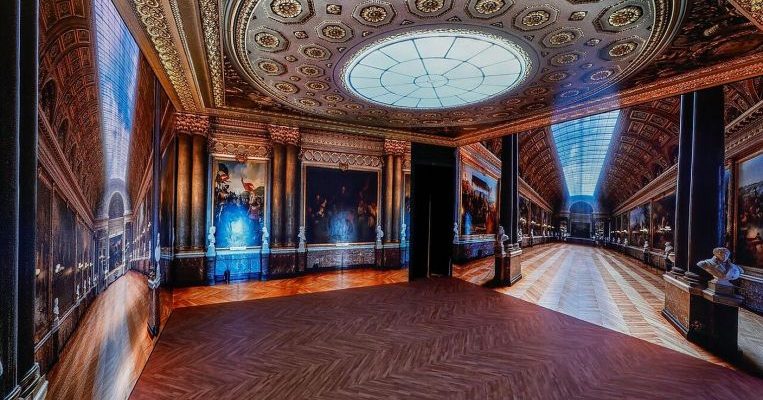 A new exhibition in Singapore lets visitors tour the famous Palace of Versailles outside Paris in France, including cycling through its famous gardens, for free.

Virtually Versailles, presented by the Palace of Versailles and Essec Business School – which was founded in France and has a campus at One-North – sheds light on the history and artworks of the 17th-century palace using immersive digital and virtual reality (VR) technology.

The travelling exhibition, which is making its global debut here, is at Ion Orchard till Jan 6. It is part of a series of events in Singapore and France marking the France-Singapore Year of Innovation 2018, which highlights the scientific and research partnership between the two countries.

“With Virtually Versailles, we had this crazy idea of a digital and itinerant Versailles that would allow visitors to relive the magic of Versailles,” she adds. She hopes to take the exhibition to other parts of Asia, America and Africa.

The Palace of Versailles, which today occupies 830ha of an area about 20km south-west of Paris, has long been a byword for aristocratic extravagance, with its ornamental gardens, dazzling interiors and firework displays.

It started as a royal hunting lodge in 1623 for King Louis XIII and went through a series of expansion works. In 1682, King Louis XIV moved the court and government to Versailles, which would remain the seat of the royals up till his death in 1715. Later, it was used for parties and entertainment until the start of the French Revolution in 1789, when King Louis XVI and his wife Marie Antoinette were taken to Paris and later beheaded at the guillotine.

Virtually Versailles, conceptualised by Singapore-based creative agency Lumina Live!, is spread over 520 sq m on the fourth and 56th floors of the shopping mall.

As visitors enter the fourth floor space, they are greeted by the reconstructed voice of King Louis XIV, a specially-concocted scent inspired by the orange blossom – his favourite flower – and interactive touchscreens that describe the artworks.

Lumina Live! founder and managing director David See says it was challenging to conceptualise the Splendours room. The room gives visitors a virtual view of five palace interiors, including the 73m-long Hall of Mirrors, which has 357 mirrors. This was where the Treaty of Versailles was signed in 1919 at the end of World War I.

The 2.5m-high Splendours room, whose walls and ceiling are covered with LEDs, shows one of the five interiors at a time.

“The actual spaces are much bigger and taller,” Mr See says. “Quite a lot of content had to be edited and stitched to the correct size.”

Among the highlights in the second half of the exhibition are a VR feature by Google Arts & Culture, which allows visitors to explore the rooms and artworks in the palace, and another VR feature by the Orange Foundation – the philanthropic arm of Orange Group, a French multinational telecommunications corporation – which lets visitors time-travel to Versailles of the past. In the latter, they can relive the visit of the ambassadors of Siam in 1686, and the lavish Yew Ball in 1745, when 15,000 people were reported to have attended the masked ball held in the Hall of Mirrors with King Louis XV and several of his courtiers dressed as topiary yew trees.

Retired banker Florence Teo, 67, was at the exhibition last Thursday with her husband and grandchildren, aged three, six and seven.

She said: “I like it very much. The pictures are very vivid. I think if we go to Paris to visit the Palace of Versailles, it will be very crowded. Here, at least, there aren’t that many visitors in the morning.”

Visitors can take part in a contest and stand a chance to win a trip to Versailles. It includes a pair of round-trip air tickets, free admission to the Palace of Versailles and a one-night stay in a hotel.

They have till Jan 6 to take a photo of their favourite spot in the exhibition, post it on Instagram and say why they want to visit the real Versailles, among other things. More details can be found online.