Tony Tanner, a versatile actor, writer and director whose biggest Broadway success was directing “Joseph and the Amazing Technicolor Dreamcoat” in 1982, a production that helped make that musical a staple of American community and high school theater, died on Sept. 8 at his home in Los Angeles. He was 88.

His husband, Henry Selvitelle, confirmed the death but did not specify the cause.

Mr. Tanner had respectable if not particularly flashy careers in his native Britain as well as in the United States, with his staging of “Joseph” perhaps the high point. A colorful telling of the biblical story of Joseph, it had started out in the 1960s as a school project of Andrew Lloyd Webber (music) and Tim Rice (lyrics), and had been performed regularly in Britain and the United States over the years. But Mr. Tanner’s Broadway version elevated its profile considerably.

The show started Off Broadway at the Entermedia Theater in the East Village before transferring to Broadway, where it ran for more than a year and a half and earned Mr. Tanner two Tony Award nominations, for best direction of a musical and best choreography. Its most lasting effect — vital to high school and college theater departments everywhere — was to make it standard practice to cast a woman in the part of the Narrator, a role as important as that of Joseph himself.

Most, though not all, previous productions had made the Narrator male. Mr. Tanner, in an essay on his website, said that had originally been his concept as well.

“Someone did it in Brooklyn with a Black man playing the Narrator, so that’s what we looked for,” he wrote. “Believe it or not, could not find the right one in New York City. ‘Bring in the girls,’ I said.”

The role went to Laurie Beechman, who in 1984, as a replacement player, would step into another Lloyd Webber musical, “Cats,” in the role of Grizabella (who sings the famous “Memory”). Her work in “Joseph” earned her a Tony nomination for best featured actress in a musical.

“We found Laurie Beechman with the soaring, searing voice and we had it made,” Mr. Tanner wrote. 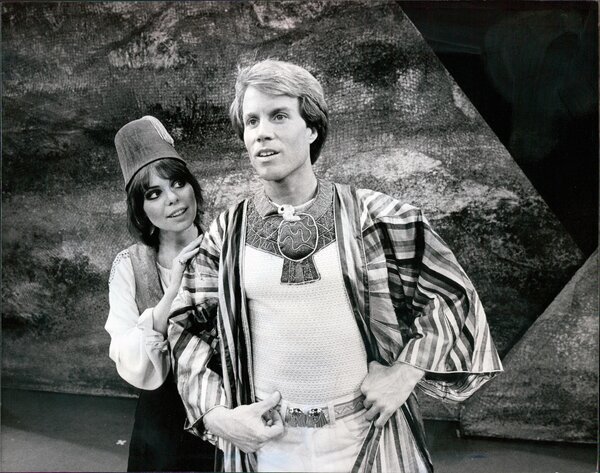 Despite claims to the contrary, Mr. Tanner maintained that casting a woman was his idea.

“Later the producer of the show claimed the idea, since adopted by all subsequent producers of the show, was his,” he wrote, without naming the person (the show had several producers). “It wasn’t.”

Anthony Roy Tanner was born on July 27, 1932, in Hillingdon, England, west of London, to Herbert and Frances Tanner. He attended the Webber Douglas Academy of Dramatic Art in London.

In the 1950s he worked in various British repertory companies, playing, as he put it, “Saint Peter, Jimmy Porter in ‘Look Back in Anger,’ a cigar-smoking American Air Force colonel (at age 21) and the front end of a cow in ‘Jack and the Beanstalk,’” among other roles.

In the early 1960s he replaced Anthony Newley as Littlechap, Mr. Newley’s signature role, in “Stop the World, I Want to Get Off” at the Queen’s Theater in London. He also played the part in a 1966 film version.

A chance to replace Tommy Steele in the lead role of the 1965 Broadway production of “Half a Sixpence” brought him to the United States. His next turn on Broadway was in 1973 in a leading role in “No Sex Please, We’re British,” a play that didn’t last long but gave him a chance to use everything in his comedic bag of tricks.

“Tony Tanner,” Clive Barnes wrote in The New York Times, “in the leading role of the absurd friend, pulls faces with vigor, whines in a nasal, distorted and effeminate cockney, has a funny trick trying to get from a chair while loaded down with a pile of books, and jumps through windows with a pleasing disregard for personal safety.”

Mr. Tanner directed and choreographed “Something’s Afoot” on Broadway in 1976, then returned two years later as director of “Gorey Stories,” a work by the writer and artist Edward Gorey. The piece had received a strong review in The Times when it opened the previous year Off Broadway under Mr. Tanner’s direction: Mel Gussow called it “a merrily sinister musical collage of Goreyana.” The review, Mr. Tanner wrote on his website, led the producers to move the show to the Booth Theater on Broadway.

“I was kicking and screaming all the way,” Mr. Tanner told The Los Angeles Times in 1992, when he restaged the work in Hollywood. “The Booth is too big a theater. People paying $27.50, or whatever the price was then, don’t want to be told to use their imagination. They want to see it.”

Not helping matters was that there was no New York Times rave — by October 1978, when the Broadway version opened, the paper was on strike. Other reviews were generally mixed.

“The day after we opened,” Mr. Tanner recalled, “we got telephone calls from the theater to come pick up our makeup because we weren’t going to be playing that night,” he added. “It’s one of those delightful experiences that really does make you want to go into selling cosmetics door to door.”

Mr. Tanner had a late-career success with a one-man show that he wrote and performed, “Charlatan,” about the life and times of the Russian ballet impresario Serge Diaghilev, who had fascinated Mr. Tanner since he read a book about him when he was 12. He performed the show at theater festivals in the United States and abroad.