“Do you want to see some worms?” Matt Walker asked on a recent Monday afternoon, standing over a microscope inside a biology lab at Columbia University.

I sat down and peered through the lens where some squiggly lines, presumably the worms, were visible. Mr. Walker, 25, rubbed his forehead and plucked a strand from his eyebrow and carefully placed it inside a thin clamp-like device called a pipette tip.

He invited me to tickle the worms with his eyebrow, just as he does on a daily basis — part of his job as a neurobiology researcher, working under Martin Chalfie, who won the 2008 Nobel Prize in Chemistry.

It’s an interesting project, but that’s not what makes Mr. Walker especially unusual.

Hours after leaving the lab, he will be hustling downtown to New World Stages where he will go from tickling worms to tickling funny bones. Mr. Walker recently got his big acting break, landing a starring role in the Off Broadway version of “The Play That Goes Wrong,” a farce that recently reopened after a successful run on Broadway.

The two professions have very little overlap, Mr. Walker is quick to point out.

“There is occasionally an idea in acting that the more you understand about the human mind, the more you can get into character,” he explained. “Maybe. But that’s not what I do in research.”

Rather, for two-and-a-half years, he has been learning about the sensations of touch — particularly in worms — to gain expertise in the biology of neurons.

Even in an industry where many performers routinely work day jobs, especially between gigs, Mr. Walker’s is rare pairing.

“Usually, if they have a side job, it’s in hospitality or real estate, or they are babysitters,” Matt DiCarlo, the director of the show, said in a phone interview. “I have never come across somebody whose side hustle was being a neurobiologist.” 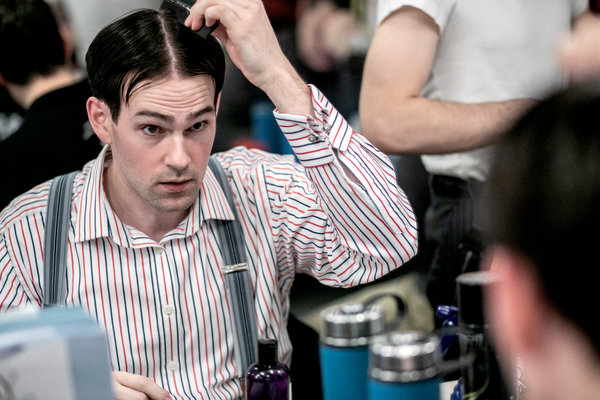 Mr. Walker, the son of a private equity executive and a retired lawyer, grew up in Toronto and started taking acting classes in high school, while also having a deep interest in science. He described himself as constantly curious.

Asked where that came from, he was stumped. Mr. Walker became curious about the curiosity: “I’m going to think about that,” he said.

At 16, he played the lead in a high school production of “Hamlet,” and then again a year later in “Romeo and Juliet.” He applied both to liberal arts colleges and acting schools.

Mr. Walker auditioned for the drama division at Juilliard, thinking it a long shot that would help him prepare to vie for other programs. In fact, he got in there and to seven other performing-arts schools, including Carnegie Mellon and New York University.

He also was admitted to Harvard University as an undecided major and faced another excruciating choice only available to the highest achieving among us: Harvard or Juilliard?

Mr. Walker did both. James Houghton, who was at the time the head of the drama division of Juilliard, gave him the option of only attending for a year, while deferring his enrollment at Harvard. If he enjoyed the program, he could stay. If not, Mr. Walker could attend Harvard without burning any bridges.

“In acting school, a lot of your training is based on your feelings and your intuition and your impulses. In the group, it was really nice to have someone who was a bit more cerebral and fact-based,” said Mary Wiseman, a classmate who currently plays Sylvia Tilly in the CBS All Access show “Star Trek: Discovery.”

Though he enjoyed the program, Mr. Walker left and enrolled at Harvard. He did theater on campus and off; as a sophomore he had a role as a student in a medical drama called “Ether Dome,” written by Elizabeth Egloff, for the Huntington Theater Company.

“Because I’m Canadian, the only way I could really work was if my work related to my studies,” Mr. Walker said. His role in the show counted.

In “The Play That Goes Wrong,” he plays Max, a hapless actor who cannot stop mugging for the audience while performing in a dusty whodunit called “The Murder at Haversham Manor.”

Within the faux play, Max plays two roles which require a lot of physicality: Cecil Haversham and Arthur the Gardener. There’s jumping, mime and swordplay; at one point, Mr. Walker gets hit by a floorboard during a fight.

“It definitely feels like a big contrast given how much of my day-to-day is spent in science,” Mr. Walker said of the show. “Research is quite strict and focused, whereas this role is endlessly playful. But I like to think that there is an attention to detail in both.

“Especially in a farce,” he added, “where the pace is so fast and there can be a lot happening onstage, the precision has to be there.”

Coincidentally, even his job at Columbia came about partially as a result of acting. Mr. Walker was performing at the Williamstown Theater Festival after college and was looking for work. He became friends with Dr. Chalfie’s daughter, Sarah, also an aspiring actress, who connected him to her father. (He also had an offer from a lab at New York University.)

“I think people have an idea that science, arts and academia don’t mix,” Dr. Chalfie said in his office. “That’s completely untrue.” In the past, he’s had a professional ballet dancer and a violinist as students.

Mr. Walker is considering graduate school for science, but wants to see how his acting career plays out. “The Play That Goes Wrong” has him on contract at least through April. (To rehearse the show, he took three weeks off from the lab last month.)

“There are parts of each that I love equally,” he said.

So in the meantime, he’ll do both. But there is one role Mr. Walker won’t be playing in the near future: He recently auditioned to portray a lab technician on a network television crime drama.

He didn’t get the part.