Every Monday, the Times TV critic Margaret Lyons picks the best of what’s ahead before the weekend. Check back each week for more recommendations.

I Want Something Funny 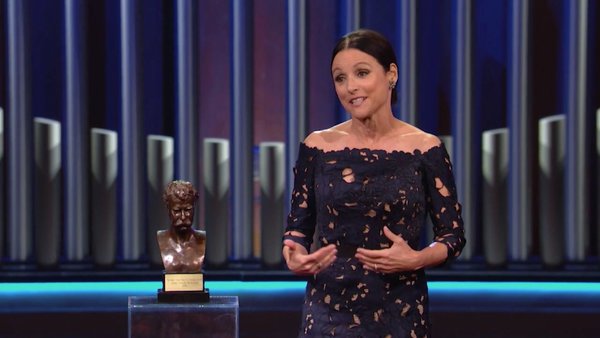 This pre-recorded ceremony honoring Julia Louis-Dreyfus’s contributions to American comedy starts pretty slow, so feel free to skip the first 30 minutes or so. Things pick up significantly with Ilana Glazer and Abbi Jacobson’s jokey-but-then-really-serious modern dance, and from there on out, everything is a lot of fun. If you only wanted one segment or needed a seven-minute pick-me-up right this second, here’s Kumail Nanjiani’s set.

I Want Something Gorgeous

‘The Little Drummer Girl’
When to watch: Monday, Tuesday and Wednesday at 9 p.m., on AMC.

You’re unlikely to find a more visually engaging and stylistically impressive six hours any time soon — and that’s because this mini-series was directed by Park Chan-wook. (AMC is airing two episodes at a time, three days in a row.) Based on a John le Carré novel, “Drummer” is set in the 1970s and centers on a young actress, Charlie (Florence Pugh), who gets recruited into an Israeli spy operation headed by Kurtz (Michael Shannon), who claims that everything is performance.

It is not the easiest plot to keep track of, and some of the spy mechanics are convoluted, but “Drummer” sweeps you along anyway, and it’s a beautiful ride. Sometimes spy stories move only between “sexy” and “dead,” and luckily this is much more shaded and challenging than that. There’s an emotional desperation at the core of most of its characters, rather than an impossible to relate to badassery.Read The Times’s full review of “The Little Drummer Girl.”

I Want Something Over the Top

‘The Final Table’
When to watch: Season 1 arrives Tuesday, on Netflix.

Picture “Iron Chef” and “MasterChef,” but times a million. “The Final Table” is another culinary competition show, this one somehow more extra than its ancestors. Twelve accomplished duos from around the world compete for top honors — but not for money, somehow — and on each episode they attempt to put their own spins on different national dishes (everyone tries to make an English breakfast, for example) and are judged by experts from that nation.

It’s intense and ridiculous and intensely ridiculous. How are the people on “The Great British Baking Show” stuck in a finnicky tent when these people cook in what appears to be a space ship?