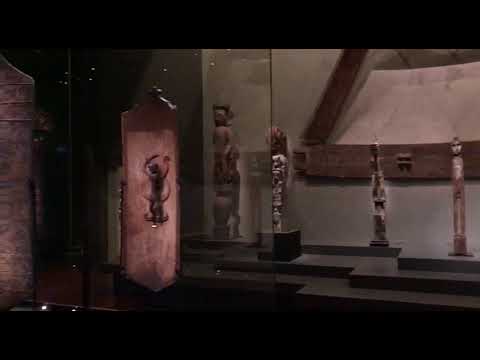 These galleries on the second level of the museum will show how systems of faith and belief spread across Asia, as well as how religious art adapted as a result. They have a South-east Asian focus.

With highlights ranging from a hornbill carving by Sarawak’s Iban community to a 17th-century sculpture of the Virgin Mary with possible Chinese, Filipino and Mexican influences, these new galleries are part of the museum’s move to organise galleries thematically rather than by geographic region.

The museum is also shifting from an ethnographic focus to one that pays more attention to art, said its director Kennie Ting at a media preview yesterday.

“What this means is not that we forget the cultural and historical significance of each object… but in the curation of the pieces here, we are also now focusing on the aesthetics, the elements of craftsmanship, design and tradition.

“The point to be made here, in presenting only masterpieces from Asia, is to say that in Asia, we have a very long tradition of excellent innovation and craftsmanship. We should be extremely proud of this heritage we have, particularly here in South-east Asia.”

VIEW IT / SOUTHEAST ASIA IN THE WORLD

WHEN: Daily from Saturday, 10am to 7pm (Saturdays to Thursdays) and 10am to 9pm (Fridays)

The Islamic Art gallery will occupy a space that formerly showcased South-east Asian jewellery and textiles.

The more than 150 works on display at the 200 sq m gallery range from an ornate 19th-century Quran from Terengganu in the Malay Peninsula to a prayer chart that was used at the now-demolished Wak Sumang Mosque in Punggol until 1995.

The Christian Art gallery, which takes over the space occupied previously by Islamic Art, will be the first permanent museum space in the world dedicated to showcasing Christian works of art that were made in Asia.

At the new Ancestors And Rituals gallery, which took over a 377 sq m space that used to display Chinese art, there are more than 240 works reflecting the ancestral and ritualistic beliefs of traditional societies.

These include a 18th-or 19th-century ornament from Pattani in the Malay Peninsula, which adorned a makara palanquin that was used in village ceremonies marking the circumcision of young boys.

Ancestors And Rituals contains works from the museum’s oldest collections, originally in the old Raffles Library and Museum.

The ACM is focusing more heavily on design and craftsmanship, Mr Ting says, adding that from early 2020, the museum’s third floor will showcase a pan-Asian collection of jewellery, fashion and textiles.

The launch of three new permanent galleries is a highlight of the museum’s Year of South-east Asia.

Mr Ting says: “The core of the museum’s collection was and continues to be the South-east Asian ethnographic collection that previously belonged to the former Raffles Library and Museum (today’s National Museum of Singapore) and which was collected during the colonial period.

“With these new and refreshed galleries, ACM places South-east Asia squarely at the heart of our museum’s overall curatorial narrative.”

Aside from the new galleries, the public can expect a rotation of new exhibits at the museum’s Trade galleries, as well as a new series of museum trails for adults and children.