TV: Another Round of Relationship Roulette on ‘Catastrophe’

It’s been 23 months — and who wasn’t counting? — since “Catastrophe” left us with a bang and a whimper. In the last moments of Season 3, Sharon (Sharon Horgan), who had been drunkenly mourning her father’s death, summoned Rob (Rob Delaney) to drive her home, unaware that he’d fallen off the sobriety wagon.

And then, right after Sharon vowed that she would never leave him, Rob collided with another car. His head bleeding, he tearfully announced that he wouldn’t pass a breathalyzer. Cut to black in more ways than one.

On Friday, March 15, the final season of this Amazon series picks up with Rob in a neck brace and on probation, his time consumed by work, A.A. meetings and community service. Leaving Sharon for all intents and purposes a single mother of two, and knocking this coupling from its newly solidified foundation back into the squidgy mire — his alcoholism, her disenchantment, their nonexistent sex life. And doing what “Catastrophe” always did best: keeping it filthy, funny and real. KATHRYN SHATTUCK 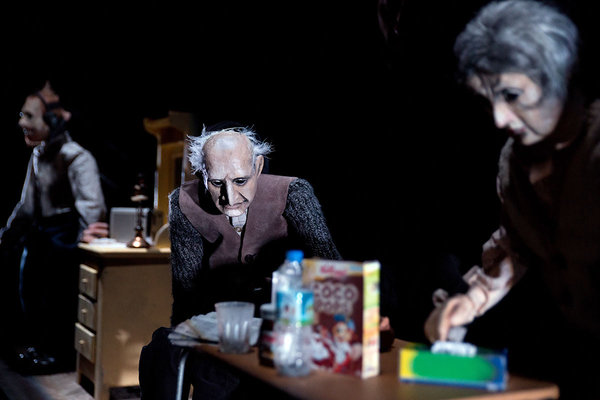 The first time I saw “Ashes,” a spectral stunner from the French-Norwegian company Plexus Polaire, it was running at a puppetry festival in Chicago under its French title, “Cendres.” A dark and flickering tale of an arsonist and the rural community he torments, it was quietly thrilling, peopled with life-size puppets and miniature houses set aflame. My mom, who was with me, arrived at the performance an entrenched puppetry skeptic and emerged a convert.

Such is the extraordinary force of the work of Yngvild Aspeli, whose show “Chambre Noire” — based on the life of the radical feminist Valerie Solanas, who shot Andy Warhol — was a high point of the Public Theater’s Under the Radar Festival in January. Now New York audiences will get a chance to experience “Ashes,” too — or, like me, eagerly re-encounter it. Inspired by the Norwegian author Gaute Heivoll’s novel “Before I Burn,” it comes to Here in Manhattan for just seven performances, starting on Tuesday, March 12. LAURA COLLINS-HUGHES

Netta Yerushalmy’s “Paramodernities” isn’t so much a set of dances as it is an epic experiment. The six-part series — an enlightening blend of theory and performance — takes a sharp look at works of classic choreography. In other words, she’s exploring more than just the movement. How does each dance relate to aspects of modernism? Where do issues of race and feminism come in? For her extensive project, Yerushalmy has deconstructed works by Vaslav Nijinsky, Martha Graham, Merce Cunningham, Bob Fosse and Alvin Ailey. In the case of George Balanchine’s “Agon,” she offers a response that contains none of the original choreography. Each installment, featuring dancers and scholars ranging in age from 20 to 68, includes text to give the works deeper meaning. Of course, such an artistic enterprise takes time: Yerushalmy’s examination of the modern canon clocks in at around four hours. Refreshments are included. GIA KOURLAS

Film: A Burning Love in ‘Ash Is Purest White’

In films like “Mountains May Depart” and “A Touch of Sin,” the director Jia Zhangke has charted the dizzying transformation of modern-day China, skipping across decades into a future of his imagination. And he’s at it again in “Ash Is Purest White,” a contender last year for the Palme d’Or at Cannes that opens on Friday, March 15, in New York, Los Angeles and San Francisco.

Set between 2001 and 2018, “Ash” — half gangster saga, half melodrama — chronicles the relationship between Qiao (Zhao Tao, Jia’s wife), a spirited beauty from a decaying coal-mining town, and Bin (Liao Fan), a low-level mobster who spends his days gambling in a mah-jongg den and his nights dancing to the Village People’s “Y.M.C.A.”

Qiao’s resilience is put to the test when a motorcycle gang attacks Bin. She saves his life by firing an illegal handgun into the air and lands in jail for five years. When Qiao is finally released, Bin has moved on. And all she wants is for him to tell her why. KATHRYN SHATTUCK

A little over 30 years ago, when the up-and-coming violinist Anne-Sophie Mutter made her debut at Carnegie Hall, the program promoted the event with the phrase “Just as diamonds are forever, so are the art and appeal of Anne-Sophie Mutter.” The tagline, if a bit cloying, was not inaccurate. This Tuesday, Mutter returns to Carnegie for a recital not long after having won the major Polar Music Prize, which she shares this year with Grandmaster Flash.

The hip-hop pioneer and the German violinist should make for an unusual pairing when they receive the prize, before members of the Swedish royal family, in June. But for now, at Carnegie, she is paired with her longtime collaborative pianist Lambert Orkis — with whom she also played in that 1988 debut recital — for a program of sonatas by Mozart, Debussy and Poulenc as well as the world premiere of a new trio by Sebastian Currier that also features the cellist Daniel Müller-Schott. WILLIAM ROBIN

Pop: Fleetwood Mac Is Back at the Garden

These Rock and Roll Hall of Famers are making two stops at Madison Square Garden on the homestretch of the American portion of their 85-date world tour. “An Evening with Fleetwood Mac,” which has no opening act, will consist of an extended set that spans the band’s 17-album catalog, not just its best-known releases. These dates will be the band’s first appearances in the city since the dispute that led to the expulsion of the lead singer and guitarist Lindsey Buckingham in early 2018. Performing with Christine McVie, John McVie, Mick Fleetwood and Stevie Nicks in place of Buckingham will be Mike Campbell, formerly of Tom Petty and the Heartbreakers, and Neil Finn, once the Crowded House frontman. NATALIE WEINER

The Brooklyn-based artist Sara Cwynar uses the appealing colors and slick design of print advertising to give her photographs a sunny kind of self-awareness: You know you’re being manipulated, but you don’t necessarily care. In one series, she poses a female model with a severe expression against different colored backdrops and then partially obscures her with other photographs, as if documenting the model’s reaction to her own objectification. This photographic series and others are part of “Sara Cwynar: Image Model Muse” at the Milwaukee Art Museum. In “Rose Gold,” 2017, one of three videos in this, Cwynar’s first solo museum show, she uses a philosophically informed, diaristic approach to track Apple’s adoption of rose gold, a tint favored in Asian markets. WILL HEINRICH