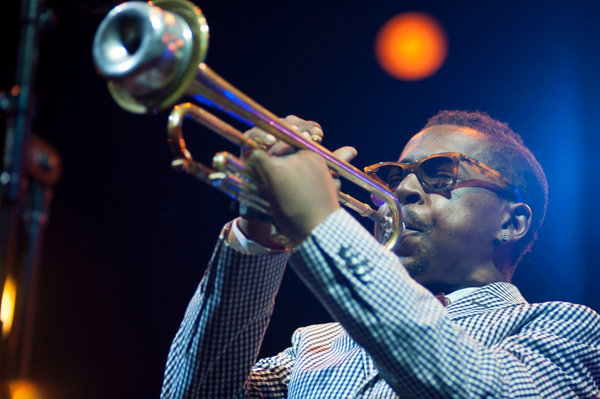 As a part of what’s been called jazz’s “neoclassical” period, the virtuoso trumpeter Roy Hargrove won acclaim as a formidable standards improvisor in the hard-bop mode. But while Hargrove, who died at age 49 late last year, remained deeply rooted in jazz, he also anticipated the contemporary landscape of blurred musical genres, through his leadership of the electroacoustic ensemble the RH Factor and collaborations with D’Angelo, Erykah Badu and Common.

Fittingly, given this dual legacy, the trumpeter’s contributions are being honored both uptown and down. On Tuesday, more than 40 artists will celebrate his life during a star-studded free concert memorial at Jazz at Lincoln Center. And on Saturday, the Roots’ James Poyser will lead a tribute at Bowery Ballroom as part of the Winter Jazzfest marathon that will also feature the vocalist Bilal, as well as members of Hargrove’s quintet. NATALIE WEINER

The tap dancer and choreographer Caleb Teicher is on a roll. His exuberant “Bzzz,” a sonically sophisticated collaboration with the beat boxer Chris Celiz, was a hit at New York City Center’s Fall for Dance festival in October. And his latest work, “More Forever,” drew critical acclaim after its recent preview at the Guggenheim Museum’s Works & Process series.

Created with the pianist and composer Conrad Tao, “More Forever” now returns to the Guggenheim for its official premiere. With his free-spirited warmth and impeccable rhythm, Teicher first garnered attention as a dancer with the celebrated tap artist Michelle Dorrance. In works for his own ensemble, Caleb Teicher & Co., he shares her knack for percussive invention and moving bodies through space in eye-catching ways. To Tao’s score for piano and electronics, “More Forever” experiments with sources of sound, exploring American dance traditions like tap, jazz and Lindy Hop on a sand-covered stage. SIOBHAN BURKE

The Prototype Festival, held each January, is a proving ground for audacious new opera and music theater. Overseen by Beth Morrison Projects and the theater collective Here, the 12 works put on by Prototype this week unfold across New York and explore themes as varied as clinical depression, family ties, capital punishment and the legacy of Pancho Villa.

Among such intense offerings, one highlight is “prism,” composed by Ellen Reid, with a libretto by Roxie Perkins and direction by James Darrah. Staged at La MaMa in Manhattan, “prism” is Reid’s first opera, but her well-wrought music has been engaging with smart dramatic ideas for some time: She wrote a few of the most compelling scenes in “Hopscotch,” the car-based experimental opera that sprawled across Los Angeles in 2015. When “prism,” a harrowing examination of the aftermath of sexual assault, debuted last November, The Los Angeles Times declared that “Reid, in a word, has arrived.” WILLIAM ROBIN

Freeform knows that a girl’s got to take flight sometime. The network welcomed Yara Shahidi into its world with “grown-ish,” which followed her character, the too-cool-for-school Zoey Johnson from ABC’s “black-ish,” as she stumbled through life as a college freshman. (Season 2, in which Zoey is determined to make her sophomore “sequel” better, began Jan. 2.)

Now Freeform is spinning off two characters of its own: Callie (Maia Mitchell) and Mariana (Cierra Ramirez), part of the adopted clan at the heart of “The Fosters,” which ended in June (and offered a glimpse of the future with a series of flash-forwards).

Their new series, “Good Trouble,” starting Tuesday, Jan. 8, picks up five years later in Los Angeles, where Callie, a recent law-school graduate, is clerking for a conservative judge, and Mariana has entered the male-dominated tech world. Together, they’ve landed the kind of dilapidated apartment with fabulous bones known only to first-time renters in Televisionland. Which could mean roommates. The more, the un-merrier.

Between the Battle of Sekigahara in 1600 and the 1868 Meiji Restoration, Japan was unified and at peace under the Tokugawa Shogunate. Popular arts flourished, and, though the country was officially closed for most of the period, foreign influences did trickle in.

“The Poetry of Nature: Edo Paintings from the Fishbein-Bender Collection,” which you can catch for just a few more weeks at the Metropolitan Museum of Art, offers two ink paintings by Mori Sosen that are inflected with Western anatomical realism to mesmerizing effect. Ghostly black and white feathers in “Silkies” make seven chickens look as if they’re trembling, and the evanescent “Stag Amidst Autumn Flowers” is a delicate creature pinned in place by pointy leaves. WILL HEINRICH

Cathartic though it was, taking an ax to the principal’s car was not the wisest expression of rage. But it’s the one that Alison chose, and in the sprawling new play “Blue Ridge” — written by Abby Rosebrock (“Dido of Idaho”) and directed by Taibi Magar (“Is God Is”) — her violence has landed her in a halfway house somewhere in southern Appalachia.

Played by Marin Ireland, a masterly portrayer of tough and troubled women (“Ironbound,” “Kill Floor”), Alison is a likable mess of an English teacher trying to piece her life back together. Her destructive romance with the principal, her boss, endowed her with a sharply tuned radar for exploitative men, and she has zero tolerance when she senses a predator in the group home.

A tragicomic ensemble piece that makes some vivid insights into sexual degradation, calculated abuse of power and justified female fury, “Blue Ridge” is in previews for an opening on Monday, Jan. 7, at Atlantic Theater Company in Manhattan. LAURA COLLINS-HUGHES

In 1985, the Japanese filmmakers Isao Takahata and Hayao Miyazaki founded the now-iconic Studio Ghibli, creating dreamy fairy tales like “Ponyo,” “Princess Mononoke” and “Spirited Away,” the last of which won an Oscar for best animated feature in 2003 after Disney released an English version.

Miyazaki, who wrote and directed each of those films, grew to international acclaim. But the less prolific of the two, Takahata, who died in April, claimed his own legion of admirers with “Grave of the Fireflies” (1988). Its animation innocent (the light from those fireflies!) and message heart-rending, the haunting tale — based on a semi-autobiographical story by Akiyuki Nosaka — follows a teenage boy and his younger sister as they try to survive the firebombing of Japan by American forces during World War II.

On Friday, Jan. 4, the Quad Cinema is giving Takahata’s masterpiece its New York theatrical premiere. Those unable to savor the experience on the big screen can find “Grave of the Fireflies” on iTunes. KATHRYN SHATTUCK