If you grew up thinking of Handel’s “Messiah” as a sweet, staid pageant, a holiday ritual involving a little nap and a stand-and-deliver “Hallelujah” chorus, the forces of Trinity Wall Street offer the gritty, fearless cure, from Dec. 13-17, with what stands apart as New York’s best. (The Dec. 16 performance will be webcast live at 3 p.m., then available on demand.)

“We want to touch people,” Julian Wachner, Trinity’s director of music and the arts and the conductor of its “Messiah,” said in a recent phone conversation. “We want it to not be your grandmother’s ‘Messiah.’”

That desire can be a cliché — after all, no one says they want to perform your grandmother’s “Messiah” — but Trinity, more than anyone else, actually makes it happen, expanding your sense of what the piece can be and do.

[Read more about some of this year’s holiday-themed events.]

I remember my first encounter with the annual Trinity presentation, in 2011. Most takes on “Messiah” have settled into a pattern: A chorus is joined by a quartet of soloists — often fancy opera singers — who trade off Handel’s gorgeous arias. But Trinity drew its soloists, more than a dozen of them, from the ranks of its own choir.

Immediately a formal concert became a collective rite. Not all of those soloists were perfectly polished, but there was something affecting about the bits of roughness. The arias were transformed beyond the usual displays of sumptuous vocalism; they were urgent, even desperate communication.

The choir included male altos, with a whiteish, trumpeting tone; the Trinity Baroque Orchestra was composed of period instruments, with a reedy tang. Dense yet airy, with biting diction and dramatic dynamic shadings, the Trinity choir sang a furious “Surely he hath borne our griefs” and an “All we like sheep have gone astray” of rollicking, almost celebratory intensity, egged on by a muscular, unrelenting orchestra.

“We’re very much believing it’s Baroque music,” Mr. Wachner said. “There’s dance, there’s energy to it. There’s not this sense that you do one movement, wipe your brow, turn your page, and do the next movement. Opera was the basis of everything that Handel knew, and oratorio was a development through that.” 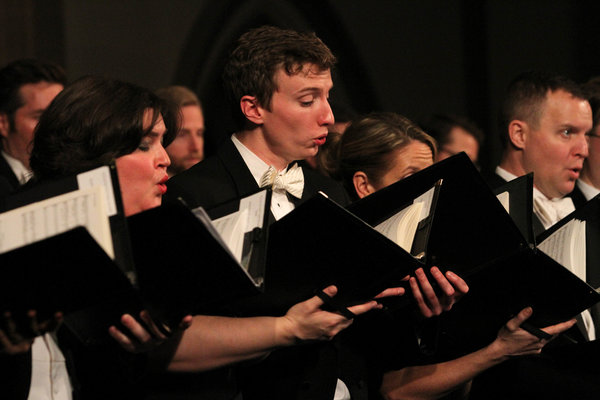 Trinity continues to experiment with its performance. Last year, Mr. Wachner switched the traditional genders of all the solos, inspired by the strengths of the roster he had at the time. (Imagine a bass singing “He was despised,” traditionally taken by a female alto.)

There was, Mr. Wachner admitted, a bunch of hate mail in the aftermath, but also a lot of responses that spoke of how special the experience had been and how much it revealed about the score. This year, some but not all of the assignments will be gender-switched, for a version neither fully experimental nor fully traditional.

Perhaps even more important, while Trinity Church is closed for two years of renovations, “Messiah” will be performed in the far more intimate St. Paul’s Chapel. “Trinity elicits hushed tones,” Mr. Wachner said. “There is a separation, like at Carnegie Hall. At St. Paul’s, it’s more of a communal feeling.” This fresh location promises to emphasize what is most memorable about Trinity’s presentation: its visceral drama and elemental energy.

As it happens, Mr. Wachner was first exposed to “Messiah” as a boy chorister at St. Thomas Church Fifth Avenue, which often is the first high-profile performance of each holiday season (this year, Dec. 6) and sets a generally high, graceful standard for the weeks that follow.

• After practicing a few weeks ago with a program of early music — including Handel’s “Water Music” — under the baton of Emmanuelle Haïm, the New York Philharmonic is turning to another Baroque specialist, the conductor Jonathan Cohen, for “Messiah” this year (Dec. 11-15).

The instruments will, of course, be modern, but the orchestral forces are likely to be substantially reduced from full symphonic strength and vibrato, one assumes, will be at a minimum. The quartet of soloists includes the countertenor Anthony Roth Costanzo, fresh from a series of ambitious staged performances juxtaposing works by Philip Glass and, happily, Handel.

The Philharmonic will be joined by the Westminster Symphonic Choir, which also does the piece (through Dec. 9) with the Philadelphia Orchestra and its music director, Yannick Nézet-Séguin, who just made his debut in the same position with the Metropolitan Opera and who leads a notably sensitive “Messiah,” operatic without being overblown. 212-875-5656, nyphil.org; 215-893-1999, philorch.org

• Masterwork Chorus, one of the amateur groups that dominated the “Messiah” scene a few decades ago, brings the work to Carnegie Hall on Dec. 20. Also at Carnegie, Kent Tritle leads the 200-voice Oratorio Society of New York (Dec. 17) and, not long after, the far smaller Musica Sacra (Dec. 19). 212-247-7800, carnegiehall.org