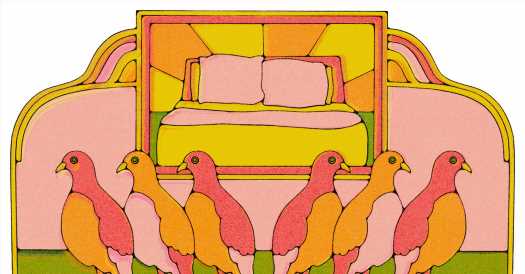 Welcome. Last week I wrote about returning to the movies and how, even more so than seeing a film on the big screen, it was thrilling to be in a crowd of people, responding to the on-screen together. I called it “communal emotion,” but was delighted to learn that there’s another term for it, coined by the French sociologist Émile Durkheim in the early 20th century: “collective effervescence.” As the organizational psychologist Adam Grant recently explained in a guest essay for the Sunday Review, the term refers to “the sense of energy and harmony people feel when they come together in a group around a shared purpose.” Check out Grant’s piece, if you have a few minutes.

I asked about those small, specific things, like laughing with strangers in movie theaters, you’ve been surprised lately to discover that you missed. So many of the responses cited instances of collective effervescence.

A few weeks ago I took my niece to visit Storm King Art Center. When we got to the parking lot, people from other cars were getting out and readying themselves to walk through the park. I couldn’t help but say out loud, “Wow, this is amazing! I’ve really missed people. SO glad to be here!” They all smiled and shared the same sentiment. Later, we went to a pizza place and exchanged greetings and light banter with the owners. I’ve missed just being around other humans, being friendly, saying hello and doing it all without a mask. For so many months, fear has driven me to keep to myself — fear of the virus and also of anti-Asian racism. It was a gift to no longer be fearful (albeit still cautious) and to be among my fellow humans. —Elena Yee, Poughkeepsie, N.Y.

Now that I’m fully vaccinated and no longer need to mask, I can wear lipstick in public again. Over the holiday weekend, I had multiple people tell me that they liked my lip color. What a lovely positive affirmation! Not something I thought I was missing out on, but a delight to experience again. —Norah Blackaller, Downers Grove, Ill.

Last summer, the swimming area at my local pond was closed because of health and overcrowding concerns. This year, it’s open again, but I still feel the need to avoid crowds. I’ve been getting up at 5:30 every morning, rain or shine, to take a dip before work. I make one cup of strong black coffee, grab my towel and go. I’m in the water by 6 most mornings, swim for about 20 minutes and then get out and head home to get ready for work. I find that even this small time to myself every morning helps me get through whatever challenges the day brings. —Michael Tucker, Bath, Maine

When the first lockdown in my country was announced, I thought that my college would be the thing I’d miss the most. However, unexpectedly, my metro rides to college became the activity I missed the most. Bumping into your friends out of the blue, watching people do silly things on the metro, watching the city buildings and landscapes, randomly talking to a stranger, helping someone with routes and exploring new routes made me happy. —Gorvi Sajnani, New Delhi

On a Saturday night a couple of weeks ago, driving with another couple into NYC to have dinner, we found ourselves in a slow crawl on the helix to the Lincoln Tunnel, and major traffic after that: An hour-and-fifteen-minute drive turned into a two-and-a-half-hour drive. With memories of a deserted Times Square and city streets seared into my brain, the traffic and the crowds never looked so good. —Bonnie Schultz, Princeton, N.J.

If you spent a lot of time watching television during 2020, you might have been cheered to see some of your favorites receive Emmy nominations yesterday. Here are our critics responding to the selections, and here’s a look at the surprises and snubs. We spoke to many of the nominees, including Elizabeth Olsen, Billy Porter, Kate Winslet and Cynthia Erivo. The awards will be broadcast on Sunday, Sept. 19, at 8 p.m. Eastern on CBS and Paramount+, if you want to start planning a get-together now.

If your social interactions have felt more flat than bubbly, you’re not alone. Alex Abad-Santos spoke to a psychology professor about why “The pandemic has made small talk even more painful” for Vox. (Blame Zoom, at least partially.)

As the LP turns 50, check out the music that influenced and was influenced by Funkadelic’s “Maggot Brain.”

Sufjan Stevens and Angelo De Augustine’s new single, “Reach Out,” is loosely inspired by Wim Wenders’s 1987 film “Wings of Desire.” The video features the musicians’ dogs and is quite soothing.

Have you experienced moments of collective effervescence recently? Tell us about it: [email protected] Include your full name and location and we might feature your story in a future newsletter. We’re At Home and Away. We’ll read every letter sent. More ideas for leading a full and cultured life, whether you’re at home or away, appear below.

There’s more to read, do and watch in our archive. Let us know what you think.