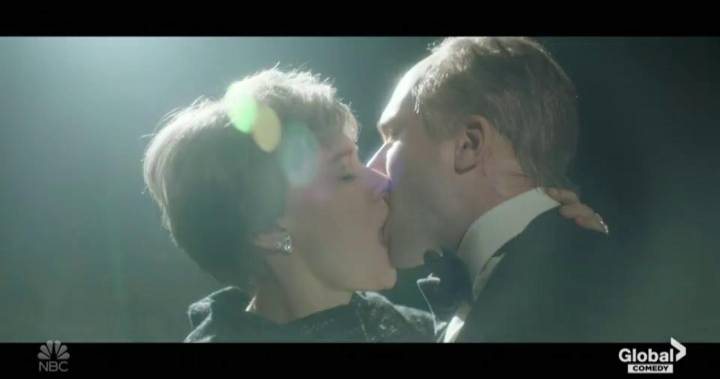 The ongoing woes U.K. Prime Minister Theresa May faces in negotiating Brexit were mocked in a dream sequence on Saturday Night Live, ending with a kiss between her and Winston Churchill.

Kate McKinnon’s May is found flipping through multiple news stories and interviews scrutinizing the embattled prime minister’s Brexit talks before eventually turning the television off, only to be confronted with her own reflection.

To the tune of “She Used to be Mine” from the Broadway musical “Waitress,” performed by musical guest Sara Bareilles, May takes to the streets of London, only to be greeted with stern looks, thumbs down from children and even the middle finger by two members of the Queen’s Guard.

May has become embattled over the negotiations, with her deal having been rejected by Parliament three times.

When she tries to eat, a bird defecates on her meal, and she even sees a butterfly burst into dust on her hand.

While sitting at a park bench, she also tries to search “Theresa May fans,” only to be given zero results.

Eventually, she passes by a window with a portrait of former prime minister Winston Churchill, which transitions to the pair dancing, before the two kiss.

May then imagines herself entering Parliament and telling Labour Party leader Jeremy Corbyn she knows what to do for Brexit, only to be told MPs had agreed on her deal and that she had “saved Britain,” as members cheer and toss paper into the air.

She then wakes up on her sofa, with a reporter on her television saying she was “not in control of this process,” to which she responds, “well, [expletive] you, at least I’m trying.”