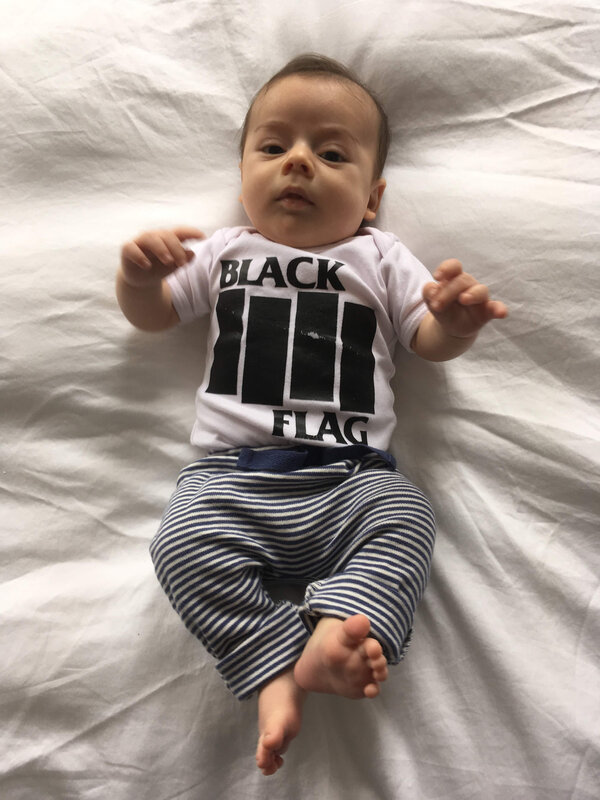 Before my son, Renzo, was born in early 2020, my then-co-worker Emily came to my office with a gift bag. At that point I’d received many generous gifts for the baby, but none of them moved me like this one. I opened the bag and pulled out a onesie featuring the cover art for the Japanese noise musician Merzbow’s classic 1996 album, “Pulse Demon.” I nearly cried. As a music obsessive, I felt understood.

It soon occurred to me, though, that I might have been shoving some of my own desire to be perceived as cool via my obscure taste onto my child. Some years ago, The Onion published an article with the headline “Cool Dad Raising Daughter On Media That Will Put Her Entirely Out Of Touch With Her Generation.” In the accompanying photo, he’s smiling as she reluctantly holds a Talking Heads LP. Rereading the satirical piece with the “Pulse Demon” onesie in mind struck a little too close to home.

As a short, bald man relatively uncomfortable in my body until recent years, I have leaned into the adage that clothes make the man. That also means its inverse, that if your clothes aren’t too distinct, they won’t speak for you. For the past decade or so it’s meant wearing plain stuff, loose fits and washed-out colors — a blank canvas that my personality can fill in (minus my slight obsession with sludge metal-band tees).

Ideally, I’ll allow my son to have the same freedom to decide who he is and how he would like to present himself to the world. But as a baby, he has both no agency to do that, and just the most nascent of personalities for me to go off. So while it seems like a fun idea to have him show off a future love for avant-garde bands, maybe that isn’t the most practical style dictum. But what is?

As a rule, kids’ clothing is ephemeral. It gets spilled on, puked on, pooped on, and only fits for a few months. Needing to change our son so frequently in the beginning of his life, my wife and I were fairly indiscriminate with his clothing choices, grabbing whatever we’d bought, gotten as a hand-me-down or been gifted. That included everything from footie pajamas with alligators, sailor striped pants and various items hand tie-dyed in Vermont by my sister.

Like any first-time parent with a smartphone and social media, we took a lot of photos. He looked like an angel in all of them, of course, but the photos we returned to most were the ones where he was the focus, not his outfit. He was dashing in a mustard-colored pointelle one-piece, or in cornflower-blue pants and a white T-shirt. Over time, though, we began to gravitate toward only buying him clothes with minimal embellishment, then eventually none at all. Now, the biggest pizazz in his wardrobe is stripes.

I know that’s kind of boring. I admire (and follow on Instagram) parents who have fully embraced the slapdash way kids live and synthesize that into their wardrobe with bright colors and a Jackson Pollock-esque approach to pattern. Take for instance Leo, son of Sunny Shokrae, a photographer and the author of a recent children’s book on Farsi. Leo always looks fantastic, wearing black and yellow pants that are checked on one leg and striped on the other, full-on leopard print or a denim jacket with a big ’70s collar.

Leo is not blending in. And he pulls that off because Sunny does, too. She loves color, patterns and stripes; think M.C. Escher gone Day-Glo. “I buy clothes for Leo the way I would buy clothes for myself, and that’s the only way I think I can,” she said. “If I were to buy clothes any other way he’d look like a clown, because I wouldn’t know what I’m doing.”

Perhaps I don’t have enough confidence in my own taste for Renzo to splash out the way Leo and Sunny do, but I’m scared of setting him up for something he doesn’t want to be. Still, looking at their photos, you don’t get the feeling that Leo is upset at his mom’s sense of adventure.

In a way, by eschewing that whimsy in dressing Renzo, what we’ve done is inadvertently baby-ized the uniform approach to dressing that lots of busy, famous and important people like Steve Jobs and Barack Obama have popularized. Mr. Obama typically wore only blue or gray suits during his presidency. “I don’t want to make decisions about what I’m eating or wearing. Because I have too many other decisions to make,” he told Vanity Fair in 2012. That tracks to parenthood, where time is deeply precious and a minute feeling self-conscious about the Merzbow onesie is wasted.

But despite all the consistency in Mr. Obama’s suit colors, the one he’s most remembered for was tan — the single day he decided to step out of his routine. Translated into babydom, does that mean we’re setting Renzo up for wallflower life, destined to be gawked at the moment he tries out some flair? It turns out my wife is already planning for this.

“He can dress a little bit ridiculous,” she said to me. “Ten percent ridiculous is fine.” And so in addition to the muted tones that populate his wardrobe, she’s begun to introduce more clothes with animals on them, more bright colors. He’s pretty quickly taken to a neon-green sun hat. And he loves his Nikes with a red swoosh, asking me to put them on his feet most mornings as soon as he wakes up. If, in the next year or so, when he can more ably dress himself, he chooses to wear only fluorescents, more power to him.

All of this seems nuts to worry about. He’s a baby. He could wear a toga cut out of a paper bag and our main concerns as parents should still be: Is he happy, healthy and safe? We’re lucky enough that the answer to all of those seems to be a consistent yes. So why not think about his appearance? I want to set him up to feel confident when he’s standing in front of the mirror. Anything else is a bad look.

Matthew Schnipper is the director of entertainment at Vice.