These might seem to be natural topics of interest in a country determined to be the world’s leader in science and technology. But in China, where censors are known to take a heavy hand, several artworks that look closely at these breakthroughs have been deemed taboo by local cultural officials.

The works, which raise questions about the social and ethical implications of artificial intelligence and biotechnology, were abruptly pulled last weekend from the coming Guangzhou Triennial on the orders of cultural authorities in the southern Chinese province of Guangdong.

The artists, from Europe, Australia and the United States, were not given an official reason why their works were rejected for the show, which opens on Dec. 21 at the Guangdong Museum of Art. The pieces did not touch on the Tiananmen democracy crackdown of 1989, independence for Taiwan or Tibet or the private wealth of Chinese Communist Party leaders — topics that are widely known to be off-limits for public discussion in China.

As a result, some of the show’s curators and the affected artists have been left guessing as to why the works were banned. Their conclusion? The works were perhaps too timely, too relevant and therefore too discomforting for Chinese officials.

“The news is really filled with concern about the gene editing of babies,” said Heather Dewey-Hagborg, an American artist whose work “T3511” was among those pulled from the show. “It definitely seems like a moment where I can imagine that art or any kind of content that deals with biotechnological futures and some of the vulnerabilities and the dark side of those futures might seem to be dangerous.”

Ms. Dewey-Hagborg was referring to the explosive revelation last month that the Chinese scientist He Jiankui said he had created the world’s first genetically edited babies. Following the announcement, scientists in China and abroad condemned Dr. He’s conduct, calling it reckless and unethical.

Against that background, a work like “T3511” by Ms. Dewey-Hagborg with Toshiaki Ozawa would seem to be especially timely. The four-channel video tells the fictional story of a biohacker who becomes obsessed with an anonymous donor whose saliva she purchases online. By analyzing the DNA in the saliva and using a genealogy website, the biohacker is able to identify the anonymous donor. According to Ms. Dewey-Hagborg, the video is intended to raise questions about biological commodification, privacy and bioethics.

But in China, where officials are often incentivized to err on the side of caution and prioritize social stability above all else, stirring up public debate with hard-hitting questions about ethics is not always a welcome endeavor.

Angelique Spaninks, director of MU, an independent art space in the Netherlands, and one of the curators of the Guangzhou Triennial, said, “The privacy stuff even makes me uncomfortable and of course the work is a very strong piece because of that.” But anything that creates discomfort, she said, “makes officials here nervous.”

The other banned works include “The Modular Body,” an online science fiction story about using human cells and artificial organs to create a living organism. Created by a Dutch artist, Floris Kaayk, the work is intended to raise questions about the potential for 3-D printing of human organs, about extending life with the help of technology and about the desire to design life from scratch.

Also pulled from the show was “im here to learn so :))))))” by Zach Blas and Jemima Wyman, a four-channel video that resurrects Tay, an artificial intelligence bot created by Microsoft in 2016 that was shut down in less than a day after users trained it to be a bigot. According to Mr. Blas, museum officials in China had initially asked to cut two lines in the video (an obscenity and a reference to Adolf Hitler) before cultural authorities decided ultimately to reject the entire work, which also deals with issues of feminism. 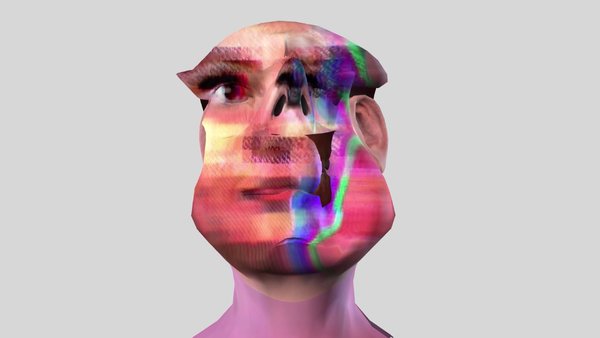 A work by the artist Lawrence Lek, from London, was also pulled from the show, as was part of a multichannel video work by Harun Farocki, a filmmaker who died in 2014, according to curators.

Huang Yaqun, the deputy director of academic affairs at the Guangdong Museum of Art, a state-backed museum and the host of the triennial, said that the decision to cut the works was based in part on their “incompatibility with the Guangdong people’s taste and cultural habits.”

Though some were caught off-guard by the last-minute decision to pull works from the triennial, such setbacks are a frequent occurrence for many in China’s art circles when dealing with the country’s often unpredictable censorship review process.

Contrary to the notion of China’s censorship apparatus as an all-powerful monolith, the effort to get an exhibition past cultural officials is often a constant negotiation and balancing act that can depend on factors including which authorities are in charge and what the local situation is. Exhibition organizers are often forced to come up with clever strategies to circumvent or assuage censors by, for example, showing a work without explanatory text or putting age restrictions on access to a show.

“Usually, they reject work mentioning political or internal affairs or nudity,” said Victoria Jonathan, art director of Jimei x Arles International Photo Festival, which is held every year in the southern Chinese city of Xiamen and is a partner of the annual Rencontres de la Photographie d’Arles. “Sometimes they object to something because it’s related to the news. And sometimes their decision just doesn’t make sense at all.”

China is not alone in pulling images that it deems potentially disturbing. Last year, the Guggenheim Museum removed three works by Chinese artists from a highly anticipated exhibition — including one featuring pit bulls on treadmills — after pressure from animal-rights supporters and others over the show, “Art and China After 1989: Theater of the World.” Some critics said the Guggenheim should have used the controversy as a moment to engage the public about difficult art.

Though Ms. Spaninks, the Guangzhou Triennial’s curator, said she was disappointed with the decision to pull the current works, she was hopeful that the remaining pieces in the show, which is titled “As We May Think: Feedforward,” could still trigger debate about the future of science and technology. Assuming no further cuts are made to the show, the exhibition, which runs until March 10, will feature more than 40 artists including Lynn Hershman Leeson, Wang Yuyang and Tega Brain.

Still, Mr. Kaayk, who said he had spent months preparing “The Modular Body” for the show, only to find out at the last minute that it had been banned, said in an email that he felt “very frustrated.”