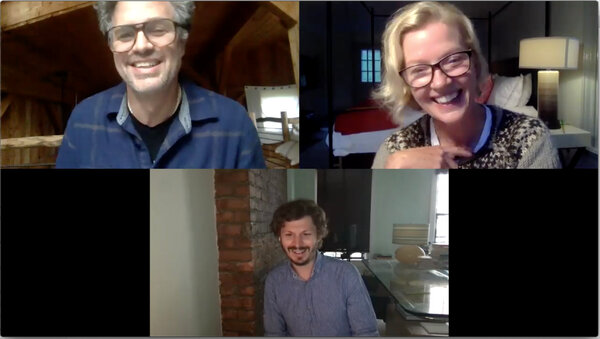 Much of the theater made since the pandemic has been on Zoom, but surprisingly the behaviors induced by the platform itself have been underexplored. Enter Natalie Margolin’s goofy, eye-opening — and hopefully not overly prescient — play “The Party Hop.”

Set “three years into quarantine,” the comedy, which Dramatists Play Service is streaming on YouTube through Nov. 10, follows three college students on a wild night out. They share chocolates, do a few rounds of “Never Have I Ever,” drink, dance and, for one of them, try to land a first kiss. And they do it all on Zoom.

“She might be the kind of person that arrives and changes her background for attention,” Ava (Beanie Feldstein) warily says of the transfer student Nancy (a hilarious, scene-stealing Catherine Cohen). Oh, but she is, Ava, she is.

The ensemble, which also includes Ben Platt, Ayo Edebiri, Kaitlyn Dever and Ashley Park, is crackerjack, but it’s Margolin’s setup that makes the most lasting impression: Life, and theater, could be online for quite a while, so let’s make the most of the situation.

Here are a few other initiatives with a similar attitude, from left-field casting to virtual shows by international companies that might not be able to travel for some time. Let’s go for it all, they seem to say — what do we have to lose? 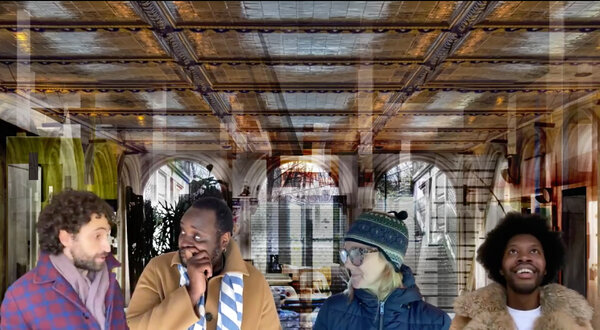 Glenn Close as Roy Cohn. Lois Smith and Vella Lovell as the hallucinating housewife Harper Pitt. Linda Emond, Nikki M. James, Patti LuPone and Daphne Rubin-Vega as a composite angel. There is inventive casting, and then there is “The Great Work Begins: Scenes from ‘Angels in America,’ ” in which these actors and more take on roles they might never have landed in physical productions of Tony Kushner’s two-part epic. (Oct. 8-12; thegreatworkbegins.org.)

As physical stagings gingerly resume, Northern Stage, in White River Junction, Vt., is mixing them up with online availability. This month, for example, Stephanie Everett performs her solo “I’m Fine, I’m Fine” in person, Oct. 7-25, before it goes online, Oct. 22-Nov. 29. Anybody can watch a stream of Greg Keller’s two-hander “Dutch Masters,” Oct. 8-21. Recorded back in September, the actors John Kroft and Nuri Hazzard traveled from New York and quarantined before sharing a physical stage, but no audience. (northernstage.org)

In their own words

The Brooklyn Academy of Music is partnering with institutions across the country to present “That Kindness” as a web offering. The playwright and performer known as V, formerly Eve Ensler, interviewed nurses and assembled their stories into a collagelike play, with help from James Lecesne (“The Trevor Project”). The cast includes Connie Britton, Billy Porter, LaChanze, Rosie O’Donnell, Rosario Dawson and Marisa Tomei, among others. (Oct. 15 at 7 p.m., through Oct. 18; bam.org.)

Over in Britain, Original Theater Online is presenting Torben Betts’s “Apollo 13: The Dark Side of the Moon.” The playwright used NASA transcripts from the mission that came close to disaster in 1970, balancing those scenes with fictional elements. (Oct. 8-Dec. 31; originaltheatreonline.com.)

The National Theater of Scotland has enlisted a diverse group of writers, directors and actors for its “Scenes for Survival.” Some of those short pieces are stand-alones, others excerpts from longer works (a slice of Irvine Welsh’s “Trainspotting” is performed in sign language). Highlights include Mark Bonnar in the Rob Drummond monologue “Larchview” and the dryly funny “Ian and Sheena,” about a bumbling amateur theater company. Happily, Scottish crime writers are represented: look for Val McDermid (“First Things”); Ian Rankin (the new Rebus story “The Lockdown Blues,” with Brian Cox); and Denise Mina (the funny “Aleister Crowley Summons the Devil”). (Nationaltheatrescotland.com.)

The most famous Scotland-set play of all, however, remains “Macbeth,” which gets a virtual immersive treatment from the Big Telly Theater Company. The start of the run anchors the Belfast International Arts Festival, then the production is hosted by the Creation Theater. (Oct. 14-31; big-telly.com.)

Mark Ruffalo and Michael Cera are fluent Kenneth Lonergan whisperers, so it’s exciting to see them lined up for a reading of the playwright’s wonderful “Hold On to Me Darling.” Ruffalo takes on the central role of the narcissistic country star Strings McCrane — that name! — who was memorably portrayed by Timothy Olyphant in the 2016 Off Broadway premiere. Be warned that this may test your virtual endurance as the play runs almost three hours. (Oct. 11 at 7 p.m., through Oct. 14; www.in.live/ruffalo.)

Melissa Errico is an exquisite singer who enjoys deep dives into her material, whether it’s by Michel Legrand or Stephen Sondheim. Now she teams up with The New Yorker writer Adam Gopnik for “Love, Desire and Mystery — Il Parle, Elle Chante,” a trio of livestreams from Florence Gould Hall in Manhattan. The first installment will include a new song by Gopnik and David Shire from their work-in-progress musical about Eleanor of Aquitaine — whose life in 12th-century Europe could fill at least three shows. (Oct. 14 at 7 p.m.; fiaf.org.)

If arty and subtitled is your jam, the Jersey City Theater Center’s Voices International Theater Festival presents productions (some prerecorded, some livestreamed) representing 20 countries. An upside of the pandemic is that we can now discover work by small companies that might not have traveled to the U.S. (Oct. 16-25; jctcenter.org.)

Will “Sticks & Stones,” which uses the story of David and Goliath to address teen bullying, join the elite ranks of hit musicals inspired by the Bible? The online concert premiere of John McDaniel and Scott Logsdon’s show has enlisted quite the cast: Audra McDonald, Javier Muñoz, George Salazar, the “Newsies” and “Les Mi” alum Joshua Colley as the boy with the sling and a very large ensemble that makes some of us ponder what Cecil B. DeMille would have made of Zoom. (Oct. 16-20; broadwaycares.org.)