Productions from the multidisciplinary Manchester International Festival often end up traveling around the world, making pit stops at well-heeled performing arts centers. This year, we don’t have to wait, as the festival is making some of its offerings available online — an approach we hope will become commonplace among international gatherings.

Of particular interest to theater audiences is “Notes on Grief,” Rae McKen’s adaptation of Chimamanda Ngozi Adichie’s essay-turned-book about her father’s sudden death. The show is bound to be compared to the Joan Didion memoir-turned-play “The Year of Magical Thinking.”

One day in June 2020, Adichie learned that her father — with whom she had chatted just a day earlier — died. “My brother Chuks called to tell me, and I came undone,” she wrote in an essay that The New Yorker published in September. McKen’s show stars Uche Abuah, Michelle Asante and Itoya Osagiede. Audience members lucky enough to be in Manchester can see it in real life through July 17, and the rest of us can watch from home from July 15-18. mif.co.uk.

‘Our Little Lives: Shakespeare and Me’

Those who associate Russell Brand only with his excesses and shock tactics may be surprised by his quieter mien these days — he’s become the kind of guy who occasionally finds life lessons in sonnets. He is now reprising a one-man show he conceived with the director Ian Rickson and developed in 2018, in which he uses Shakespeare’s writings to illuminate his own story. Brand promises an appearance by his dog, Bear (perhaps timed to his exit, so he can be pursued by Bear). Through July 14; live-now.com

‘A Gentleman’s Guide to Love and Murder’

CollaborAzian is streaming an abridged version of this Tony Award-winning musical from 2013 with an all-Asian American cast and production team. Karl Josef Co takes on Monty Navarro, who sets out to kill multiple members of the D’Ysquith family, all of them to be portrayed — often in lightning-fast succession — by Thom Sesma. It should be interesting to see how the director Alan Muraoka and his actors handle the show’s high-farcical style online. Look also for a special appearance by Lea Salonga. July 15-22; collaborazian.com

Last year, Studio Theater presented the Chicago playwright Ike Holter’s anthology of vignettes as an audio drama; now the Goodman Theater is producing it as a fully staged livestream, directed by Lili-Anne Brown. The stories cover various aspects of life during the peak of the pandemic year, touching on Covid-19, racism and activism, and possibly even hope. July 15-18; goodmantheatre.org

Presented by various institutions and organizations across the country, including the Foundry Theater in New York, this two-day event is anchored by a streaming presentation of the Milo Rau film “The New Gospel.” Rau, an audacious Swiss director whose production company “for theater, film and social sculpture” is called the International Institute of Political Murder, set the Passion of Christ in the context of 21st-century conflicts about migration; the Jesus character is played by the activist and writer Yvan Sagnet, who was born in Cameroon and then later moved to Italy to study. Rau will also participate in a couple of panels: “How are artists seizing power today?” and “How are artists and organizers building solidarity between art and movements?” (Sagnet will participate in the latter one as well). July 9-10; howlround.com

‘Lines in the Dust’

Nikkole Salter emerged in 2005 with the play “In the Continuum,” which she and Danai Gurira wrote and starred in. Since then, Salter continues to make theater that inspires and engages, stirs and advocates. The New Normal Rep company is reviving her 2014 play “Lines in the Dust,” in which a working-class New Jersey mother alters her residency paperwork so her daughter can attend a good school. July 8-Aug. 8; https://www.newnormalrep.org/next-up 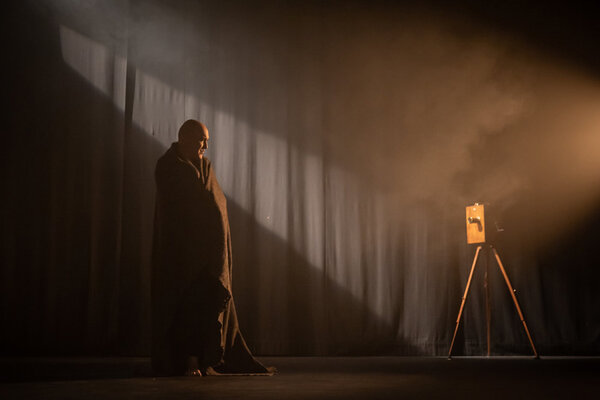 The respected Dublin company Fishamble celebrates the 10th anniversary of one of its biggest hits, “Silent,” from the writer-performer Pat Kinevane, with a virtual American mini-tour of a filmed version: It’s presented first by Odyssey Theater Ensemble in Los Angeles (July 9-11) then by Solas Nua in Washington (July 11-18). Kinevane portrays a mentally ill homeless man who emulates the silent movie star Rudolph Valentino. Praising “Silent” in The New York Times, Ben Brantley wrote that “there is breath and blood to spare in this carefully wrought production.” fishamble.com

The explosion of streaming theater last year allowed us to discover many artists doing stellar work in their corners of the world. One such outfit is Britain’s Imitating the Dog, whose shows make inventive use of multimedia techniques and translate remarkably well online. Luckily the company remains proactive in making its catalog available. Check out, for example, “Dr Blood’s Old Travelling Show,” from October 2020, or the collection of shorts “Street,” which smartly spruces up the aesthetics of documentary theater. http://www.imitatingthedog.co.uk/at-home/

Red Bull Theater, in New York, has made a name with such zippy revivals as “The Government Inspector,” which gave Michael Urie a golden opportunity to display his comic timing, but the company is not stuck in the past. For this year’s edition of its festival dedicated to short new plays, Red Bull commissioned a work from José Rivera (“Cloud Tectonics” and the Academy Award-nominated screenplay for “The Motorcycle Diaries”) and selected six entries from hundreds of open submissions. The winning playwrights are Constance Congdon, Rosslyn Cornejo, George LaVigne, David Lefkowitz, Abigail C. Onwunali and Charlotte Rahn-Lee, and their pieces should be in good hands with the directors Margot Bordelon and Timothy Douglas. July 12-16; redbulltheater.com

The Welsh writer and performer Shôn Dale-Jones’s new solo show has been compared to Bo Burnham’s Netflix special “Inside”: both are autobiographical works that explore lockdown life while occasionally reaching further back in time. Dale-Jones refers to digital interactions he’s had in the past year, including WhatsApp group chats and Zoom calls, and includes tough discussions about his mother’s mental well-being. After a livestreamed run, the National Theater Wales production is available on-demand. Through July 13; nationaltheatrewales.org

Every year, 59E59 Theaters in New York presents a showcase of productions headed to the Edinburgh Festival Fringe. While the United States have made great steps toward a return to a theatrical normal (whatever that might be), the new edition of East to Edinburgh is still virtual, with nine shows you can watch from home. Among the titles that caught my eye is Priyanka Shetty’s docu-theater solo “#Charlottesville,” about the events that roiled the Virginia city in August 2017. Borrowing from Anna Deavere Smith, Shetty built her text from interviews. Other intriguing entries in the showcase include “Testament,” in which Tristan Bernays (“Frankenstein”) imagines what would happen if four biblical characters lived now; and Somebody Jones’s “Black Women Dating White Men,” whose title is an apt description of the show. July 15-July 25; 59e59.org