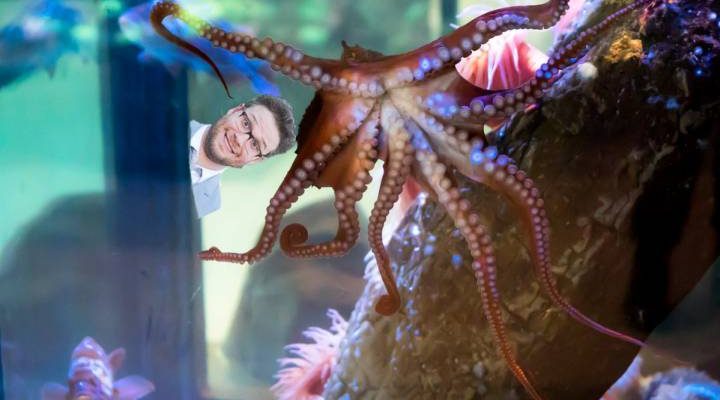 No, not the Vancouver-born Hollywood star who’s become the city’s social media meme of choice over the last year, but a cephalopod living at the Vancouver Aquarium.

The facility announced Friday that its newest Giant Pacific octopus will be named Ceph Rogen, after that moniker defeated the creature’s other possible name, Octavia, in an online poll with more than 90 per cent of the vote.

Seth Rogen, the actor for whom the octopus is punnily named, took to Twitter to celebrate.

Ceph Rogen was collected by the Vancouver Aquarium back in September for the facility’s “cephalopod-in-residence” program.

The one-year-old female replaces a previous Giant Pacific octopus that was released back in March. She, too, will get returned to the waters from which she came around Bowen Island, according to Christine Martinello, Vancouver Aquarium’s assistant curator of fishes.

“We have started a program where we do release our octopuses to the body of water that they came from, so we will eventually release this one before sexual maturity so she can go back and repopulate in the wild,” she said.

Giant Pacific octopuses, which can grow to up to six feet in length, are believed to be one of the largest and longest-living species of octopus in the world, according to the Vancouver Aquarium.

The den-dwelling creatures can change the texture and colour of their skin and are able to squeeze down small enough to slip through any space larger than their beak.

They’re also a hot exhibit for visitors at the aquarium.

“The octopus has always been one of the species that draws people into the aquarium, and now, with the naming contest, it’s going to be really popular,” said Martinello.

The contest win caps a big year for Rogen as a Vancouver icon.

Between July and October, the Point Grey Secondary graduate became ubiquitous as the “guest voice” of Vancouver Transit.

That gig, which Rogen agreed to do for free, was itself the product of a social media interaction — when a local reporter suggested TransLink approach the comedian to voice announcements after dropping Morgan Freeman in the wake of allegations of sexual harassment.

Rogen said he took the job making comedic PSAs about transit etiquette because of his love of his hometown and because he considers himself a regular transit user.