SAN FRANCISCO — Pamela Kramlich clearly didn’t know what she was getting herself into when she bought her first work of video art in 1987. Having seen a deliciously zany video, “The Way Things Go,” by the Swiss artists Peter Fischli and David Weiss, she thought it might provide amusing dinner-party entertainment at her house in the Presidio Heights section of San Francisco.

She telephoned the Sonnabend Gallery in New York to inquire how to obtain it. “That’s easy,” the gallery’s director, Antonio Homem, told her.

She supplied her Mastercard number and a short time later, as she recalls, “a videotape with a funny sticker” arrived in the mail. Produced in an edition of 300, the tape of “The Way Things Go” cost her $350.

That cheap, simple buy has led Ms. Kramlich and her husband, the venture capitalist C. Richard Kramlich, down a costly, rocky path.

Over the last three decades, the couple, married for 37 years, have assembled an unsurpassed collection of time-based media art — video, film, photographic slides, audio and computer art that unfold to a viewer over time. Because much of the work demands large, uncompromising exhibition spaces, the collection inevitably outgrew their 1927 home. To display and live with the art, they commissioned a three-level weekend house from Herzog & de Meuron, the Pritzker Prize-winning architecture firm best known for the Tate Modern in London.

Although there are a handful of other serious collectors of video art, the Kramlichs have opted to incorporate their holdings into their daily lives. “What makes Pam and Dick’s house and collection unique is the way they integrated it,” said Chrissie Iles, a curator at the Whitney Museum. 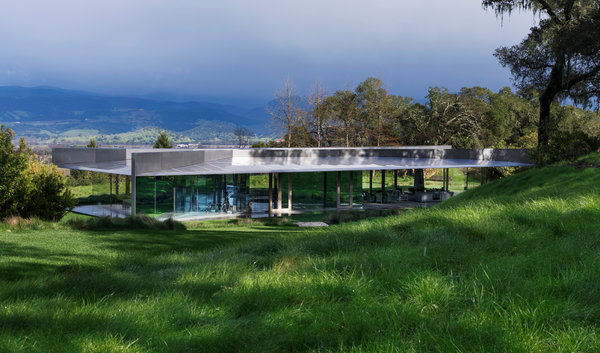 (The new Kramlich residence in the Napa Valley wine country is the subject of a monograph to be published by Hatje Cantz in April.)

At the entry to their city house are apple-shaped bronze doorknobs, artistically insignificant but symbolically potent. They commemorate a 1977 private offering of Apple Computer shares in which Mr. Kramlich, who is now 83, cannily participated. “It’s helped us to live the life we live,” he said.

Just inside, Ms. Kramlich, 75, likes to point out a print of the famous 1960 staged photograph, “Leap into the Void,” of Yves Klein diving out a window. “That’s what I felt we did — jumping into an unknown territory,” she said.

In the early years, she was fortunate to be shopping for work that few competitors sought. “I didn’t have the money to buy masterpieces and I wanted to live with masterpieces,” she said.

In the San Francisco townhouse, the art is placed everywhere you turn, in spaces public and private. Snaking up the staircase is Dara Birnbaum’s five-channel video installation of news coverage of the 1989 Tiananmen Square protests. Holding forth in the master bedroom is a Reinhard Mucha work of 1994-5 that features a cheap equipment stand for a 16-millimeter film projector, its speakers duct-taped to the poles. The projector beams a looped video of Mucha’s toddler son repeating the word “auto,” opposite a light box image of the artist as a young boy. “It made us think about our family histories and how important our relations are with our children,” Ms. Kramlich remarked.

Owning a time-based media work poses extraordinary exhibition and conservation demands that the Kramlichs fully appreciated only as they moved forward. In 1997, recognizing the dearth of institutional support for this kind of art, they established the New Art Trust, which they run in concert with three museums — the Museum of Modern Art in New York, the San Francisco Museum of Modern Art and Tate — and to which they have promised 35 art works as gifts.

Their purchase in 1995 of James Coleman’s projected-slide installation, I N I T I A L S, which came with strict regulations on display area and acoustics that prevented it from being shown in their San Francisco house, sharpened the couple’s ambition to build a home for art that would also be a weekend retreat.

In Napa, their friends Christian and Cherise Moueix, who had commissioned Jacques Herzog and Pierre de Meuron to construct the Dominus Winery, arranged in May 1997 for the couple to meet the two architects for dinner. The Kramlichs departed with the conviction that they had found their design partners. What they couldn’t know is that from commission to completion, the process would take 18 years.

There were site changes, forcing the architectural scheme to be rethought. The exigent demands of California code regulations added to the costs. And the successive wallops of the tech bubble collapse (Mr. Kramlich specializes in Silicon Valley investments) and the wider recession that followed the Sept. 11 attacks in 2001, made the couple question whether to continue.

“We thought, why do this homage to ourselves?” Ms. Kramlich said. “Let’s just do a display space for the art work.”

The budget was escalating without clear constraints. “We had no idea whether it would be $10 million or $200 million,” she recalled. “Dick was always saying, ‘You’re pouring money down a rathole,’ because I was spending it and he wanted to invest it.” In March 2002 they suspended the project, then revived it in 2004. Mr. Kramlich added: “I remember my dad asked me, ‘Can you afford this?’ I said, ‘I think so.’ That was one-seventh of what it cost.”

(Of the final budget, they would only say it came in somewhere between the $10 million and $200 million.)

For Herzog & de Meuron, the evolving Kramlich residence afforded a drawing pad for research that might be incorporated elsewhere, much as Frank Gehry’s imagining of an unbuilt home for the insurance tycoon Peter Lewis in Lyndhurst, Ohio, materialized in the Guggenheim Bilbao. In early renditions, the Kramlich house was a glass pavilion where video art could be displayed on curved glass walls and the natural setting would filter through. “There would be no boundaries,” Mr. Herzog said in a telephone interview. “It would be a total blur.”

To counter the impression that this was a modernist transparent box on a lawn, like Mies van der Rohe’s landmark Farnsworth House, the architects exhaustively investigated ways to construct an undulating roof composed of a Teflon-coated woven-fiberglass membrane.

But after the project was revived, the roof shrank into a thin aluminum carapace, and most of the media art was relegated to the cavernous lower level, which required the excavation of thousands of cubic feet of earth. Three teams of German architects and engineers fabricated flexible spaces that are sonically and visually discrete, allowing video art to be exhibited with a purity that museums can’t provide. The final phase of the construction was supervised by Aebhric Coleman, director of the Kramlich Collection, who was once the studio manager for his notoriously exacting artist father, James.

With their multilayered ceilings of fiberglass and acoustic plaster, the underground galleries define the state of the art. “This does not exist elsewhere,” Ms. Iles said. “Acoustic isolation is prohibitively expensive for most museums to build into any new building. The Kramlichs have worked really hard to create conditions where you can really slow down. It’s surprising how rare that fully embodied experience is.”

Currently, access to the house is restricted to museum patrons, art scholars or Kramlich friends. (For the public to be admitted the zoning designation would have to change.)

A visitor starts up a piece by using an iPad. For Richard Mosse, whose infrared 16-millimeter film “The Enclave,” on rebel groups in the Democratic Republic of Congo, is currently displayed on six large screens in the downstairs galleries, the exhibition quality exceeds anything he has known before, including the piece’s premiere in the Irish pavilion at the Venice Biennale in 2013. The installation is so uncompromising that he worried. “What I noticed is, it was bloody loud,” he said. “Pam is in her 70s, Dick in his 80s — maybe we should turn it down.”

Explaining why she and her husband were attracted to “The Enclave,” Ms. Kramlich observed, “We were fascinated with Richard’s use of infrared film and its naturally pink imagery, how it combined the beauty of the place and the horror of what was happening in the Congo in such a powerful way.”

The collectors continue to acquire pieces that — to put it mildly — pose exhibition challenges. They recently bought Joan Jonas’s “They Come to Us Without a Word,” a sprawling installation of videos, sculptures and drawings, commissioned for the United States pavilion at the 2015 Venice Biennale. To show it would take up much of the 8,000 square feet of the main gallery area on the lower level of the Kramlich house. “When somebody takes a work of that size, you can’t help but be pleased, it would be neurotic not to be,” Ms. Jonas says. “I’m not talking about the money, but finding a home for it.”

Herzog & de Meuron designed a monumental spiral staircase to connect the vast lower level and a smaller glass pavilion at the top, with a mezzanine floor in between. Along with an enclosable terrace, the mezzanine contains what was intended to be one guest bedroom, which the architects cropped into an eccentric shape so the house wouldn’t jut out from the slope. Ms. Kramlich chose this room as the master bedroom. “It’s too open,” she said of the spectacular glassed-in upstairs bedroom. “I didn’t want to be exposed all the time.”

The top floor pavilion has a Nam June Paik piece in a corner, but it is not, as it was in the earlier schemes, the primary place to view art. Its mirrored and glass interior walls and the transparent skin combine to refract and complicate the beautiful views of the oak-dotted hilly landscape. Inspired by the pavilions of the artist Dan Graham, the architects created an environment in which, Mr. Herzog says, “the viewer is being reflected — is viewing and being viewed — and what you see is not the same as what I see.”

Its enormous steel-framed glass doors, designed by an engineer who worked for the Lockheed Martin aerospace firm, open to allow direct contact with the natural setting and a horizon-edge pool. Someday, these doors may also serve as projection screens.

For now, though, the translucent space feels like an art installation itself, a sensation enhanced by the way you ascend to it. Entering the house, through a narrow passageway between mud-colored, sprayed-concrete walls, you find yourself in what Mr. Herzog describes as “a large underworld.” From there, you progress to the light-saturated top floor. It is, he says, “a wholly psychological experience — even if you are in the glass house, you feel the underground.”

When the images penetrate and bounce off the glass, you feel your perception of reality shift. To devotees of video art, this is a familiar and welcome sensation. “It is not a dead space, ever,” Ms. Kramlich said exuberantly. “It is moving pictures that are reality.”

As if a pause button has been pressed, your clock is reset. You can return to the underground space and give to the time-based art what this kind of art too seldom receives: the time to slow down and watch. 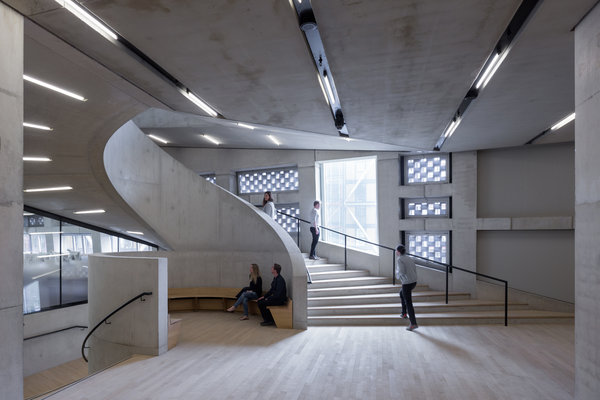 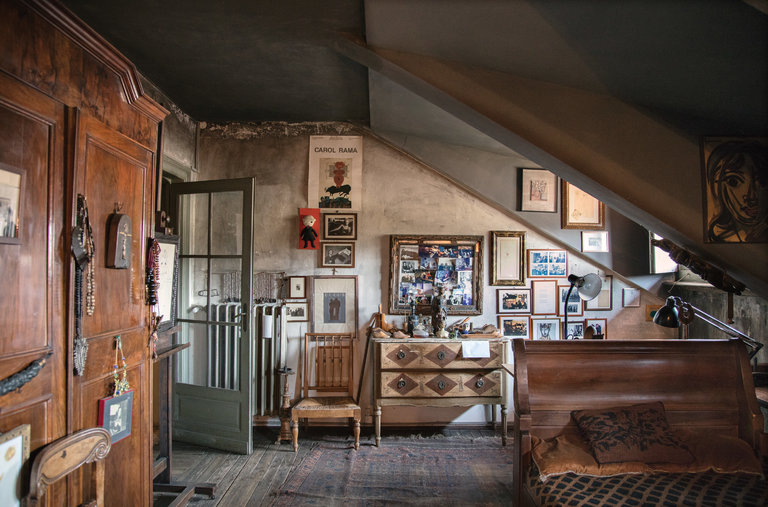 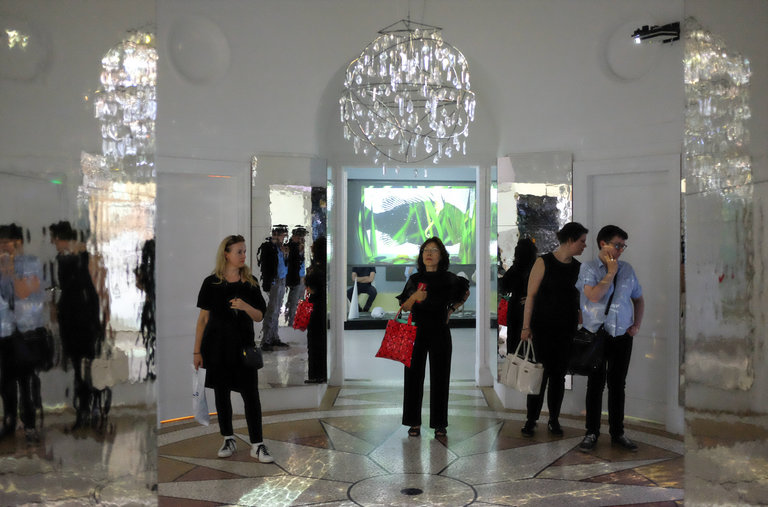