In the early 1990s, the end of the Cold War gave rise to a global movement to rid former war zones of land mines, which were littered across at least 68 countries. President Bill Clinton became the first world leader to call for their elimination on a global scale, but when it came time to formally ban them, the United States refused. Instead, over two decades, the United States invested $2.9 billion in demining projects and the destruction of other conventional weapons around the world. It has also destroyed millions of its own antipersonnel land mines, a weapon deemed particularly dangerous to civilians because it is buried underground and detonates when stepped on.

While much of the world has moved away from the use of land mines of all kinds, the United States Army is now developing a new line of them to replace its suite of antivehicle land mines from the 1980s. According to Audra Calloway, a spokeswoman at Picatinny Arsenal, which has long supervised weapons development for the service, these munitions are meant to replace the service’s current inventory, which were manufactured 30 years ago. The Army’s end goal is to create a munition that can be detonated remotely by a soldier — a design feature that in theory could reduce the risks that land mines pose to civilians. It could also keep the United States aligned with — but still not signatory to — an international treaty signed by more than 160 countries that bans the use of antipersonnel mines, but does not prohibit mines designed to destroy vehicles like tanks and armored personnel carriers. Since 2016, the Army has spent $106 million on this initiative, called the Gator Landmine Replacement Program, yet it is still in its early stages. Here’s what we know so far.

What is the Gator Landmine Replacement Program?

In 2016, the Army set up an office called Gator Landmine Replacement Program to oversee the development of a new class of mines, called area-denial munitions, which are intended to be placed on top of the ground and detonated manually by a person from a remote location. Army documents released by the Picatinny Arsenal public affairs office in 2016 said the system would produce both anti-vehicle and antipersonnel mines, but in October, Calloway said this was not correct and the program would only develop the former. Picatinny Arsenal has yet to produce any prototypes.

Unlike antipersonnel mines, antivehicle mines tend to be larger and heavier and often incorporate warheads specially designed to punch through the steel hulls of tanks and armored personnel carriers. So while a human being might not weigh enough to set off an antivehicle munition, a sedan or pickup truck driving over one certainly would. 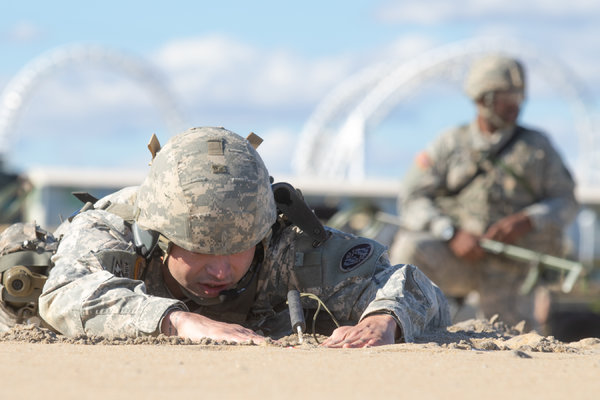 [Sign up for the weekly At War newsletter to receive stories about duty, conflict and consequence.]

The replacement the Army envisions involves a series of mines connected by a wireless network, far removed from American troops, who would monitor sensors attached to the weapons. When a vehicle approaches, the sensors would alert the operator, who would then decide whether to detonate the mine — based on whether the approaching vehicle posed a threat. The Army has not given details as to how operators would be able to see the approaching vehicle. The mines would also have a self-destruct feature that could be manually triggered so that the munitions didn’t detonate later by mistake. The Army plans to drop these mines into place from warplanes, according to details released by Picatinny Arsenal. The design plans raise many unanswered questions: How would these mines, with their sensitive electronics and sensors, survive high-speed impact with the ground? How accurate would they be as scattered? How would the required wireless network activate and then connect with distant control stations? What would power them?

How are these mines going to be different from older mines?

Tripwires and pressure-plates are the hallmark of victim-operated weapons, meaning that they are triggered by the person or vehicle they are targeting — or anyone else who comes in contact with them. Given their inability to discriminate between combatants and civilians, conventional antipersonnel mines are banned by more than 160 countries under the Convention on the Prohibition of the Use, Stockpiling, Production and Transfer of Anti-Personnel Mines and on their Destruction, also known at the Ottawa Treaty. The 30-year-old antivehicle land mines the Army wishes to replace were a bit more sophisticated; they used sensors to measure the change in the surrounding magnetic field as armored vehicles approached and detonated themselves, but they still posed a threat to any civilian vehicle that drove nearby. The future Gator Replacement mines are meant to detonate only upon the command of a soldier who is able to positively identify a potential target as an enemy combatant. But what kind of information would the sensors send to operators, so they might tell an enemy tank from a civilian truck or sedan? The Army has not publicly released details and faces significant technological hurdles to accomplish its goal.

When is the last time the United States used land mines in conflict?

In the 1970s, the Army spent millions of dollars on what it called “scatterable mines” — cluster bombs and artillery shells containing antipersonnel and antivehicle land mines designed to self-destruct after a preset amount of time. These more advanced mines were supposed to be safer than older generations and not leave behind duds, or munitions that have the potential to detonate. Their combat debut in 1991 did not bear that out. During the Persian Gulf war, American warplanes dropped 1,314 “Gator” cluster bombs that cast almost 90,000 anti-vehicle mines and 27,500 antipersonnel mines into the Kuwaiti and Iraqi sands. At $39,000 per bomb, they were three times as expensive as any other airdropped cluster munition the American military had in its inventory. Contract deminers working in Kuwait shortly after the war reported finding 205 dud antitank mines and 841 antipersonnel mines from Gator bombs; the total number of dud mines found in Iraq after the war is unknown.

Whether these weapons played any role in defending American troops on the ground is unclear. On Jan. 30, 1991, three howitzer units from Fifth Battalion, 11th Marine Regiment, fired the first and possibly only artillery-delivered scatterable mine mission in history, spreading more than 850 mines between a series of observation posts located along the Saudi-Kuwaiti border. Although those mines were supposed to self-destruct, contract deminers found hundred of their duds in Kuwait after the war. The State Department has acknowledged the use of land mines only once since then: a “single munition” used in Afghanistan in 2002.

The United States still retains antipersonnel Claymore mines, which were designed in the late 1950s, and can be rigged to explode through a booby trap like a tripwire, or can be made to detonate upon command. United States policy requires them to be used in the latter mode.

What is the response to the Army’s new land-mine program from humanitarian workers?

Some arms-industry monitors are concerned about why the Army plans to manufacture new land mines, given that the United States has not relied on them in nearly two decades of war in Afghanistan and Iraq. “This new weapon potentially acts as both an antipersonnel land mine and a cluster munition, both of which have been repudiated by the international community for their disproportionate harm to civilians,” said Brian Castner, the senior weapons adviser for Amnesty International. “Instead of designing new indiscriminate weapons, the United States should be ratifying both the land mine and cluster-munitions conventions and working to eliminate their use.”

John Ismay is a staff writer who covers armed conflict for The New York Times Magazine. He is based in Washington.