WARSAW — One night in April 2017, Jakub Skrzywanek was inside the Powszechny Theater in Warsaw, pushing tables against the windows to barricade himself and actors inside. Outside were dozens of protesters — a mix of hard-line Roman Catholics and right-wing activists — hoping to stop a production of “The Curse,” a provocative play about child sexual abuse in the church.

The furor at the Powszechny (pronounced pov-SHECK-ny) was one of the first signs that Poland’s theaters would be at the forefront of the country’s culture wars, which pit liberals against the governing populist Law and Justice Party, as well as other conservative groups and the Catholic Church.

Many theaters would keep a low profile after a protest, but now the Powszechny, whose slogan is “Theater that gets in the way” is courting controversy again with the opening of a play directed by Mr. Skrzywanek: “Mein Kampf,” with all the dialogue taken from the book by Hitler.

“The cultural field is a war field right now,” said Tomasz Thun-Janowski, the director of the city of Warsaw’s cultural department, which gives funding to the city’s theaters, including the Powszechny.

Poland’s government “sees theater as a way of creating some sort of national identity,” he said. It has focused onone-off grants to theaters that stage traditional plays, he added. “The government wants to build rather conservative, rather nationalistic, tendencies in the theater,” he said.

Piotr Glinski, Poland’s culture minister, said that the government had “been building new kinds of institutions” since the Law and Justice party was elected in 2015, and it wanted them to be patriotic. “Thanks to such institutions we can regain our memory — as a free nation, as a community,” he wrote in an email.

Mr. Skrzywanek, the director, said he wanted “Mein Kampf” to show how divisive Poland’s politics has become. “I want to show that the language used by politicians, by everyone, in Poland is worse than the language of Hitler,” he said. The fallout from the murder of the liberal mayor of Gdansk in January was the most recent example of the toxic political climate in the country. The killer was a disturbed individual but all sides used it for aggressive political point-scoring. National elections are scheduled for October. 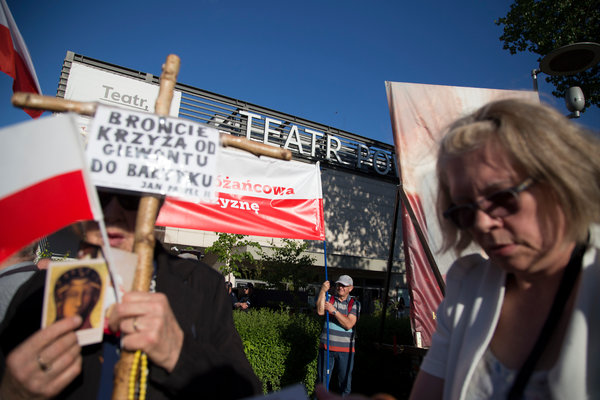 Anti-Semitism is also rising in Poland, Mr. Skrzywanek said. (A far-right tabloid recently published an article telling its readers “how to spot” a Jew.)

He wants “Mein Kampf” to stir reflection, he said; if it is protested, he will feel he has failed. But “If the government wants to make a scandal, it will.”

In 2017, Poland’s government withheld funds from two theater festivals: one because it planned to stage “The Curse;” another, because Oliver Frjlic, “The Curse’s” director, was one of the festival’s curators. (Mr. Glinski said these are just two examples from “dozens of decisions.”)

The government directly finances four large theaters. (The Powszechny is not one of them.) But Mr. Skrzywanek said he felt the controversies were also having an impact on the country’s many regional and local theaters, which were avoiding plays that might cause upset. Local governments that fund those theaters know that “political art is never good for them,” he said. “It’s better for them if it’s just crazy Ceasars and old farces.”

In February, the mayor of Rzeszow stopped rehearsals of a play at the city’s theater that discussed sexual abuse and compared the Polish Catholic Church to Judas, the betrayer of Jesus. “People are saying it was the most violent act of censorship since 1989,” said Pawel Passini, the play’s director, referring to the year when Poland began its transition to democracy. A spokesman for the mayor denied any censorship, and said in an email that the mayor just wanted to “draw attention” to parts of the show that could cause religious conflict.

Mr. Thun-Janowski, of the city of Warsaw, said the Powszechny is different from most theaters in Poland and less susceptible to pressure. There is a saying in the country, he said: “‘If you want a peaceful afternoon, don’t go to the theater.’ The guys from the Powszechny believe that.”

The Powszechny’s artistic director, Pawel Lysak, 54, said that he wanted the theater to cause a stir since he became its head in 2014. A play should always contain “something difficult, something provocative, something to change the world,” he said.

But the protests against “The Curse” came as a surprise, he said. The initial mass demonstrations involved up to 1,500 people held back by dozens of police. They lasted only three days, but during the play’s run, protesters set off a smoke grenade in the theater, sent death threats to the actors and box office staff and poured butyric acid, sometimes used in stink bombs, in the theater causing it to close for a month.

Members of Poland’s government accused the theater of insulting the Catholic Church, and prosecutors opened a blasphemy investigation.

“When we were having to take care of our actors and our audience, I thought, ‘Should I be doing this? It’s dangerous to them,’” Mr. Lysak said. “But ideologically, we never doubted it.” The church has a strong influence in Poland and its role needs to be discussed, he said. Poland should also reflect on its turn to the right, he added: That was why he is putting on “Mein Kampf.”

“On the right side, they have a very strong project: God, country, blood, religion, family and honor,” he said. “So if we don’t agree with this national project, we need our own.”

Mr. Glinski, the culture minister, said that the Powszechny “expresses radical views and is a part of current political dispute in Poland.” He mentioned a scene in “The Curse” that involved an actress simulating oral sex on a statue of John Paul II, the first Polish pope, which was shown on state TV and partly caused the protests. “Can you imagine the scenes of oral sex with the symbols of Judaism or Islam on Broadway?” he said.

“There has always been room for provocation in the theater,” Mr. Glinski added. “The question is what purpose this provocation should serve.”

It is easy to see that “Mein Kampf” could offend Catholics and conservatives in a similar vein. At one point, a replica of the “Black Madonna of Czestochowa,” one of Poland’s most revered Catholic icons, will be lowered into view, Mr. Skrzywanek said, and the actors will whitewash her face.

In another scene, an actor will wear a mask of Jaroslaw Kaczynski, the founder of the Law and Justice Party, while speaking Hitler’s words. The character will later be murdered onstage.

But at a recent rehearsal, the actors didn’t seem worried about the play’s provocations. They first rehearsed an absurd scene set in an art gallery, during which two actors voice Hitler’s disapproval of modern art while others pretend to be exhibits. They then rehearsed a powerful scene, set around a dinner table, where the characters spoke anti-Semitic diatribes from the book as if they were like polite conversation, while sipping soup.

Mr. Skrzywanek watched from the side of the room, with his feet on a chair. He said little but occasionally gasped with excitement.

After the rehearsal, Mr. Skrzywanek said he felt a lot of pressure around the play. The play’s first run was close to selling out. “It’s much bigger interest than ‘The Curse,’” he said. “People are totally waiting for it and no one knows what to expect.”

The Law and Justice party’s politicians only become interested in important plays, he added. “I think this may be one.”

But he insisted his aim was not to stir Poland’s culture wars. “Mein Kampf” was meant to be critical of Poland’s liberals, and their aggressive language, as well as conservatives, he said. “For me, that’s really the most radical gesture you can do in Polish theater,” Mr. Skrzywanek said, “to not accuse a specific group of people, but everyone.”