Welcome to the T List, a newsletter from the editors of T Magazine. Each week, we’re sharing things we’re eating, wearing, listening to or coveting now. Sign up here to find us in your inbox every Wednesday. You can always reach us at [email protected].

A Grand Hotel Opens in the Heart of Kyoto 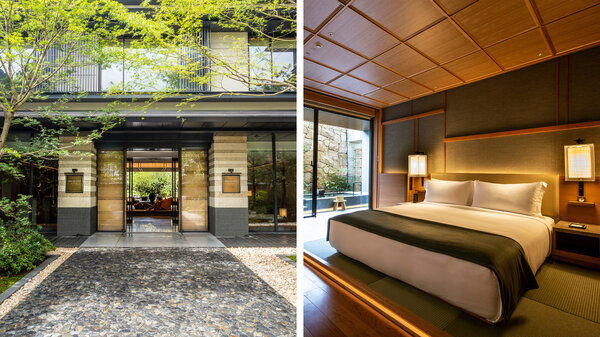 At the heart of Kyoto is Nijo Castle, which served as the seat of the Japanese empire. But just across the street is a property that for centuries housed a different sort of dynasty, that of the Mitsui family, long filled with prominent businesspeople. Next month, the property will open to the public in the form of the 161-room Mitsui Kyoto hotel. With a pair of restaurants helmed by esteemed chefs — Tetsuya Asano, formerly of L’Espadon at the Ritz Paris, and Shozo Sugano — it offers guests an undoubtedly sumptuous experience, but the idea was to preserve a homey feel. Lodgers enter via the restored Kajiimiya Gate, built during the Genroku era (1688-1704), and can attend morning meditation in the family’s former parlor, with walls lined with hinoki cypress and a view of the garden pool and weeping cherry tree. The bedrooms are modeled after traditional Japanese tearooms, with birchwood flooring and plush, low furnishings. More lounging, perhaps following a private tour of Nijo Castle, can be done at the hotel’s underground onsen. Rooms start at around $875 per night, 284 Nijoaburanokoji-cho, Aburano-koji St. Nijo-sagaru, Nakagyo-ku, Kyoto, Japan, hotelthemitsui.com

Intimate Party Pictures of Joan Didion and Others

Born in Paris in 1925, Camilla Pecci-Blunt was the youngest child (along with her twin, Graziella) of a wealthy and aristocratic Italian-American family. She picked up a camera at an early age and began taking photographs at the various events to which she was invited, including lunches at Villa Reale di Marlia, the Pecci-Blunt estate in Lucca, Italy, and the wedding between the Fiat chairman Gianni Agnelli and Princess Marella Caracciolo di Castagneto. Desirous of a less conventional existence, Camilla eventually married, at 37 — much to the dissatisfaction of her family — a handsome and charismatic American from Wisconsin named Earl McGrath, who was six years her junior. Together, the couple embarked on a glamorous life — moving between the worlds of film, rock ’n’ roll and art — that grew to include dinners, parties, after-parties, weddings and vacations with Mick Jagger, Joan Didion, Audrey Hepburn, Jacqueline Kennedy, Andy Warhol, Cy Twombly, Jasper Johns, Robert Rauschenberg, Sonny Mehta, Anjelica Huston and many others. At every instant, McGrath was never without her camera (first, a Roliflex; then, starting in the ’60s, a Nikon). McGrath died in 2007, but her meticulously organized photographs are finally being published this month by Knopf in “Face to Face,” with accompanying essays by friends of the couple: Fran Lebowitz, Harrison Ford, Griffin Dunne, Vincent Fremont and Jann Wenner (as well as an introduction by the journalist Andrea di Robilant). Because McGrath’s photographs were never used for any kind of publicity (and her subjects were her family and friends), there is a marvelous sense of candor and intimacy to them, which capture, in their totality, an incredibly full and joyful life. $75; penguinrandomhouse.com.

Unlike ballet itself, the origin of the ballet flat is imprecise. But we do know that in the 1940s, the American dance apparel manufacturer Capezio was commissioned by the popular sportswear designer Claire McCardell to create a collection of ballet flats, with the intention of transforming the dainty looking dance slipper into more of an everyday style. Not too long after, in 1956, the French ballet apparel company Repetto designed a pair of flats for Brigitte Bardot. Ever since, fashion has maintained a fond attachment to this simple accessory, at once elegant and practical. Recently, a handful of designers found ways to update the wardrobe staple once again. For her latest collection, which was inspired by Ireland’s remote Aran Islands, Simone Rocha mixed pearls, tweed, shells and chains in a variety of pieces, including an off-white faux fur Mary Jane with a strand of faux pearls that stretch across the toe line. Loewe produced a soft leather, high-throated flat embellished with an oversize flowerlike pearl broach. Meanwhile, Maison Margiela updated its famous Tabi shoe (the Japanese split-toe style) with metallic spray paint. And Gucci mixed gold and silver hardware with a youthful floral print and pointed toe. While heels aren’t likely to get much use as we head into another season of social distancing, a lively flat always comes in handy, and might even add a spring to your step.

Amid the ebbs and flows of Covid-era fine dining, chef Jeremy Chan of London’s pan-continental restaurant Ikoyi has been forced to adapt. Known for his hyper-seasonal tasting menu, Chan introduced user-friendly à la carte options like fried chicken this summer. “I wanted to reach a new audience while increasing our covers,” says Chan, a detail-obsessed Princeton graduate who was born and raised in Northern England. But the city’s recently imposed 10 p.m. curfew limited Chan’s choose-your-own-adventure format. “We’d have half the restaurant doing the tasting menu and the other ordering à la carte, and two hours to do it,” he says. After some consideration, he and his five-person kitchen reprioritized prix fixe, making flexible ordering only possible before 6 p.m. Those skeptical of eating before sundown should know that the revised à la carte program serves as a kind of greatest-hits reel of Chan’s year in à la carte experimentation: One example is Ikyoki’s creamed spinach — a new early-bird exclusive and a dark-horse favorite of Chan’s. “I’m obsessed with it,” he says of the updated classic — a blend of naturally salty Japanese spinach, brown butter garlic confit, mascarpone and “crystal-clear” mushroom oil, served with caramelized, caviar-topped veal nuggets. “It’s a very pure dish, and I think it’s going to stay on the menu for a long time.” 1 St. James’s Market, St. James’s, London; ikoyilondon.com.

The stylist and designer Colin King is known for creating pared-back but atmospheric interiors that feel, perhaps above all, serene. And by his own admission, he has long been nervous about using color in his work. “It’s very abstract,” he says, “Every hue has a lot of properties — and then you put furniture on top of it.” Yet when the textile company Beni Rugs invited him to collaborate on a collection of its thick hand-knotted floor coverings, he decided to use the opportunity to experiment with a palette more vibrant than his trademark moody grays and off-whites — one partly inspired by a trip he took to Morocco last year with the brand’s founders, Robert Wright and Tiberio Lobo-Navia. Released this month, the 11 designs — which range from striped compositions of ocher, aubergine and navy to intersecting fields of terra-cotta and vermilion — are all made to order in custom sizes by artisans in the Atlas Mountains, who complete every step of the process, including rearing sheep for wool, and dyeing and weaving the yarn, entirely by hand. But if the rugs’ burned oranges and earthy yellows recall the landscapes of their home country, the collection’s evocative juxtapositions of color are indebted to a source closer to home for King: the work of the American Abstract Expressionists Barnett Newman, Mark Rothko and Clyfford Still. Their paintings, to which the designer has always been drawn, inspired him to temper the collection’s warmer, sun-baked shades with an array of deep, inky blues. “I ended up adding more colors,” he explains, as if to his own surprise, “but I think I created a spectrum that feels calm in a different way.” From $545, benirugs.com

The Restorative Benefits of a Tea Garden