Sad, humbled and proud. It was weird to feel those emotions simultaneously, but that’s what it was like to work on a tribute comic for Stan Lee.

Lee, who co-created many of Marvel’s biggest heroes, including Spider-Man, died on Monday at 95, and The Times was able to publish “My Moments With Stan” — written by Brian Michael Bendis, drawn by Bill Walko and colored by Howie Noel — within a few hours of the news.

As a final farewell to Stan, I want to share the secret origin of the project.

Last year, when reports surfaced about Lee’s poor health, Amy Padnani, a senior staff editor on the Obituaries desk, gathered a group to discuss how The Times could show Lee’s influence on pop culture. In addition to his obituary, we thought about a slide show featuring the characters he co-created, a video showing his film cameos and, naturally, a comic book of some kind. (I always feel gratified when my nerdy area of expertise benefits the paper.)

Brian Michael Bendis is a prolific creator of comics who in 2000 began an influential run on “Ultimate Spider-Man,” a retelling of Peter Parker’s story for modern times. As a fan of his work, I had commissioned him in 2004 to tell the story of his early days in the industry, in comic strip form, for The Times.

I pitched him the Lee tribute idea on March 8, 2017. He responded almost instantly: “Let’s discuss. I have some kind, personal stories that show a more human side.” 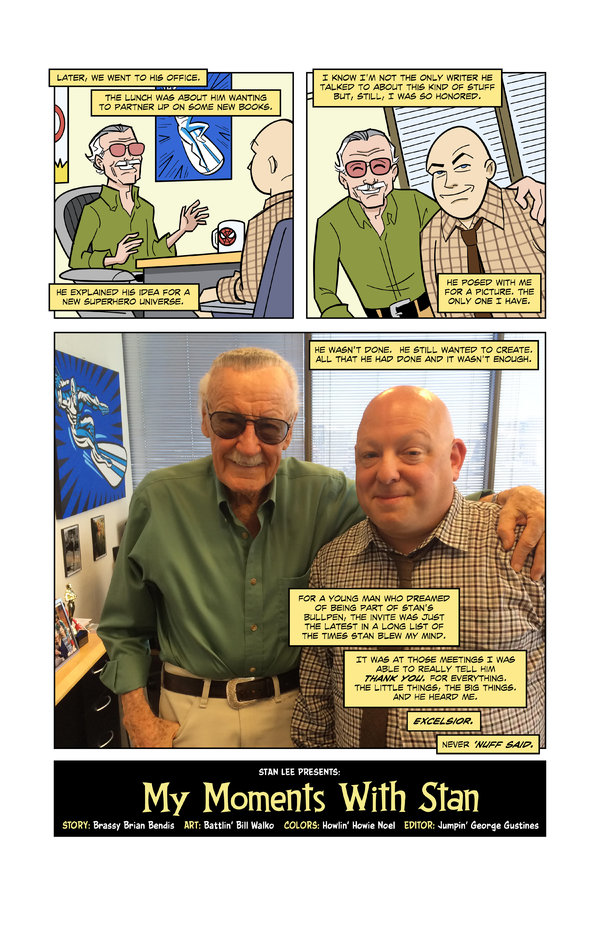 Incredibly, he finished his testimonial within a week.

Then I felt terror. I’ve read a multitude of comics, but this was his realm and I had to give him notes.

I would check in with him nervously over the next few months as he worked on revisions. “You’re the king of Jewish guilt,” was one of his playful responses. But another spoke to how we all felt: “I am dragging my feet on this for emotional reasons.”

The new version arrived in late October of last year.

Wrangling artists to each draw one page of the story would have been too difficult. I hoped to have Bendis illustrate it, but when he moved from Marvel to DC Comics that idea never gained traction.

Enter Bill Walko, a cartoonist with whom I connected years ago based on our mutual love of “The New Teen Titans.” I knew he was extremely fast and could capture the look I wanted. My goal was for us to complete the comic quickly but to have no need to publish it for many years.

I reached out to Bill in November and — four days later! — he supplied rough layouts. Comics are often a group effort — writer, penciler, inker, colorist, letterer, editor, publisher — and Bill showed me how wonderful that collaboration could be.

He improved upon my good suggestions and politely rejected the bad ones. He also added flourishes not in the script, like presenting the title, “My Moments With Stan,” in the font of the original Fantastic Four logo and curating the display of classic Marvel covers shown on the first page.

By February, Bill had drawn and lettered the comic. I recruited one of my colleagues, Susanna Timmons, to copy-edit it and was delighted to discover she was a fan of “Powers,” a comic book series by Bendis and Michael Avon Oeming about police work in a city teeming with superheroes and villains.

After recovering from a serious illness that landed him in the hospital in December, Bendis gave the thumbs up on our progress in May. “Please tell Bill thank you for his outstanding work,” he wrote to me. “I’m sorry I wasn’t more communicative with him. This was a very strange year. Great casting on your part.” (I wonder if I can get that included in my staff evaluation.)

Bill suggested we commission a colorist: “I think it will support the four-color subject matter all the better!” He noted that colors would add clarity, on Page 1, to the characters on the Marvel covers; on Page 4, to the montage of the film heroes; and on Page 5, to the transition from the memory of a Bendis and Lee meeting to the photograph of that moment.

I had worked with Howie Noel on a personal comic project that needed color. When I reached out to him last month to check his availability, his reply was swift: “It’d mean the world to me to take part in this,” he texted. Like Bill, he was speedy and completed his work on Oct. 26, just 17 days before Lee died. 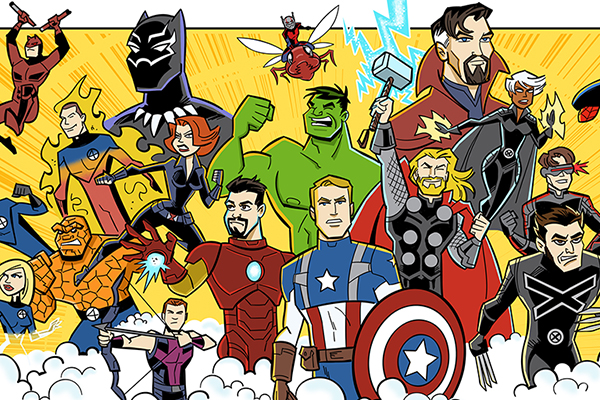 George Gustines is a senior editor. He began writing about the comic book industry in 2002. @georgegustines • Facebook