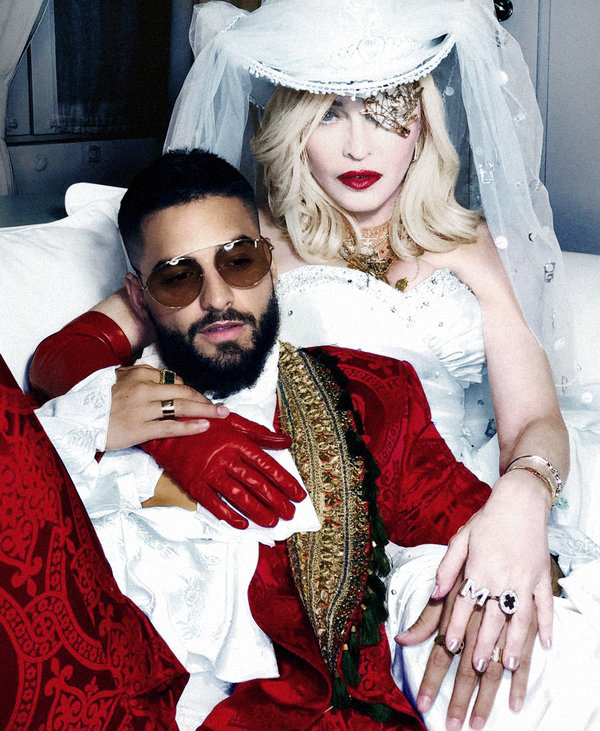 Every Friday, pop critics for The New York Times weigh in on the week’s most notable new songs and videos. Just want the music? Listen to the Playlist on Spotify here (or find our profile: nytimes). Like what you hear? Let us know at [email protected] and sign up for our Louder newsletter, a once-a-week blast of our pop music coverage.

Madonna has been almost everything — that’s the party line of her nearly four-decade-long career. But on her 14th album due in June, “Madame X,” she promises to become an actual shape-shifter, a secret agent “fighting for freedom” and “bringing light into dark places” in the guises of a professor, a housekeeper, a nun, a cabaret singer and a prostitute, among others. If her overstuffed 2015 album “Rebel Heart” was a touch reflective, reckoning with elements from her past as a not-always-embraced cultural rabble-rouser, “Madame X” so far promises to be a bit of a romp. She has said the inspirations come from her adopted home, Lisbon, and her longtime fascination with Latin music, which has been a part of her aesthetic since she touched down in New York at age 19. Its first single, “Medellín,” is a spotlight for the Colombian star Maluma, who met Madonna backstage at the MTV Video Music Awards last year and cheerfully glides through the track. Though this is likely the song on which she morphs into a cha cha instructor, Madonna is playing a fantasist. The producer Mirwais, who was one of Madonna’s core creative partners from her 2000 album “Music” through “Confessions on a Dance Floor” in 2005, returns to help provide a dreamy backdrop for her carefully sung (and digitally tweaked) voyage to an alternate past: a life, and love, in Medellín. The track soars when it hits its arms-outstretched chorus and dips when it reaches its most cringe-worthy lyric, but while its missteps aren’t barbed enough to deflate a reverie, it feels more like a stride in the right direction than an emphatic stomp forward. CARYN GANZ

For the last couple of months, Daddy Yankee’s “Con Calma” has been nigh unavoidable, a gratuitously catchy Spanish-language update of a gratuitously catchy song (Snow’s “Informer”). In the contemporary pop climate, that can only mean one thing: an English-language version on the horizon. That it ended up involving Katy Perry is the biggest surprise. That her opening verse is a cross-cultural flirtation is less so: “A little mezcal got me feeling spicy/I know that we don’t speak the same language/But I’m gonna let my body talk for me.” And that her version of the chorus declares, “I got the poom-poom, boy/You could be my Puerto Rican dream, I’ll be your California girl” — well, that’s not awkward at all. By contrast, Alicia Keys isn’t even the slightest bit uncomfortable on her appearance on a new version of “Calma,” a lustrous rhythmic ballad that’s been a major hit for Pedro Capó & Farruko. Like the song itself, she’s relaxed, beatific, and subtle. CARAMANICA

Mavis Staples turns 80 on July 10 and remains absolutely indomitable. “Anytime” is from “We Get By,” an album due May 10 with songs written and produced by Ben Harper. “You can’t shake me/It ain’t no use in trying,” she sings over little more than a basic beat and a lean guitar lick, and the husky confidence of her voice brooks no argument. PARELES

SZA, the Weeknd and Travis Scott, ‘Power Is Power’

It’s the last season and last chance to cash in on “Game of Thrones”-themed spinoffs, like this song from the album “For the Throne: Music Inspired by the HBO Series ‘Game of Thrones.’” The Weeknd, SZA and Travis Scott sling direct plot allusions — “A knife in my heart couldn’t slow me down” — over a clacking beat and a rubbery distorted bass line, heading toward a chorus full of minor-chorded, movie-theme pomp. It’s a fully contrived commercial product, but all three vocalists sound properly haunted and determined. PARELES

Bear with me here: the millennial-era version of a “We Are the World”-style multi-superstar song-for-a-cause features Justin Bieber playing a baboon, Lil Jon as a clam, Zac Brown as a foulmouthed cow and Charlie Puth as a sensual giraffe. “Earth” — orchestrated by and featuring a glib verse from the comedy rapper Lil Dicky — is audaciously absurd, and surprisingly fun. And strange — very, very strange. Lil Yachty plays HPV, and somewhere in here is the disembodied line, “We forgive you, Germany.” If you make it to the end, there’s a back and forth about global warming between Lil Dicky and Ariana Grande, who sings “I love the Earth” and cautions that the planet is in dire trouble, “unless we get our [expletive] together now.” CARAMANICA

The Boyboy West Coast, ‘U Was at the Club (Bottoms Up)’

The snippet that launched a thousand memes has become a full-fledged song, thankfully without losing any of its intuitively tuneful no-fi oddity. The degree of vocal filtering and manipulation here is staggering, resulting in something like a fifth-generation mimeograph of a Flo Rida number. CARAMANICA

No recordings of Buddy Bolden — the turn-of-the-20th-century trumpeter widely credited with helping to invent jazz — have ever been found. So to score “Bolden,” a new film about his life, Wynton Marsalis and his crew of Jazz at Lincoln Center-affiliated musicians had to come up with something entirely on their own, working back from what early jazz sounded like in the 1910s. This track comes from a raucous dance hall scene, with a young Bolden and his band kicking up dust before a rapturous crowd, four horns improvising in a gallivanting tangle over a funky rhythm, always landing on the downbeat with a vigorous thump. GIOVANNI RUSSONELLO

Sheryl Crow has remade, as a posthumous duet, a song she recorded on her 1996 album “Sheryl Crow” that was also chosen by Johnny Cash for his 2010 album, “American VI: Ain’t No Grave.” It’s a view of dire news events and heartless realpolitik — still sounding current decades later — transmuted into prayer. Now it’s even darker. Stark piano chords and elegiac strings have replaced guitar picking, Crow’s new vocal sets aside folky grain for aching purity, and in the final moments she and Cash trade the word “freedom” as if it will never truly arrive. PARELES

It could have been profoundly simple: “Slide” is a fleet, direct-concept, low-complexity, high-energy collaboration between French Montana, playing the genre elder here, and two up-and-comers: the melodic crooner Lil Tjay and the appealingly eccentric Blueface. It’s effective, largely because little gets in the way, not even French Montana’s craven pilfering of early G-funk (a lyric cribbed from Dr. Dre’s “Dre Day,” a beat switch to Snoop Doggy Dogg’s “Serial Killa”). And yet, there’s mayhem happening here — the three artists sound like they’re performing three different songs. (Lil Tjay’s is the most effective.) And the video is excessively disorienting, a pure distraction exercise featuring Day of the Dead iconography, color-coordinated suits and marketing for the viral mini-video app TikTok. CARAMANICA

Sarah Mary Chadwick, a New Zealand-born songwriter living in Australia, moved from fronting a grunge band, Batrider, to a solo career full of somber, moody, keyboard-centered songs. She recorded “The Queen Who Stole the Sky,” her new album, singing and playing live on the 147-year-old pipe organ at Melbourne Town Hall. Sustained chords, by turns implacable and triumphant, bring a magisterial gravity to her cryptic but emotive lyrics: “I moved but slowly through the gloom,” she intones, “and I pushed it into light to see what it looks like.” PARELES