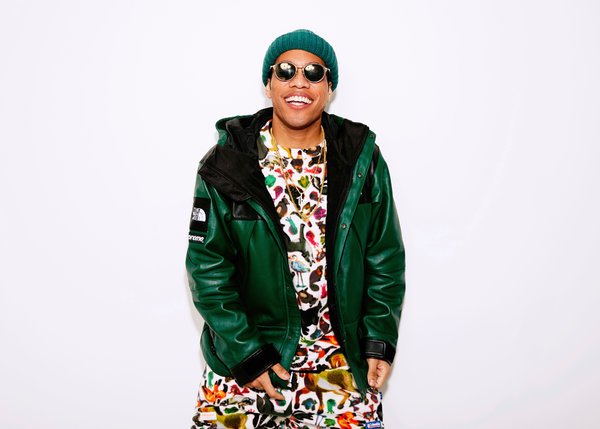 Every Friday, pop critics for The New York Times weigh in on the week’s most notable new songs and videos. Just want the music? Listen to the Playlist on Spotify here (or find our profile: nytimes). Like what you hear? Let us know at [email protected] and sign up for our Louder newsletter, a once-a-week blast of our pop music coverage.

The music struts while the lyrics bristle in “King James,” from Anderson .Paak’s album due in April, “Ventura.” The springy bass line and jazzy chords reach back to the analog exuberance of 1970s Stevie Wonder, and like Wonder, Anderson .Paak fuses an optimistic sound with a spirit of determined resistance, alluding to a jumping over wall, Colin Kaepernick and deep-seated racial hostility. As party whistles blow, an exuberant chorus joins him to sing, “O.K. now, just don’t stay down/Let’s go shake down until we get what we need.” JON PARELES

A conceptual tour-de-force that lands with the force of a dance track, Holly Herndon’s “Eternal” is as propulsive as it is disorienting. She built it with other human singers and with artificial-intelligence software that manipulated her own vocals all over the place. A choir of women’s voices, harmonizing and ricocheting in counterpoint that could be Balkan or extraterrestrial, heaves above a booming drumbeat and bursts of synthesizer, landing hard together and then veering apart, with barely intelligible lyrics that clear for phrases like “too much to be contained.” The video shows Herndon crowned in motion-capture sensors and other women’s faces flickering in and out of focus, as software struggles to digitize and contain the complexities of flesh. PARELES

Sean Paul, from Jamaica, and J Balvin, from Colombia, are both masters of the crossover-building strategic alliance. “Contra la Pared” (“Against the Wall”) is a canny, skeletal, all-hook production (by Tainy) that puts Paul squarely on Balvin’s turf. It tops a lean reggaeton beat with flute sounds from Colombia’s Andean traditions, as the two men take turns — with Balvin’s smooth croon and Paul’s rough declamation — exulting in how irresistible he is to a certain woman. Paul switches between English and Spanish; he’s got an eye on changing pop demographics. PARELES

Angelique Kidjo’s next album, due April 19, will be “Celia,” a tribute to the Afro-Cuban singer Celia Cruz, and she’s not shying away from any challenges. “Quimbara” was one of Cruz’s signature songs in the 1970s, with high-speed, tongue-twisting lyrics. Backed by Michelle Ndegeocello on bass, the Afrobeat pioneer Tony Allen on drums, Dominic James on guitars and the Gangbe Brass Band, Kidjo reconnects the salsa original to West Africa, layering the song with a tumbling six-beat rhythm, a brass-band undertow and a tangle of scurrying guitar lines while she belts with enough grit to rival Cruz herself. PARELES

RuthAnne Cunningham, an Irish singer and songwriter credited on hits from JoJo, Britney Spears and Westlife, uses vintage soul materials for “Love Again.” She tops the sturdy gospel chords from “People Get Ready” (and countless other songs) with a familiar pop premise: that her love can rescue a man from his heartbroken misery. There’s an aching, unpredictable rawness in her voice that makes the classic plea work one more time. PARELES

Dwight Trible’s big, open baritone might sound to you like a wake-up call, or an entire universe yawning. (You won’t be yawning yourself.) He sings spiritual jazz with a light redolence of Andy Bey, and a heap of gospel’s influence. By now he’s considered an elder on the Los Angeles jazz scene, and in addition to running one of the city’s most influential community venues he has figured prominently into both of Kamasi Washington’s most recent albums; he’s also a member of in Pharoah Sanders’ band. Trible’s 2017 solo album, “Inspirations,” was unjustly overlooked — hopefully the same won’t be true of “Mothership,” out Friday. GIOVANNI RUSSONELLO

Kindly sentiments — “I never want to see you cry/I only want to see you shine” — arrive amid frantic rhythms in “Frens” by Obongjayar, a Nigerian singer and songwriter based in England whose voice puts a hoarse urgency atop a gentle core. Rooted in Afrobeat, the track pulls drums, bells, guitars, horns and more into a feverish affirmation that ends too soon. PARELES

Charli XCX’s 2014 album “Sucker” was a fistful of sassy, punky pop. And while the British singer and songwriter has been steadily moving away from that sound in her own work, there’s still a spot for it in her heart — and on her Vroom Vroom Recordings label imprint. Enter Nasty Cherry, a four-piece band whose first track, “Win,” was co-written by Charli and produced by Justin Raisen, who contributed to “Sucker” as well as Sky Ferreira’s like-minded 2013 LP “Night Time, My Time.” The vibe is ’90s angst rock welded to a Sia-esque chorus, and it is indeed a winner. CARYN GANZ

A chronicle of multiple romances and/or obsessions, from childhood crush to high-school infatuation to post-breakup rationalizations, “Never (Let You Go)” is two or three songs in five minutes by Deanté Hitchcock, an Atlanta rapper who sometimes slips into singing. Behind him, a slinky trap track segues into an even slower vamp that carries breathlessly accelerating but crafty rhymes: “Can’t waste my time thinkin’ ’bout all the time wasted.” His lyrics conclude, “I learned to let you go,” followed by an instrumental coda on solo piano, a quiet elegy to all the tumult. PARELES

Frankie Cosmos is releasing two tracks each week from her digital album “Haunted Items,” beginning with “Dancing” and “Tunnel.” They are miniatures, less than two minutes each, and decidedly bare-bones: just her voice, elementary piano parts and an occasional overdubbed harmony vocal. Obliquely and then with startling directness, both songs consider a broken relationship: “I cry more times a day/than you did in five years,” she suddenly reveals in “Dancing.” PARELES

A “duet” for a hologram world: Here’s an exhumed recording of Nat King Cole, who would have been 100 this week, with Gregory Porter’s voice dubbed in. The track begins with the two trading lines over a simple, two-beat rhythm — nice enough — but when Porter tries to weave new harmonies and ad-libs into Cole’s solo part, it all comes undone. RUSSONELLO

Vijay Iyer and Craig Taborn represent two different kinds of musical progressives. Both are pianists associated with the avant-garde, but Taborn, whose playing is more ephemeral, is a spectral figure, rarely spotted around the scene unless he’s playing a gig. Iyer seems constantly in the world, leading new bands and curating concert series, snapping up awards, teaching at Harvard and Banff. Each pianist, in his own way, has become about as respected as one can get in jazz. On a new disc, “The Transitory Poems,” they balance each other’s styles, Iyer playing the naturalist and the system-builder to Taborn’s fleeting, fugitive poet. On “Clear Monolith,” a sparse and jittery start gives way to a halting dance before a blues feeling steals in and pulls the two players together. By about the 5:30 mark, they’re playing more notes but sounding more serene. Then it all drops down again, and a new cycle begins. RUSSONELLO